Aboriginals lived in Australia for about 40,000 years before European settlement began in 1788. During that time they developed an amazing culture all based on survival. They found all of their food from the land. They developed an amazing religion that is based on the fact that everything was created in the Dreamtime, the time before time began. The Aboriginals connect their origins with the Dreamtime. There were hundreds of different tribes around Australia, all with unique languages. Artwork was traded between tribes and people had to learn many languages to be able to communicate with important tribes.

Don't use plagiarized sources. Get your custom essay on
“ Australian Aboriginal Culture ”
Get custom paper
NEW! smart matching with writer

When there was not enough food, the elders got the first choice of food. Many animal organs were saved fro the elders. For sacred reasons pregnant women, girls close to puberty and boys about to go through an initiation were denied foods. Across Australia many primitive ovens and other creations were used to help cook meat. A lot of the food eaten by the Aboriginals was unsafe when raw and untreated. To make foods safe fire was used for meats and fish, nuts and seeds were ground or roasted on coals.

Some other foods were also steamed and boiled.

The Dreamtime was the time before anything physical existed, the Aboriginals have many dreamtime stories (stories differed in every tribe) which explain how the physical world was created by a number of spiritual beings. Dreamtime stories nearly always have a moral and they contain laws which Aboriginal tribes all followed. Nearly all important things to the Aboriginals have a dreamtime story connected to them, Uluru was apparently a big flat sand hill that was turned into stone by a deed of some beings. Dreamtime stories were told in many different ways, they were spoken, sung, danced, painted and carved onto rock. Many caves have been found around Australia with Aboriginal carvings on the walls. The Ancestors who created everything are left in the physical world as rock formations, plants, animals and bodies of water. The Aboriginals believe this is to remind them to follow the laws stated in the Dreaming stories.

Many historians and geographers believed that the Aboriginals walked to Australia from Asia about 40,000 years ago when the seas were shallow and there was a land mass connecting Australia and parts of Asia. The aboriginals however, believe that their origins are explained in the Dreamtime. They believe that when their Ancestors created everything, the Aboriginals came from the land. This leads to them believing that they have always inhabited Australia. The Aboriginals believe many important animals moved around in the Dreamtime to create the entire physical world. Every small pebble had been created because of something one of the Dreamtime beings had done. Wherever one of the beings died a sacred place appeared (such as Uluru) and when all of the beings were gone the Sun and Moon were created and Man was left on Earth.

It is estimated there were around 700 different languages spoken in Australia before European settlement. Aboriginal tribes made sure their people knew the languages of the nearby tribes, so they could form alliances. Tribes had meetings with each other to discuss when and where trade was to occur, when people could enter other tribe’s land and when meetings and ceremonies would be held. Another reason alliances were important was so that the allies could help tribes in war. This was because many of the tribes around Australia waged war on each other. If tribes were allied then the members of the tribe were free to marry members of the other tribe.

In the time that Aboriginals had been in Australia developed a unique culture. They had fascinating ways of finding and cooking food. The social life was very complex with all tribes speaking different languages. Their religion was unique, and controlled a lot of what they did in their lives. Overall, the Aboriginal culture is amazing, fascinating and complex in many ways unimaginable to us. 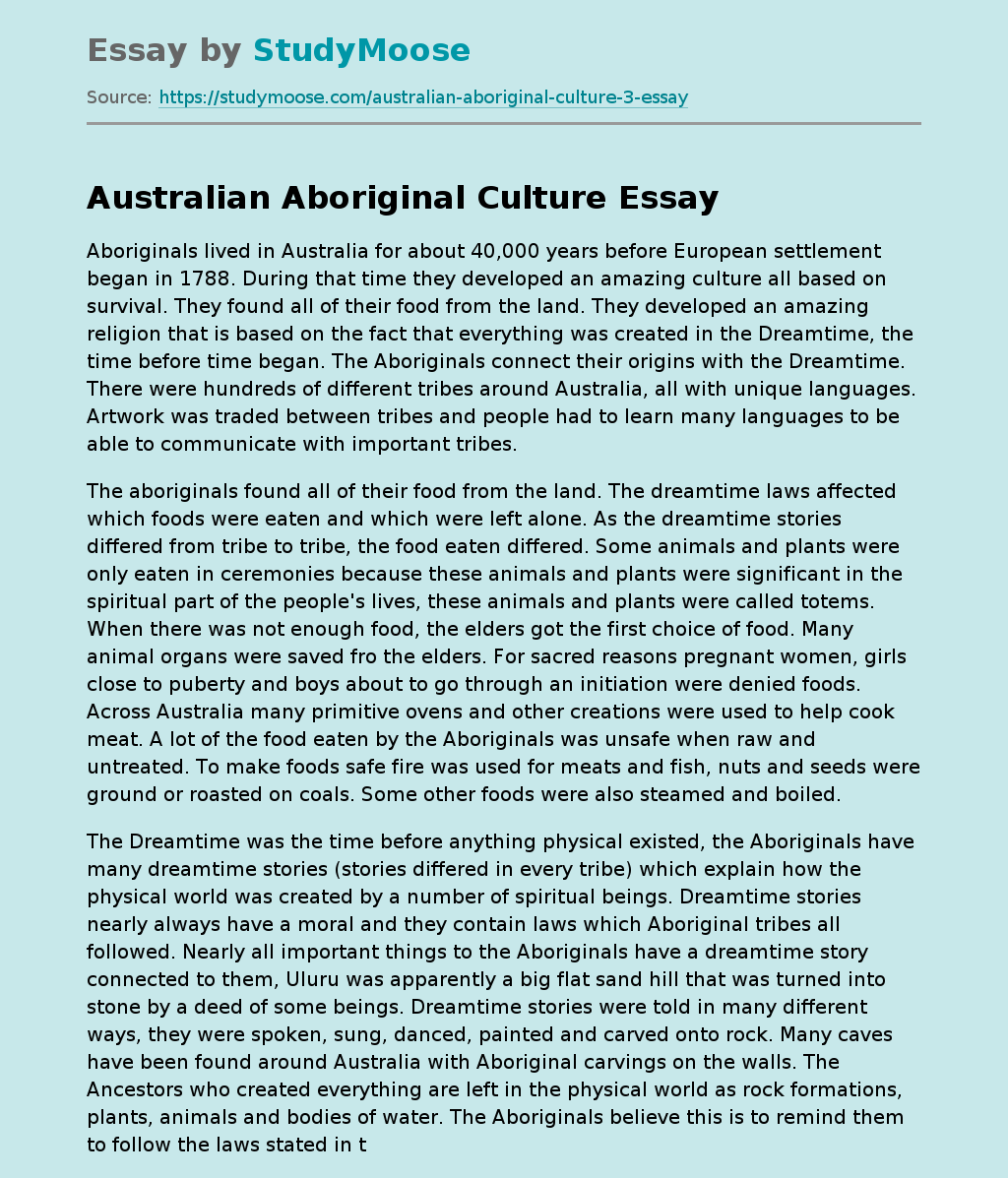