Augustine of Hippo and The Moral Thing

A newspaper columnist signs a contract with a newspaper chain. Several months later she is offered a position with another newspaper chain at a higher salary. Because she would prefer making more money, she notifies the first chain that she is breaking her contract. The courts will decide the legality of her action. But what of the morality? Did the columnist behave ethically?

The newspaper columnist in this problem is concerned, like most anybody, with making the best living that she can.

In her mind, the right thing to do is to go to the job that gives her the higher salary. Although she had a contract, she notified the chain before actually leaving. In my opinion, the columnist did behave ethically. She does what she has to do in order to support herself, or possibly a family. She notified the chain in advance in order to give them the time to find someone to replace her position. She has done the right thing and there is nothing wrong with that.

The columnist is behaving ethically.

St. Augustine believed that “faith must precede reason and purify the heart and make it fit to receive and endure the great light of reason.” He might have believed that the newspaper columnist should not leave the first newspaper chain because she signed a contract with them. Breaking the contract is not entirely the right thing to do. She must be faithful to the first company because that came first, and faith comes before reason.

Aquinas might have believed differently from Augustine in this case. “Aquinas pushed for the elimination of guilt as a motivator, and continued Augustine’s movement to allow the Sciences to rediscover a place in Christian society.” He would not want the newspaper columnist to feel guilty for leaving one job for another. She should do what she believes is right. Making more money at the other newspaper chain is what she believes is moral and the best decision for her.

An airline pilot goes for his regular medical checkup. The doctor discovers that he has developed a heart murmur. The pilot only has a month to go before he is eligible for retirement. The doctor know this and wonders whether, under these unusual circumstances, she is justified in withholding the information about the pilot’s condition.

In some ways, the doctor’s morals are in the right place. She wants to help the pilot in more ways than one. While of course she wants to make sure he is healthy, she also does not want to jeopardize his chance for retirement. The question is, is this her decision to make? Her heart may be in the right place, but this is not her decision to make. The pilot has the right to know what is going on with his heart and his health. If he decides to put it off until he retires and pretend it is not there then that is his decision. Although she is only trying to help, the pilot has the right to know, whether or not the doctor believes he will be better off if he does not know for another month.

St. Augustine might have solved the problem in the same way. The moral thing to do is to tell the pilot what is wrong with him, whether or not withholding the information might help him. In this case, the doctor’s reason would come first, because the reasonable thing to do is the right thing to do. Aquinas, on the other hand, might actually have solved the problem differently. Without worrying about feeling guilty for not telling the pilot as soon as she found out about the heart murmur, she would withhold the information so that the pilot can retire as he had planned. In her mind it would be moral because she would be helping him. She knows it is a small enough problem that the information can be withheld for that month and he will not suffer any consequences.

Augustine of Hippo and The Moral Thing. (2016, Sep 20). Retrieved from http://studymoose.com/augustine-of-hippo-and-the-moral-thing-essay 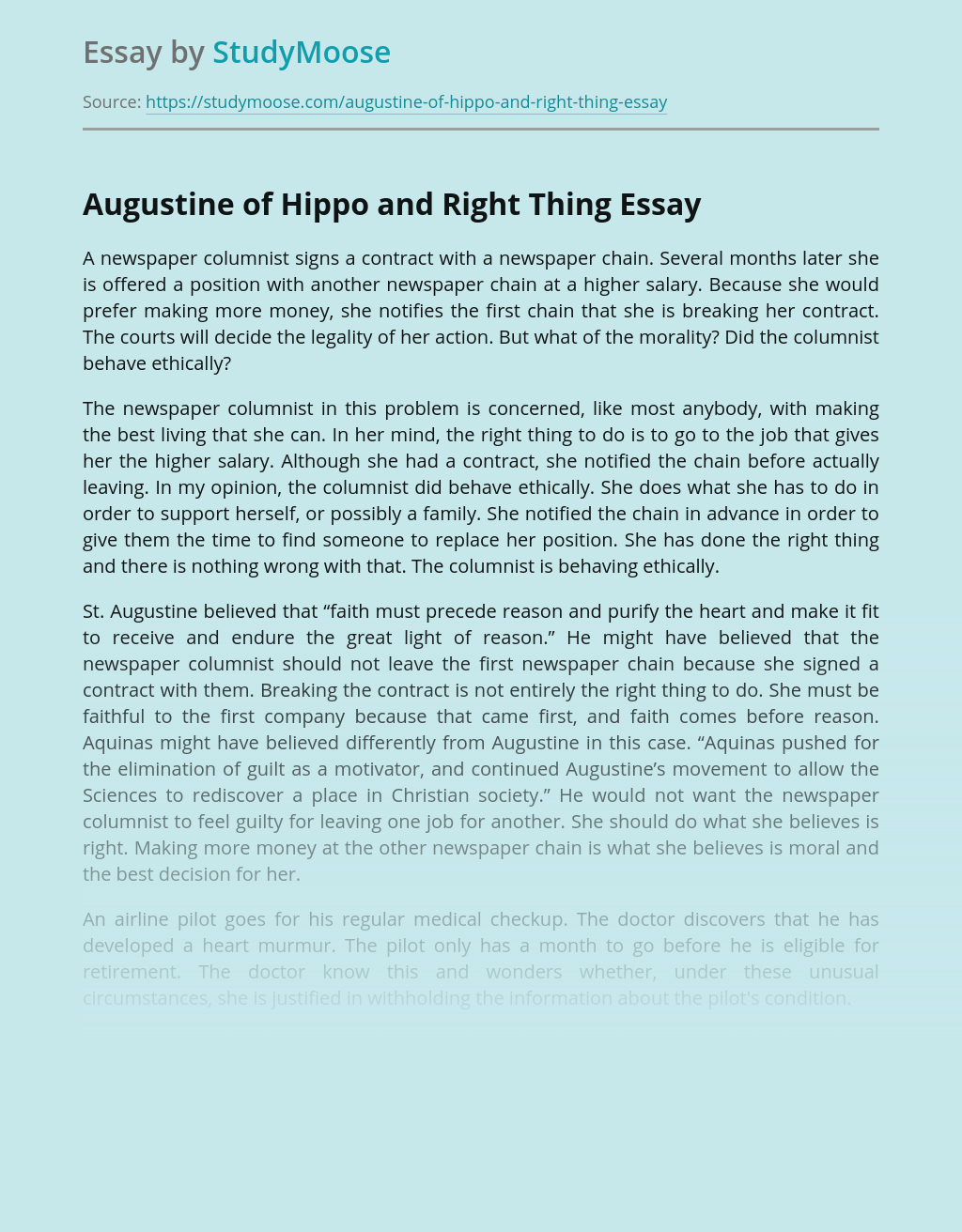 Don’t waste time
Get a verified writer to help you with Augustine of Hippo and The Moral Thing
Hire verified writer
$35.80 for a 2-page paper
Stay Safe, Stay Original