Attitude, Legislation and Litigation towards Students with Disabilities

Understanding of children and adults with learning disabilities has come full circle but has a long way to do to fully reach every individual. In the 4th century the great philosopher Aristotle wrote,” As to the exposure and rearing of children, let there be a law that no deformed child shall live…” (Hardman, Drew, & Egar, 2011) While this seems brutal, for the times it was quite common. Even modern era societal groups like the Nazis in the 1940s had “cleansing programs,” were thousands of people with various disabilities were deemed useless and simply put to death like dogs and cats.

Don't use plagiarized sources. Get your custom essay on
“ Attitude, Legislation and Litigation towards Students with Disabilities ”
Get custom paper
NEW! smart matching with writer

Today we as a society try to better understand the trials of people with disabilites and help them to succeed in schools. Federal groups like Individuals with disabilities Education Act(IDEA) and the Americans with Disablilites Act(ADA) have pushed our thinking and laws to the future. Although there is a lot more that needs to be done we are moving in the right direction.

A Sad Beginning As mentioned above there was not just a prejudice and fear but a man hunt for people who suffered any kind of discernible disability.

In ancient Rome and Greece children with disabilities were viewed as signs of weakness and shame. These children were put to death or abandoned, considered a burden on society and humanity. There were ancient societies that did not believe in this process but they were not the majority. The 20th century saw an increase in help for students with disabilities but there was a contradiction in the approach to this help.

There was blame placed on the parents for breeding a genetically inferior human and putting the financial burden on the government for their mistake.

Fear of these deficiencies spreading lead to a restriction on who could marry and even the sterilization of persons with retardations. In an ease of the sterilization idea people were being put into “hospitals” to isolate them from the general public by placing them “with their own kind. ” In the 1950s more than a million persons in the US had been committed to mental hospitals and institutions. (Hardman, Drew, & Egar, 2011) The First Groups to Fight In the movement of Civil Rights in the 1950s parents of children with disabilities began to push for rights also.

In 1949 the United Cerebral Palsy Organization (UCP) and in 1950 the National Association for Retarded Children (NARC) groups were formed to help get accurate information to the public. These organizations wanted to get equal rights for medical treatment, social services and education for persons with disabilities. It was not until President Kennedy stepped in and became an advocate for these groups that the government began to take these groups serious. He had person investment in these rights with his sister Rosemary suffering from intellectual disabilities.

Kennedy said in a speech in 1961,”This neglect must end…We must act…” The subheading above would be used if there are several sections (Hardman, Drew, & Egar, 2011) Legal Cases that Pushed reform I n1972 the Wyatt case in Alabama argued that the facilities people with mental retardation were being put into did nothing to prepare them for a place in society and called these places “Human Warehouses”. These were a series of lawsuits that followed with the moral encouragement of Brown vs. The Board of Education civil rights law. Halderman vs.

Pennhurst State School and Hospital, Youngberg vs. Romeo and Homeward Bound vs. Hissom Memorial Center were all influential court cases that brought civil and moral rights of persons with disabilities to the public forum. It was the parental involvement that pushed the government to form groups as advocates for these groups. In 1971 the Pennsylvania Association for Retarded Citizen (PARC) vs. the Commonwealth of Pennsylvania put into light that these children were being denied the right to free and appropriate public education.

It was these groups that allow the education for students with any disability to now get the help they need and deserve. Modern Advocacy Groups The main groups that come to mind when Disability advocates are mentioned within the educational system are Individuals with Disabilities Education Act (IDEA) and Americans with Disabilities Act (ADA). IDEA is officially known as Public Law 94-142 which lays out the standards and rules for students from ages 3-21 in public schools. This was originally known as Education for All Handicapped Children’s Act but in 1990 was changed to IDEA.

There is restriction for what qualifies as a disability and these are in constant adjustment based on what happens in the education system. Without this ability to add or take away ideas it would become stagnant and useless. The ADA lays out what these disabilities are and what they legally and morally have a right to. Challenges facing Educators The main challenge facing educators is a combination for the push of standardized testing, common core standards and federal assistance being based on those scores.

The inclusion of students with disabilities in no different than having a bully or an extreme introvert in your class and the amount of help that is given has risen drastically over the last 40 years. The focus in high school is to prepare students to go into the world and succeed as adults and this applies to students with disabilities also. The main fear I have is that in a push to “include” these students we are not helping them to succeed just following legal options.

We have come full circle from the days of Aristotle and the Greeks but have a long way to go to get to a point where we are doing what is best for every student in our delusional system. There is and will probably always be prejudice in society to one group or another but as teachers we need to step forward and praise differences not separate them. Laws like IDEA and the ADA help parents, schools and teachers have a foundation to build on but it will take more that theory to implement the right actions. The success of these groups and laws are yet to be fully recognized but the potential is there.

Attitude, Legislation and Litigation towards Students with Disabilities. (2018, Oct 28). Retrieved from https://studymoose.com/attitude-legislation-and-litigation-towards-students-with-disabilities-essay 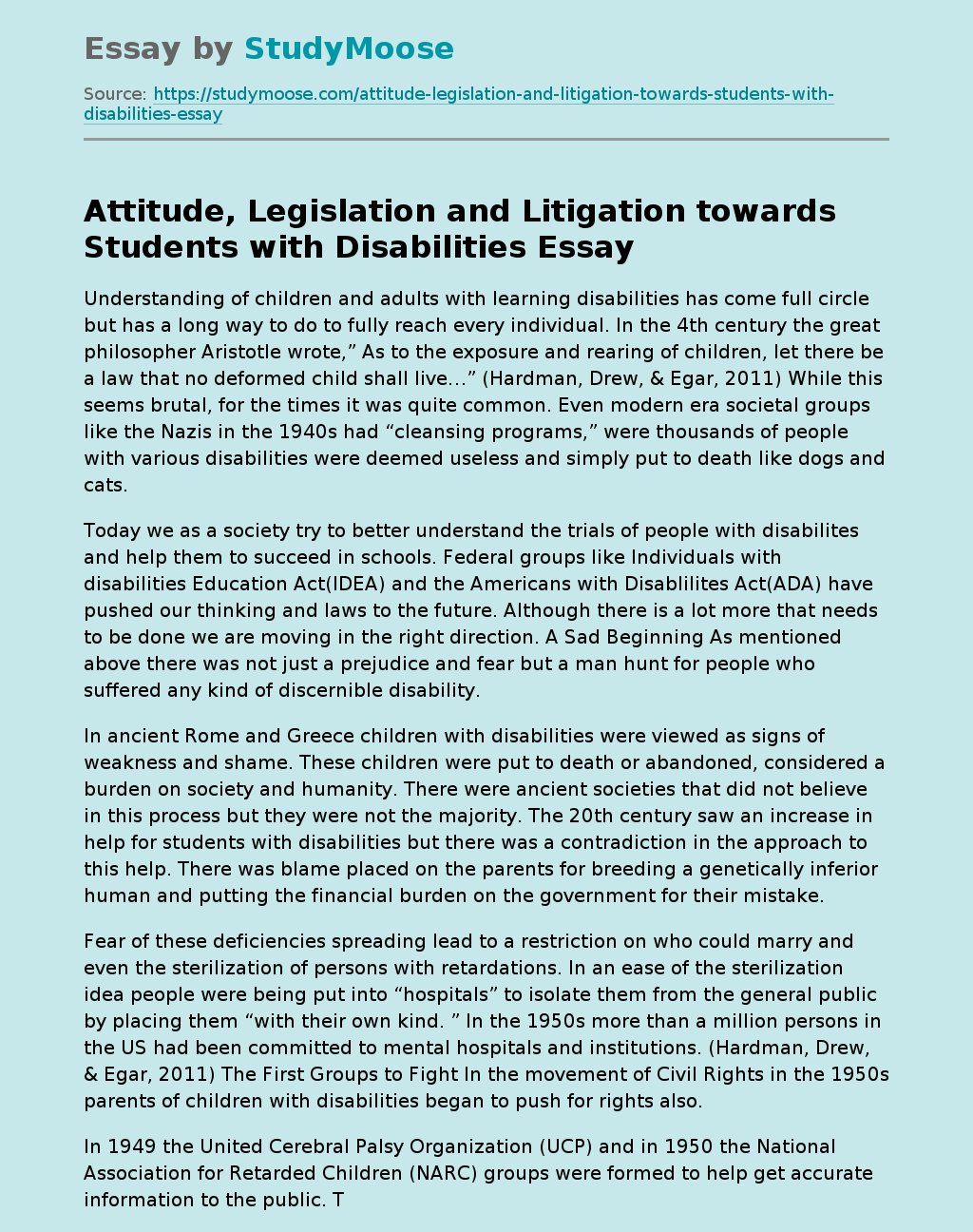