Atticus' Impact in To Kill A Mockingbird

This was greatly influenced by their father, Atticus and the case of Tom Robinson in which Atticus was defending Tom. Atticus was a proud and dignified person in Maycomb. Everyone in Maycomb respects him and he also respects himself. When Atticus was given the case of Tom Robinson, because he always wants to do what he sees as being right, he has to take Tom’s case because he sees this as his duty. Although he knows this case was a lost one because of the racial society he lives in where a white person’s words always triumph over a black person’s words, he still tries his utmost best to defend Tom Robinson.

Don't use plagiarized sources. Get your custom essay on
“ Atticus’ Impact in To Kill A Mockingbird ”
Get custom paper
NEW! smart matching with writer

I’ve got to live with myself” is how he explains his determination to Scout.

If he didn’t defend Tom, he “couldn’t hold up his head in town. ” Because his would have proved that he was as just as racial as the Maycomb folks.

Atticus was “the deadest shot in Maycomb County” and he was nicknamed “One-Shot Finch” but he never boasted about his talent and he certainly disapproves of Scout boasting on his behalf. Despite his many talents, Atticus was a modest man. He never looks down on others despite his achievements, career and education status.

He respected people of colour. A perfect example of this was that he lets Calpurnia run his entire household. Atticus was constantly criticized and attacked by members of the community of Maycomb before and during the trial but he does not take advantage of his social standing to retaliate or rebuke them.

He remains clam when he was provoked directly. When Bob Ewell spits in Atticus’ face and Bob Ewell said “Too proud to fight? ” Atticus simply replied “No, too old. He just wipes his face after Bob Ewell was finished swearing at him and walked off calmly. This showed that Atticus has more character than Bob Ewell. After that scenario, Atticus thought that Bob Ewell let all his anger out but this was one of Atticus’ few mistakes of judgement of character where this shows that he was not perfect, he was human. Atticus treats his children as intelligent individuals, where if they ask him a question, he answers in a clear matter – of –fact way and he answers his questions directly.

A good example of this was where Scout does not want to go to school because she cannot read in school; he clearly explains what it actually is. “Do you know what a compromise is? ” he asked. “No, an agreement reached by mutual concessions. It works this way,” he said. “If you’ll concede the necessity of going to school, we’ll go on reading every night just as we always have. ” That compromise also shows that Atticus has good parenting skills. Atticus was a very fair person, so in instances of an argument, he listens to both sides of the story and then concludes a verdict.

This was told to the reader when Scout was explaining to Uncle Jack why he wasn’t fair in dealing with the situation with Scout and Francis “Well, in the first place you never stopped to gimme a chance to tell you my side of it—you just lit right into me. When Jem an’ I fuss Atticus doesn’t ever just listen to Jem’s side of it, he hears mine too” Atticus has never beaten his children but he firmly scolds them in certain situations. For example when he makes Jem go and read for Mrs Dubose “Atticus, she wants me to read to her.

Yes sir. She wants me to come every afternoon after school and Saturdays and read to her out loud for two hours. Atticus, do I have to? ” “Certainly,” said Atticus. In conclusion, we all, as readers, see that Atticus has an impact in some way on every person living in Maycomb county either directly or indirectly. Also, we see that Atticus tries his best to grow up his children in the best way possible and answer all their questions when asked instead of just delving into another topic.

Atticus' Impact in To Kill A Mockingbird. (2018, Aug 23). Retrieved from https://studymoose.com/atticus-impact-in-to-kill-a-mockingbird-essay?post 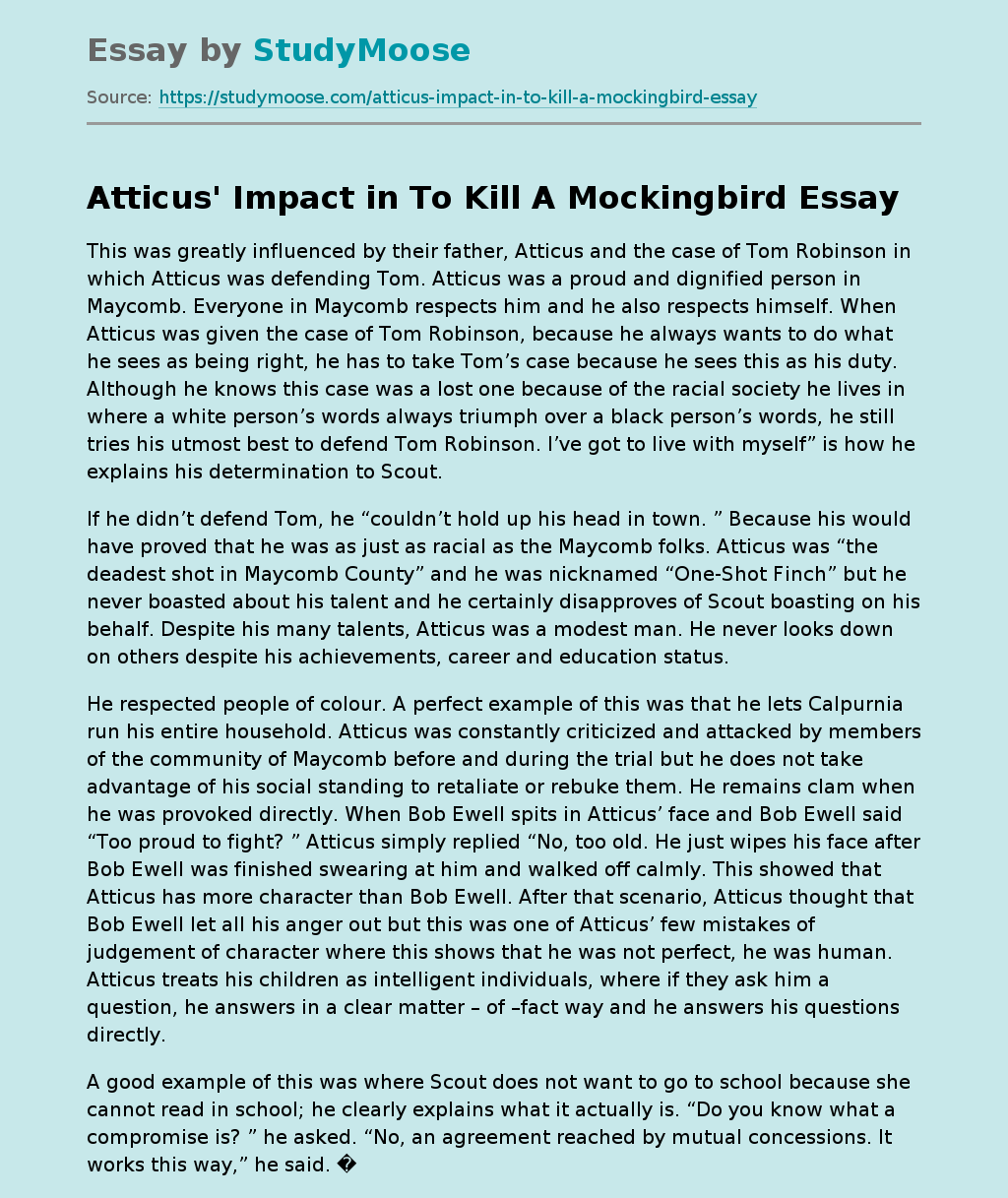