Atticus Finch in "To Kill a Mockingbird"

Atticus is a great father to the kids because he educates his children, and he is a good father because he is committed to equality. Unlike most of the parents in the Maycombian Society. Atticus is committed to equality in all forms. All throughout the book, Atticus treats Jem and Scout as equals. Fathers are important role models who raise and nurture their children with much love.

A good father is a man who protects and provides for his children, who disciplines his children, and who tries to bring them up to know the difference between good and bad.

Don't use plagiarized sources. Get your custom essay on
“ Atticus Finch in “To Kill a Mockingbird” ”
Get custom paper
NEW! smart matching with writer

Fathers should be there for their children in all times of need, to help and comfort them. Atticus is controlled by his children. He spoils them by letting the kids do what ever they want to do. Atticus is that kind of father that can not say no.

Atticus is portrayed as a good father to the kids because he acts like a teacher to them like the kids are being homeschooled.

He treats people the same and and allows the children to develop there own traits and personalities. One of the ways Atticus educates the kids is by only passing the lessons that he had learned when he was a kid. Not only passing on the lessons but he puts the lessons in the way that the children can understand. Another way that Atticus teaches Scout is by teaching her to read at an early age.

Atticus is a normal person with a unique parenting style he does not follow the normal rules of the Maycombian lifestyle that other parents use to raise there children.

He believes that all children should be able to make there own decisions and to be able to develop there own personalities. He gives the kids freedom because he believes he can trust them to behave. But as soon as they misbehave he quickly sets them back on track. In conclusion Atticus’s parenting methods and his ways of showing affection have positively affected his children’s personalities.

Atticus Finch in "To Kill a Mockingbird". (2020, May 24). Retrieved from http://studymoose.com/atticus-finch-in-to-kill-a-mockingbird-essay 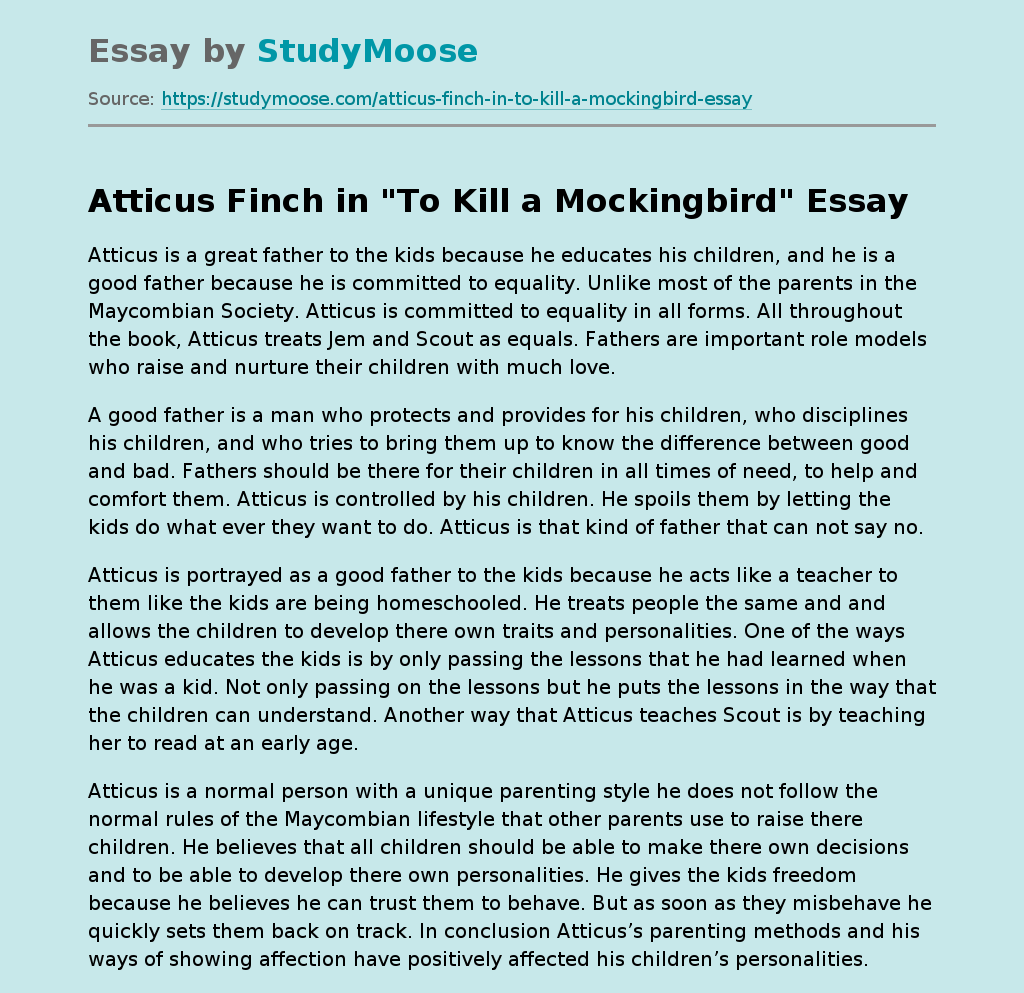