Atonement as a Concept of Theology

Atonement in the larger sense deals with a common factor which is sin. The definition is a making at on which points to a process of bringing those who are enstranged into a unity(Douglas, 107). It is a theological term which derives from the Anglo-Saxon. The word atonement appears eighty seven times in the Old Testament in the RSV Bible(Nelson, 55). According to Strongs Exhaustive Concordance, which is using the King James Version, appears seventy seven times in the Old Testament and only once in the New Testament.

Don't use plagiarized sources. Get your custom essay on
“ Atonement as a Concept of Theology ”
Get custom paper
NEW! smart matching with writer

In Leviticus, atonement appears fifty one times, more than any other book of the bible. In Numbers it appears seventeen times and in Exodus eleven times. The reason why it is used so much in Leviticus is that during that time period priest were intercessor’s between the people and God. In the New Revised Standard Concordance, atonement appears eighty seven times.

Out of those eighty seven times, eighty one appear with the word make or made.

This would constitute that an atonement in these uses would cause the person who prepares the atonement to work at making an atonement. We find that in the New Testament we don’t have to work to receive a pardon from our sins. The whole bible leads up to the cross and everything after the cross points back to the cross. Christ was the ultimate and final atonement for us. In the Old Testament their atonement to God was to always be unblemished for the sake of perfection (Morris, 147).

They believed that the perfect atonement would set them free from all their sins and thus make them clean in God’s eyes.

The Hebrew word for atone is . It is used frequently for the process of sacrifice. It was thought that a man must make and atonement to God that was adequate to give to Him to pay for his sin. In Ezekiel 16:63 atonement is translated to mean “forgive”. Words in the Old Testament are translated from the kpr word group in Hebrew. The Hebrew word for atonement is Kaphar. This is the main usage of the word but there are other words that are associated with atonement. or Kaphar means to cover.

The figurative word which is used quite often is to expiate or condone. Other words associated with Kaphar are to be merciful, pardon, to pitch, purge(away), and to make reconcile. Or Kaphar is used for a village that is protected by walls. Or Kopher is also a cover or village covered. It is also bitumen which was used for a coating and dyeing colors. Words associated with Kopher are redemption, price, bribe, camphire, pitch, ransom, satisfaction, village. An interesting side point to the word Kopher is that it also denotes finger nail polish. Oriental females make a powder of camphire leaves then made the powder into a paste by use of water and put in on their finger which gave them a reddish color. The word camphire comes from the same root as atonement just as a sinner could pray for a colorful cover for his soul that was ruined by sin. Or Kippur means expiation but only in the plural. Expiation is found numerous times in the Old Testament for example in 2 Samuel 21:3, 1 Chronicles 6:49, and 2 Chronicles 29:24. The denominative verb which is to make an atonement, make reconciliation, or to purge is or Kapar. There are three parent nouns for atonement and they are Koper, Kippur, and Kapporet.

Koper or means ransom or gift to secure favor. Exodus 30:12 and Isaiah 43:3 uses ransom and this is parallel to the word redeem. In 1 Samuel 12:3 Koper is used as “bribe”. Kapar means to atone by offering a substitute. This may be better understood if you use ransom with Koper (Harris, 453). Kippur or is used in the “Day of the Atonement”. This was celebrated by a special sin offering for the whole nation and only the high priest could be allowed to sacrifice a goat. A second goat was released as an escape goat to symbolize a total removal of sin.

Kapporet is a noun which means mercy seat. It is used twenty seven times and always refers to the golden cover of the sacred chest in the inner shrine of the tabernacle or temple (Harris 453). Kapar or is to cover over with pitch. The cognate word is used in the Babylonian flood story and denominative verb is used only once in Genesis 6:14 in waterproofing of the ark. Atonement is use much more in the Old Testament because all of this was before Christ suffered for our sins. A lot of the books always kept saying that He died for our sins and that’s true. But He also rose from the dead and they often times leave that part out. Sacrifices were made to redeem themselves in the eyes of God before Christ but since he atoned our sins, we no longer must give sacrifices.

In the New Testament, atonement is found only once according to Strong’s exhaustive concordance and that is in Romans 5:1. In the NRSV it is found twice in Romans 3:25 and Hebrews 2:17. Translated in Greek it means Katallage or reconciliation. Reconcile is found two times, reconciled five times, reconciling one time, and reconciliation four times. In Greek the most common verb is and the noun . Paul is the only other in the New Testament that uses the word atonement or reconciliation. The basic meaning of reconciliation is to make otherwise. The transitive of it is to alter or to give exchange (Kittel, 251). Is to alter by removal, to do away, to liberate, to withdraw, or to escape. Means to reconcile. Means the exchange effected. Then the reconciliation, ( for which and are generally use). “It denotes the result of the diving salvation, i.e. the new molding of the relation in which the world stands to God, so far as it no longer remains the object of His wrath(Bullinger, 75).

As said in class by yourself, “words don’t have meaning, they have uses.” There are many uses of the word atonement in the Old Testament but that was before the cross. After the cross there was no need to make an atonement for ones sins. Without sin, there would be no atonement in the Old Testament. Sin is the factor that of all atonement’s. Sin is the reason for atonement which is no longer needed because of Christ. On a personal note, I would like to express how much more this paper did for me just learning about how to do a word study or learning about atonement. I was hungry one night so I headed to McDonalds to go eat. I took my research with me to organize it and work on it. I met this couple with a five year old daughter. They began asking me what I was working on and why.

What my major was and questions like that. I began to witness to them and they were so receptive and want to know what I believed and stuff like that. They did not seem to know a whole lot about the church, they did not even know what a youth minister was. I felt sorry for their daughter. She probably didn’t have the best home life and they did not seem to care about her a whole lot. I don’t write this to try to get a better grade, I hope it doesn’t affect my grade at all. I just wanted to share with you how this paper was the reason I was able to witness to a couple and their daughter and to spread happiness into their lives.

Atonement as a Concept of Theology. (2021, Nov 01). Retrieved from https://studymoose.com/atonement-as-a-concept-of-theology-essay 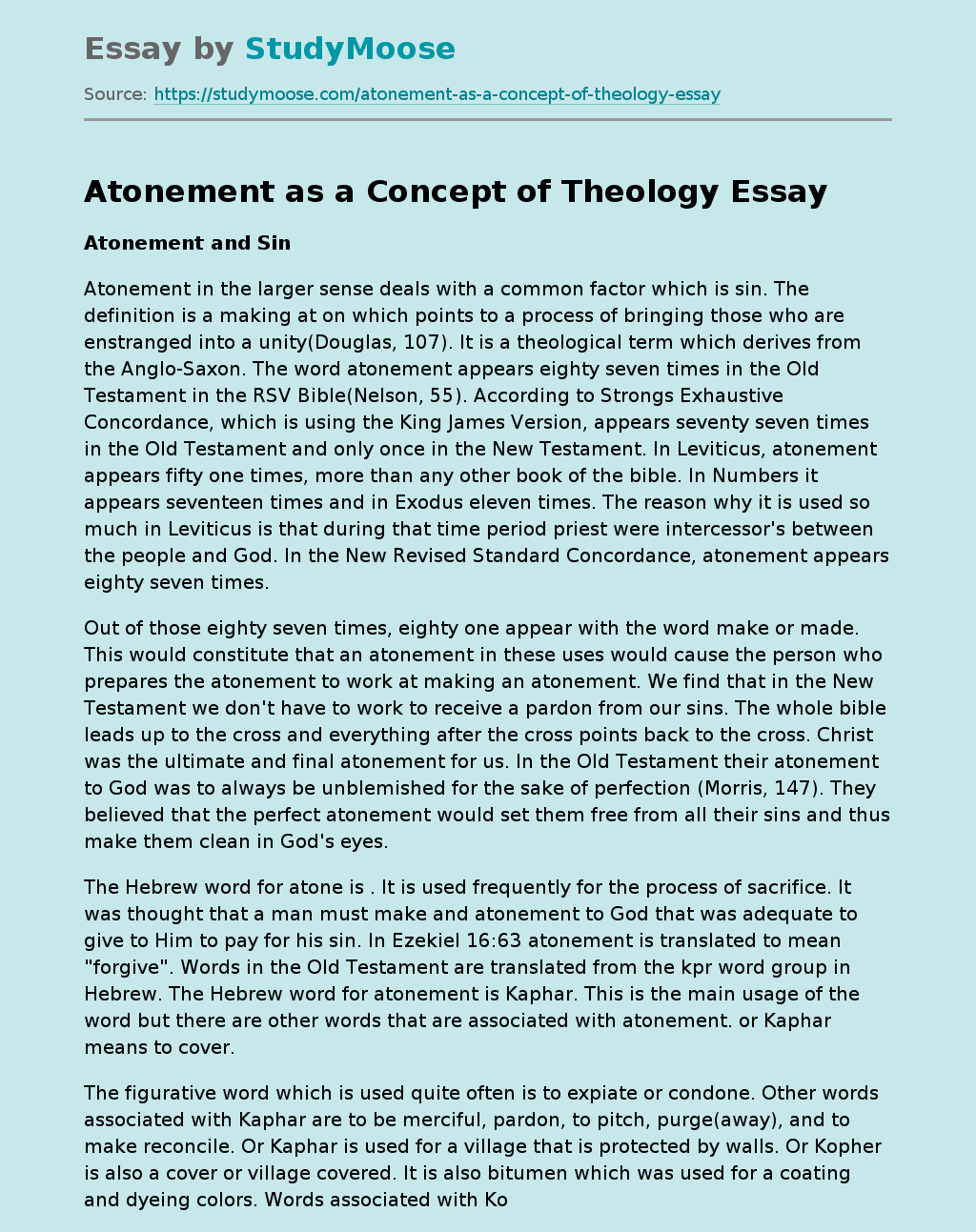