Athens in the Time of Pericles - Religion Death and Burial

Pericles lived from 495-429 BC. During this time, religion was inextricably linked with Athenian society. It contributed to a lot of Athenian culture and the many aspects of religion were depicted through buildings, artworks, festivals and every day rituals. Gods and Goddesses In Greek mythology there were 12 main gods, that were prayed to and worshipped by the Athenians. It was said they lived on top of Mount Olympus. They resembled human form and through their stories of love, war and passion they were also viewed to have human feelings.

Don't use plagiarized sources. Get your custom essay on
“ Athens in the Time of Pericles – Religion Death and Burial ”
Get custom paper
NEW! smart matching with writer

Dio Crysostomos (97 A.D) declared the image of Zeus so powerful that, “If a man, with a heavy heart from grief and sorrow in life, will stand in front of the statue, he will forget all these.” Athena (Patron goddess of Athens and daughter of Zeus) Heaven War, wisdom and crafts.

Evidence of Athena being the patron goddess is the Athenian silver tetradrachm from 454-404 BC.

Like on the coin, she’s generally depicted wearing a helmet and shown with an owl or olive tree as they were sacred to her. According to mythology, she gifted the olive tree to the city of Athens. Tara Heaslip Wednesday, 19 June 2013 6:12:56 PM Australian Eastern Standard Time

Attica. Athens, c. 454-404 BC. Silver “old-style” tetradrachm. Head of Athena right, wearing crested helmet ornamented with olive leaves / Owl standing right, olive sprig and crescent moon behind. Apart from the main 12 gods and goddesses there were many others that were just as popular and worshipped just as much, for example, Dionysus. There is much evidence of the belief in these gods such as paintings, artworks and inscriptions, for example, a vase that has been dated back to 470-460 BC which depicts Zeus.

Amphora, 470-460 B.C. This vase depicts Zeus aiming a lightening bolt at a giant with an eagle perched on his hand. Beliefs, practices and organisations Religion was a fundamental aspect of Greek life and the Athenian people incorporated it into their everyday lives as they believed their lives were dependent on the gods. It was believed that gods could interfere in the lives of men, so prayer was used by the people, so the gods would take favour and act kindly towards them. Xenophon said “The gods know everything and they give forewarnings to anyone they choose through sacriﬁces, omens, voices and dreams.”

The Athenians used sacriﬁces, temples and prayers to honor particular gods and goddesses. They believed in the three ‘Fates,’ Clotho, Lachesis, and Atropos. Clotho was the youngest, she spun the thread of destiny with a distaff and determined the time of birth of an individual. Lachesis measured the thread length to determine the length of life and Atropos cut the thread of life, determining the time of death. Worship of the gods consisted of rituals and ceremonies. The relationship between human beings and deities was based on the concept of exchange; Gods and goddesses were expected to answer prayers and humans were expected to give gifts and sacriﬁces.

Evidence of the sacriﬁces made by the Athenians came from Lysias (around 400 BC) who stated, “By performing the proper sacriﬁces, our ancestors left our city the most powerful and prosperous in Greece. It is therefore right that we offer the same sacriﬁces as they did, if only for the sake of the good fortune which has resulted.” Sacriﬁces were the central ritual act performed by Athenians. Animals sacriﬁced had to be willing, therefore they would sprinkle water on it so it’ll lift it’s head and ‘nod’. The richer families gave a blood sacriﬁce almost everyday, however the poor couldn’t afford it. Treasuries were built at Olympia and Delphi to store generous offerings. Evidence of this is part of a female face with inlaid eyes which has been dated back to 4th cent. BC.

Ancient Greek Votive offering, 4th cent. BC, set in a niche of a pillar in the sanctuary of Asclepios in Athens Athenian religion was characterised by a diversity of cults. People joined cults because they wanted a closer connection with one particular god. Although everyone believed and worshipped all 12 Olympian gods there were cults to speciﬁc gods, especially those not apart of the Pantheon. Evidence of the cults was the Votive plaque which dates back to the mid-4th Century BC and depicts elements of the Eleusinian Mysteries, which was a cult which celebrated Demeter and Persephone.

Votive plaque, discovered in the sanctuary at Eleusis (mid-4th century BC) Private worship included family prayers and wine offerings. In the home, there were household shrines and many people offered daily libations to different gods. Private rituals included prayers, meals and storytelling. This god would be chosen depending on the families needs and lifestyle. E.g. Demeter, if they were a agricultural/farming family. They would pay this god special honor but made sure they didn’t exclude any of the others. Worship of the gods also took place publicly. Public meetings opened with recognition of the gods, festivals were dedicated to the gods as were temples, statues and artworks and many sacriﬁces made to the gods were a public event.

Mockery of the gods wasn’t regarded as blasphemy and was accepted in athenian life. Evidence of this is Aristophanes play, The Frogs, which depicts Dionysus as cowardly, gluttonous and morally depraved, was acted at Athens at the Lenaean festival (B.C. 405). Temples and Sanctuaries The Acropolis is the oldest part of Athens, it’s the sacred hill and during the reign of Pericles it became the place of the most famous Athenian temples, shrines and statues dedicated to the Gods. Pericles’ building program further evidences the Athenian’s devotion to the gods in all aspects of daily life. Pericles built many temples in honour of the various gods and goddesses, particularly to Athena, to thank her for Athens’ success in the Persian wars.

The Parthenon was a temple built on the Acropolis in 448-432 BC. It was built in dedication to Athena for the salvation of Athens and Greece in the Persian wars. It was also used as a treasury. A statue of Athena was built, by Phidias, inside which stood 10 meters tall, made of ivory and gold. A big part of the Parthenon is the Panathenaic Frieze, which was made to depict the Panathenaic festival. Metopes were sculpted into the Parthenon. On the east side the struggle between the gods and the giants was depicted, on the west side was an Amazonomachy, on the south side the battle between the lapiths and the centaurs was shown and depicted on the north side was the Trojan War. There were also many pedimental sculptures which depicted images such as the contest between Poseidon and Athena.

South Metope 31, Lapith and Centaur, 447-432 B.C. The Erechtheum is a temple on the northern side of the Acropolis and was dedicated to Athena and Poseidon. It was built between 421 and 407 BC and was designed to accommodate the Plynteria and the Panathenaia. Within the temple lived the sacred snake, which represented a spirit who was thought to keep the city safe. The snake was fed honey-cakes by the priestesses of Athena Polias. The snake’s occasional refusal to eat the cakes was seen as a bad omen.

Festivals The Panathenaia is a festival held annually and is the most important as it was dedicated to Athena. It’s held on the 28th day of Hekatombaion which is believed to be Athena’s birthday. Every four years the festival would be extended with many games and a contests being held, this was known as the Greater Panathenaia, whilst the festival held every other year was known as the lesser Panathenaia. The festival holds great religious signiﬁcance however it was used to implement the power and political supremacy of Athens. A large part was the Panathenaic games included solo and group contests.

The games began with individual activities such as wrestling, horse drawn chariot races and the pentathlon. The individual contests were open for all greek citizens however the group contests were reserved for Athenian citizens. The group contests consisted of a beauty contest between athletes, military dances and a mock combat. Participants from all over Greece were also invited to participate in musical and poetry competitions. A torch race took place in the evening and was then followed by a night of dancing and singing. Evidence of these competitions was the Panathenaic amphoras, which were given to the winners of competitions as a prize.

Amphora, depicting a musician performing with a music instrument used in festivals, 490 B.C. The next day held one of the most important aspects of the festival which was the Panathenaic procession. During this procession a peplos was given as a gift to Athena. A new one was woven and decorated for her every year. It was an honor to be chosen as one of the Ergastinai to make the peplos. Many offerings were brought on to the life size statue of Athena at the end of the procession. Only citizens were allowed to the Acropolis, everyone else remained at the gateway. The Hecatomb was made at the Acropolis. Upon the altar of Athena meat from sacriﬁced animals such as cows and sheep was used in a ritual meal to end the festival, however only certain people were invited to this. Evidence of the Panathenaia and the procession is the Parthenon frieze depicts many aspects of the festival such as the procession and the games.

Athens in the Time of Pericles - Religion Death and Burial. (2016, Oct 27). Retrieved from https://studymoose.com/athens-in-the-time-of-pericles-religion-death-and-burial-essay 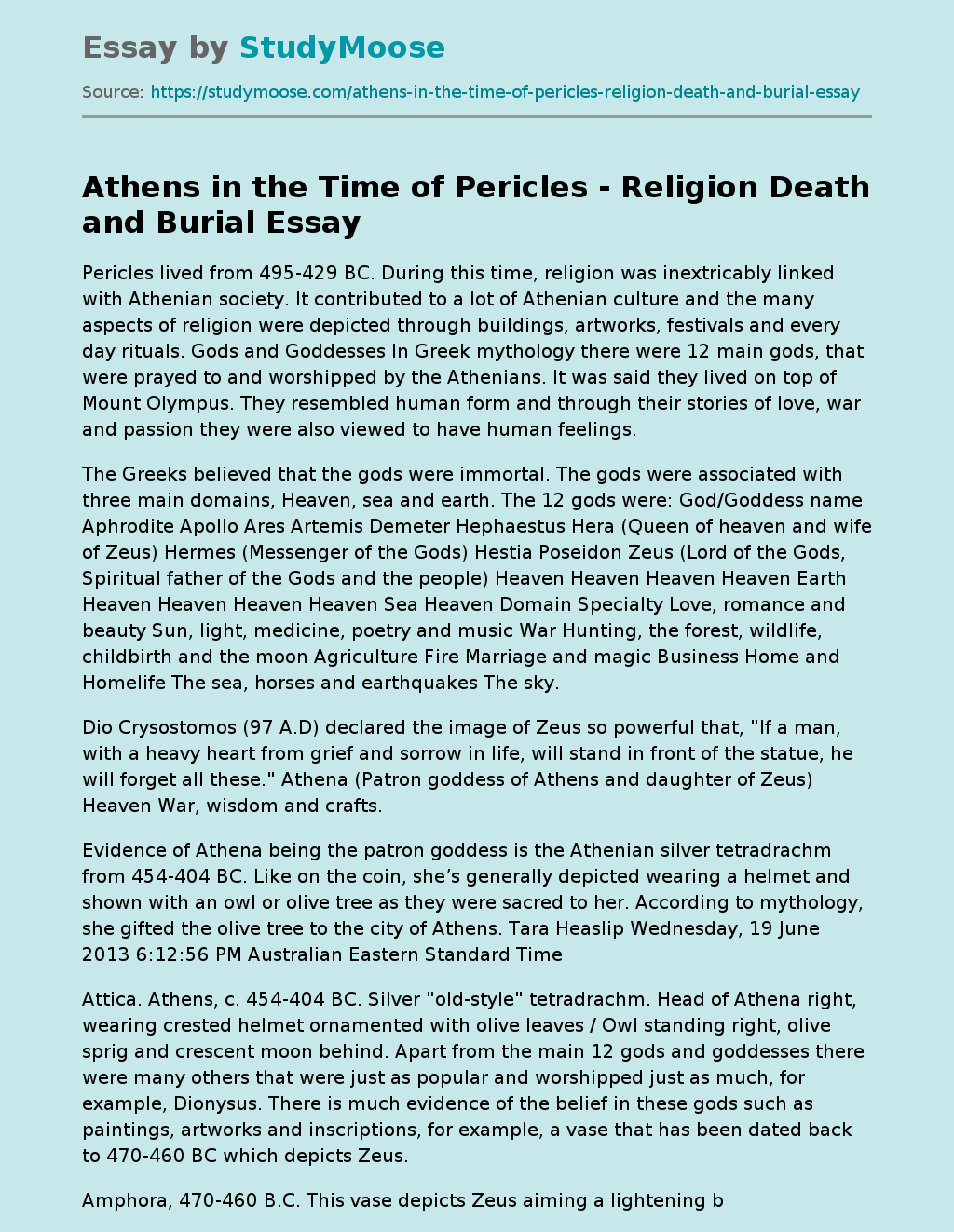