Deregulation of the airlines in 1978 forced the industry to rethink their business strategy in order to be successful during a period of widespread operating losses due to an economic recession, striking air traffic controllers and brutal price wars. The poster child for innovation during this period was Astro Airlines founded in 1980 by its charismatic leader, Arthur Burton. Enthusiasm, excitement and optimism were watch words used to describe the atmosphere at Astro Airlines in the initial years. This case analysis will discuss; Burton’s leadership behavior;

Don't use plagiarized sources.
Get Your Custom Essay on Astro Airlines Just from $13,9/Page

Central to this this case analysis is Astro’s inability to sustain itself long term under a charismatic leader after a very successful start-up period. Organizational effectiveness is the long term prosperity and survival of the organization. It was ultimately the lack of organizational effectiveness of Burton that led to the demise of the company. Earlier success and adulation by many subordinates may cause the leader to become over confident about his or her judgement.

In a persistent quest to attain the vision, a charismatic leader may ignore or reject early signs that it is unrealistic. The charismatic vision, influencing and communication ability of Burton started the airlines discussed in Parts 1 & 2, with reduced fare, innovative ticketing style, low cost service to all who could not afford high price. Both enjoyed immediate successes where innovative strategy and the vision of leadership were hallmarks.

They performed well under mounting industry pressures. Astro adapted to its early growth and survived. The airlines in Burton’s charge could not, however, transition from start-up to organizational effectiveness due in large part to Burton’s inability to recognize that operating problems and declining customer service were alienating customers and eroding the company’s reputation and ultimately, its profitability. Burton was unable to effectively transition from a charismatic leadership style to that of a transformational and transactional leader which is what the organization needed after start-up. Finally, we can see where overconfidence, risky decision making, failure to develop successors created an eventual leadership crisis and led the company to ultimately file for bankruptcy protection.

My read of question one, part one is that Burton’s leadership behavior was most certainly that of a charismatic leader. He was a visionary, could effectively articulate his visions and exuded a confidence and optimism that inspired and motivated his followers. He was willing to take personal risks and make self-sacrifices to attain the vision, at least initially. He used strong expressive forms of communication when articulating the vision. With respect to his followers, he communicated high expectations, expressed optimism and confidence in them and empowered them. Evidence of charismatic leadership is provided by the leader-follower relationship, and a charismatic leader has profound and unusual effects on followers.

This was certainly the case initially where the organization provided, “a better way for people to work together, thereby unleashing their creativity and improving productivity.” Question two of part one asks, “Was Burton a charismatic leader in the company at this time? Explain your answer.” The short answer is yes. However, in order to answer this question more completely we must first understand that, “Attributions of charisma are the result of an interactive process between leader, followers and the situation.” Max Weber was one of the first theorists to recognize that leadership itself was situational in nature, and that effective individuals needed to move dynamically from one type of leadership style to another to remain successful. If you define Burton’s leadership style by the Attribution Theory of Charismatic Leadership (Conger & Kanugo 1987)and its associated behaviors of Novel and Appealing Vision, Emotional Appeals to Values, Unconventional Behavior, Self-Sacrifices and Confidence and Optimism it’s clear that to some extent each of these can be applied to Burton.

The Self Concept Theory of Charismatic Leadership developed by House in 1977 “proposed a theory to explain charismatic leadership as a set of testable propositions involving observable processes rather than folklore and mystique.”. In order to incorporate more aspects of human motivation and a more detailed description of the underlying influences processes, Shamir et al. revised and extended the theory in 1993. Central to the SCT is the notion that leader’s beliefs are correct, followers willingly obey the leader, followers feel affection toward the leader, they’re emotionally involved in the mission of the group or organization, they have high performance goals and they believe they can contribute to the success of the mission. Shamir et al’s theory differs from Kanugo in that while it recognizes attribution, SCT does not consider attribution as a necessary condition for charismatic leadership. Finally, in Part II we see where Burton’s inability to adjust his leadership style based on the demand signals of the situation lead to the ultimate demise of the organization. Routinization of charisma was a contributing factor to the dysfunctional aspects of charismatic leadership displayed by Burton during his tenure.

Burton ultimately became a negative charismatic leader by displaying the following key attributes: He was unwilling to take steps to transform Astro from start-up to viable concern; Rather than concentrate on consolidation and remedying the extant problems, he set off on a new path of growth; He lost his legitimacy and was perceived by his employees as a manipulator; As founder and largest shareholder he rejected the notion of independent outsiders on the board of directors; He terminated at will a key managing officer for asking questions that Burton didn’t feel he should have to answer. Burton failed to recognize the resources required by his employees in order for them to be effective in their roles. He likewise failed to recognize that due to the changing operational dynamics from start-up to day-to-day operations, he needed to identify the requisite positions, skill sets and training for managers. He needed to develop a balance of new hires and internal promotes for continuity of operations.

The environment was not only dysfunctional, but Burton transitioned to a negative charismatic with a “personalized power orientation.” In conclusion, the Astro Airlines case study clearly indicates the pros and cons of charismatic leadership. It likewise further supports Weber’s notion that successful leadership is situational leadership. My personal experience supports the fact that in business an entrepreneurial founder should step back from day-to-day operations ata predetermined point and invest in a visionary successor with a strong operational background with mutually aligned goals and objectives. Finally, it’s clear that while a charismatic leader is good for crisis situations, a transformational leader is needed to sustain operations.

Astro Airlines. (2016, May 19). Retrieved from https://studymoose.com/astro-airlines-essay 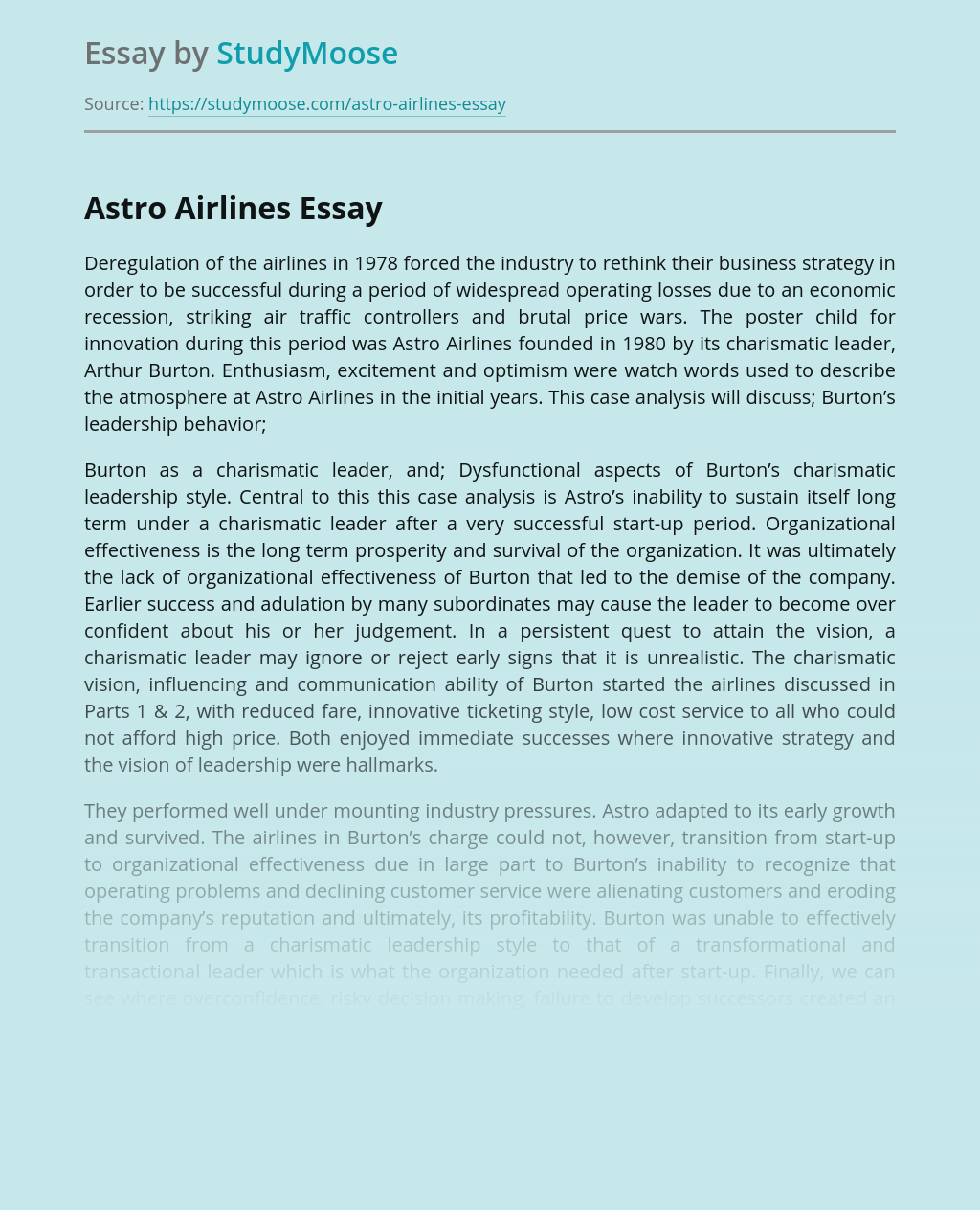 1.Does the organizational design of this corporation help or hinder it in achieving its organizational goals? Continental Airlines utilizes a divisional structure relative to the management of its various entities. This structural design is due to the complex nature of the aviation industry as well as the autonomy required in operating a twenty-four hour a...

Ryanair is considered as the pioneer of the low-cost business model, while British Airways is constantly ranked amongst the world’s best legacy carriers. Both of these airlines are dominant companies in their segment with high passenger numbers and vast network coverage. Therefore the following question rises – how these airlines are different in terms of...

This report will study business policy and system of SIA and will cover 6 different scopes, namely the background details SIA, the examination of External and Internal Environments that is affecting SIA, Long term and Short-term Objectives of SIA need to think about, Strategic options SIA may select and implement and the justification First of...

Air France – KLM: Changing the Rules of the Game

Introduction Air France-KLM Case (Som 2009) provides the background for airlines industry and factors impacting companies’ positions, details about the history of air-carrier alliances and their challenges. The main focus of the Case is on two companies: Air France and KLM and their decision to merge despite predictions of failure. The period covered by the...

The Success of the Southwest Airlines Marketing Strategy

Southwest Airlines is the fourth largest major airline in the United States, flying more than 64 million passengers every year to 58 cities from the southwest and beyond. The company offers low fares to passengers, thereby achieving a huge market share in the airline industry. Although Southwest Airlines could be compared to Walmart in terms...