Assignment on the Contribution of Charles Babbage, Adam Smith and Robert Owen in the Field of Management

Contribution of Charles Babbage in the field of Management Charles Babbage (1792–1871) is known as the patron saint of operations research and management science. Babbage’s scientific inventions included a mechanical calculator (his “difference engine”), a versatile computer (his “analytical engine”), and a punch-card machine. Babbage’s most successful book, On the Economy of Machinery and Manufacturers, published in 1832, described the tools and machinery used in English factories.

It discussed the economic principles of manufacturing, and analyzed the operations; the skills used and suggested improved practices.

Don’t waste time
Get a verified writer to help you with Assignment on the Contribution of Charles Babbage, Adam Smith and Robert Owen in the Field of Management
Hire verified writer
$35.80 for a 2-page paper

He showed that reducing the tasks of manufacturing to their simplest activities increases the numbers of people who can do them and, thus, reduces the average wage which needs to be paid. According to him, a work should be divided into mental and physical efforts and a worker should be paid a bonus in proportion to his own efficiency and success of the business.

Babbage emphasized the importance of division of labor, indicating that greater profit could be made by specializing.

Babbage also emphasized the importance of balance in processes and the principle of optimum size of the manufacturing unit for each class of product. Contribution of Robert Owen in the field of Management Robert Owen (1771–1858) was a successful Scottish entrepreneur and a utopian socialist who sowed the first seeds of concern for the workers. He was repulsed by the working conditions and poor treatment of the workers in the factories across Scotland.

Owen became a reformer. At New Larnark, in his factory he was trying to make different approaches to the workers.

He reduced the use of child labor and used moral persuasion rather than corporal punishment in his factories. He chided his fellow factory owners for treating their equipment better than they treated their workers. In 1813 he proposed a factory bill to prohibit employment of children under the age of ten and to limit hours for all children to 103/4 hours per day with no night work.

The bill became law six years later, but was limited to cotton mills, reduced the age limit to nine, and included no provision for inspections; therefore, the law had little impact. Owen was totally devoted to management as a profession. Under his direction, houses and streets were built, the minimum working age for children was raised, working hours were decreased, meal facilities were provided, schooling were introduced, and evening recreation centers were opened to meet the problem of leisure. He is the father of modern Personnel Management.

Contribution of Adam Smith in the field of Management Adam Smith (1723–1790) was a Scottish political economist. His Wealth of Nations, published in 1776, established the “classical school” and with its publication, he became the father of “liberal economics. ” Smith argued that market and competition should be the regulators of economic activity and that tariff policies were destructive. The specialization of labor was the mainstay of Smith’s market system. According to Smith, division of labor provided managers with the greatest opportunity for increased productivity.

He gives three reasons for the increased output due to the division of labor: a) to the increased dexterity in every particular workman b) to the saving of time which is commonly lost in passing from one species of work to another c) to the invention of a great number of machines which facilitate and abridge labor, and enable one man to do the work of many. His idea about the division of labor is fundamental to modern work simplification and time study, and extends also into such areas as production simplification.

Assignment on the Contribution of Charles Babbage, Adam Smith and Robert Owen in the Field of Management. (2016, Nov 13). Retrieved from http://studymoose.com/assignment-on-the-contribution-of-charles-babbage-adam-smith-and-robert-owen-in-the-field-of-management-essay 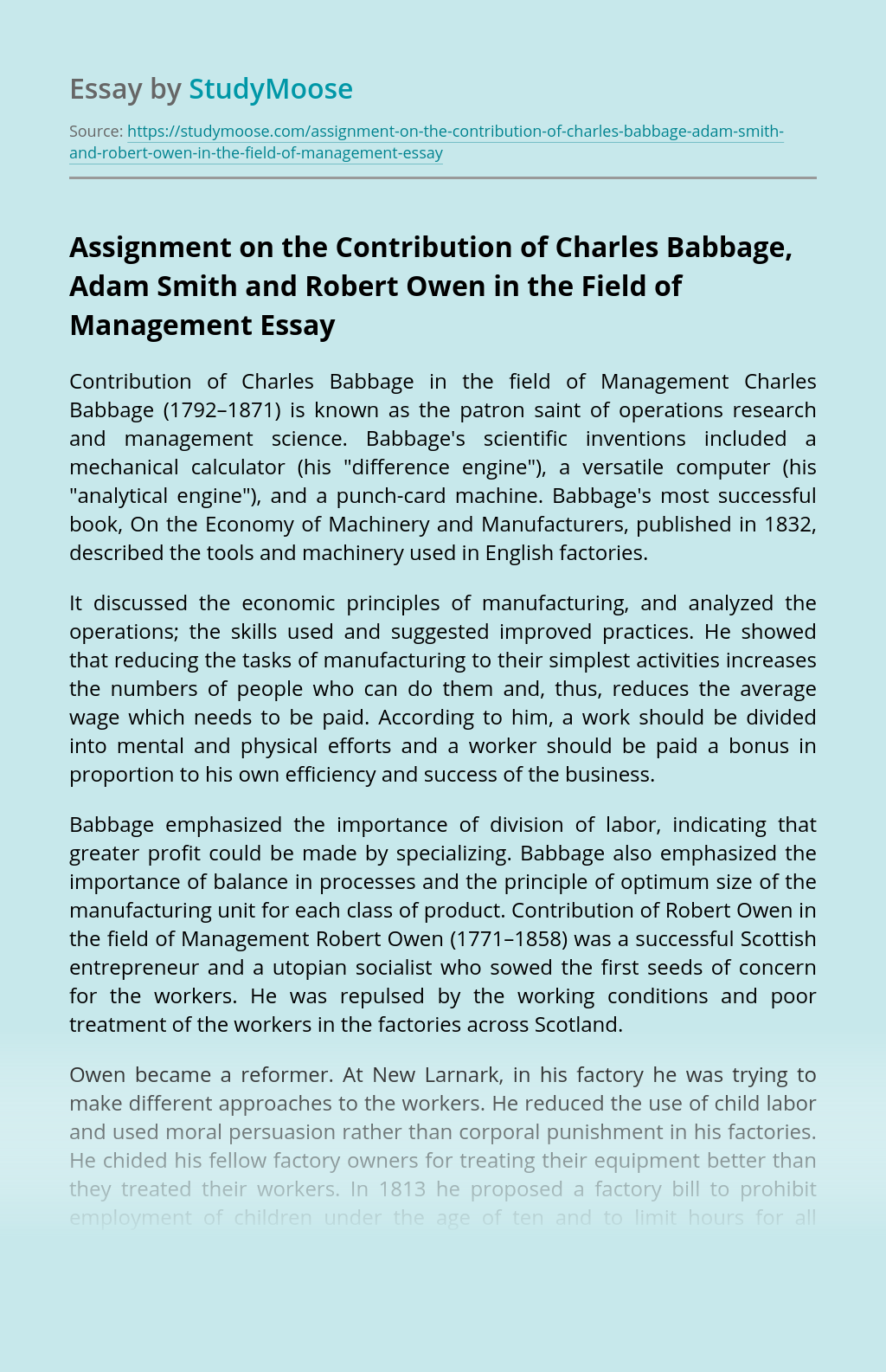 Don’t waste time
Get a verified writer to help you with Assignment on the Contribution of Charles Babbage, Adam Smith and Robert Owen in the Field of Management
Hire verified writer
$35.80 for a 2-page paper
Stay Safe, Stay Original