I chose “A Beautiful Mind” movie which was produced 18 years ago. The main character is John Nash, represented by Russell Crowe and Jennifer Connelly is played as his wife, Alicia. Ron Howard, Director, provided an interesting and fascinating story referring to a man fight to keep lucidity as his enormous capacities of imagination lead him inspiration, misapprehension, faithful love, and difficulty. This movie is a true story of John Nash’s horrendous life. John Nash had a very captivating characteristic.

The movie focuses on his mental issues throughout his life. Nash was as a brilliant mathematician who suffered from schizophrenia, which is a mental diseases. His remarkable job as a professor was influenced by his fight with schizophrenia, almost demolished his family and himself.

When his wife, Alicia was pregnant with their child, the first sign of his illness become noticeable. This movie notifies the story of a person whose mind was served to humankind while his mental disorder was revealed.

Crowe shows a man who comes down into mental issues and then, suddenly, begins to recover the capability to function through the future. At the beginning of his illness, Nash often imagined Charles Herman, is played by Paul Bettany as his roommate. Although John Nash was intelligent and genius but he had difficulty to interact with people. Later on, he finally could find Alicia to communicate and be attached to her.

I chose Alicia one of the characters in this movie, who I would consider from my perspective, a competent communicator.

Nash is a conceited, tricky mathematics student, who used up mostly making attempts to find a solstitial equation in mathematics. A Beautiful Mind provides the essence of communication competence. Alicia is a physicist student who falls in love with her genius professor, John Nash. He could regain his mental power and his position as the famous mathematician by Alicia’s assist. Alicia’s capability and enthusiasm to realize John Nash confidently is the key to their relational success.

For example, John’s marriage proposal to Alicia has found anything but romantic. He appears at their meeting at dinner so late, gets her a stone instead of a ring, and muttered about his belief in short-term commitments. Alicia is aggrieved at first, but then she told him that she needs a minute to redefine her youthful beliefs of romance. Once she reexpress the circumstance, she fixes for his incompetence with her own competence, and finally accepted to marry him. In this example indicates Alicia was a competent communicator. In my perception, in the movie this character is also a competent communicator in many other roles.

Although Nash was very intelligent and brilliant but he was isolated. He hesitated talking with people in his workplace, alternatively he was involved in resolving equations. In the movie, Nash confessed that he did not attach to anyone and also people did not admire him. Nash was also dispirit when he perceived about one of his students who publishing his thesis without stating the topic of the Phd related to him. However, even at first, John Nash was frightened of being social, but he finally could communicate and find only two friends, Alicia and imaginary friend, Charles Herman. In some roles of John Nash in the movie, he got antagonist because he was in need of to be outstanding on something was not succeeded in his class. John Nash acted regarding his interpretation of objects because he noticed Russian spies were chasing him, he escaped them and began to be paranoid.

Maslow’s hierarchy of needs can be related to the main character, John Nash in “A Beautiful Mind” movie. Regarding Maslow’s theory, there are specific needs that people are persuaded to succeed. The fundamental needs of everyone is physiological needs consist of food, water and accommodation. People make efforts to meet these needs, but John Nash did not require none of the physiological needs. Thus, he needed to pass this level and move to the second level which is safety needs. As demonstrated in the film, John Nash had a job in the government by decoding codes in the Pentagon. After meeting with Alicia and deciding to marry her, so he intent to leave his job. He was suffering from thinking a Russian spy is spying on him. Nash was frightened for his safety because he was imagining those spies were chasing him, that is why he wanted to leave his job. Russian doctor locked Nash in the hospital’s room to prevent him from his fear of hurting by a spy. He had paranoia and this has been caused his fear.

Fundamentally, he desired to attain the second level of needs and this need could confirm his mental disorder. When his pregnant wife was in hospital, he locked by doctor again because of his fear about chasing him. His conduct indicated his need for his family’s safety not just for himself. After he was recognized of paranoid disorder, his doctor noticed that Charles was his unreal roommate. The doctor found out that Nash was alone in his place and nobody lived with him. The reason that Nash in his mind had an unreal roommate was love or belonging needs. In the beginning of the movie, it represented that Nash liked being isolated and alone. Nash many times was hidden in his room,in order to doing Mathematical equations with unreal friend. This indicated that Nash needed someone to communicate. By imaginary of Charles Herman as a roommate, Nash could please the belonging need. After Nash began working in the University, Charles was gone in his life and was present again. Nash had attached to Charles because of love and belonging needs and when he got married to Alicia in spite of his mental issues. Because of his mental disorder, he felt that it challenging to succeed the esteem level in the hierarchy. Luckily, he excelled all the mental difficulties because of his endurance. Eventually, he presented his thesis and was granted the Nobel Prize. This succeed award him self-esteem and fulfilling all the four levels needs of Maslow’s hierarchy. Also,he succeeded self-actualization, even though a long term.

As a consequence, “A Beautiful Mind” in which we follow our hearts and our urge. This story has the courage to put forward that the track the fulfillment and restfulness needs that we refuse of self-devastating urges. At its heart, “A Beautiful Mind” is a moral story about self-restraint, and developing throughout the changing of our minds.

At the end of this story, John Nash was capable to achieve in his life, in spite of meeting the mental disorder for the main part of his life. He had a long term job as a professor at Princeton, and He won a Nobel Prize even won a Nobel Prize. Also, his marriage persist throughout the fight. This movie informs aspiration to people with mental issues like schizophrenia that is able to get control of the struggling in order to succeed in their aims.

I would say one disagreement example that relates to Nash’s life, but it will affect an interpersonal relationship. When he was involved in his mental disorder, he intended to interact with people, but his imaginary did not agree with that. The issue was his paranoid illness to be isolated and alone and escaped from people. It had the disagreement has been going on long term in his life until he found his partner Alicia.

When he intended to interact with people and have a friendship, his mind was pushing him and avoiding him to escape from people because he had a paranoid disease. Also, his illness made him imagine a roommate, especially when he was alone. However, he was unsociable because of the feeling of not liking anyone. He needed to be socially and find a real friend, the best way in order to achieve his goals.

The mental issues that he had, all the time made him to think about someone is following him. This mental issue is one of the most influences on the mind and get involved. The most trouble this paranoid disorder is making imaginary thoughts. John Nash got imaginary of Charles, his unreal roomate.

It was understandable and correct when this illness attached his mind and made him run away from people. Paranoid disorder got him involved the imaginary journey. However, this disorder was shown it can force him to run away from people. He was correct that he needed to be socially to achieve his goals at his job in University. However, it was mistaken in thinking about achieving his goals right away.

This issue and disagreement between them have passed, It didn’t sound like a related anymore. At that time, when he discussed the issue into a solution, but after when he looked back on this situation, it sounded like the best solution. He could achieve in his life by coping with the disorder.

Viewing the issue from each of the preceding positions has changed his perception of the issue. This view was made him calm and made it much easier for him and mental disorder have a better communication. In later years, he would be more socially. As a result of changing his perception of the issue, he was optimistic and determined to achieve his goals in the future. Also, his understanding of the issue could make it easier, it affected his relationship to act as the same before being at peace and happiness. 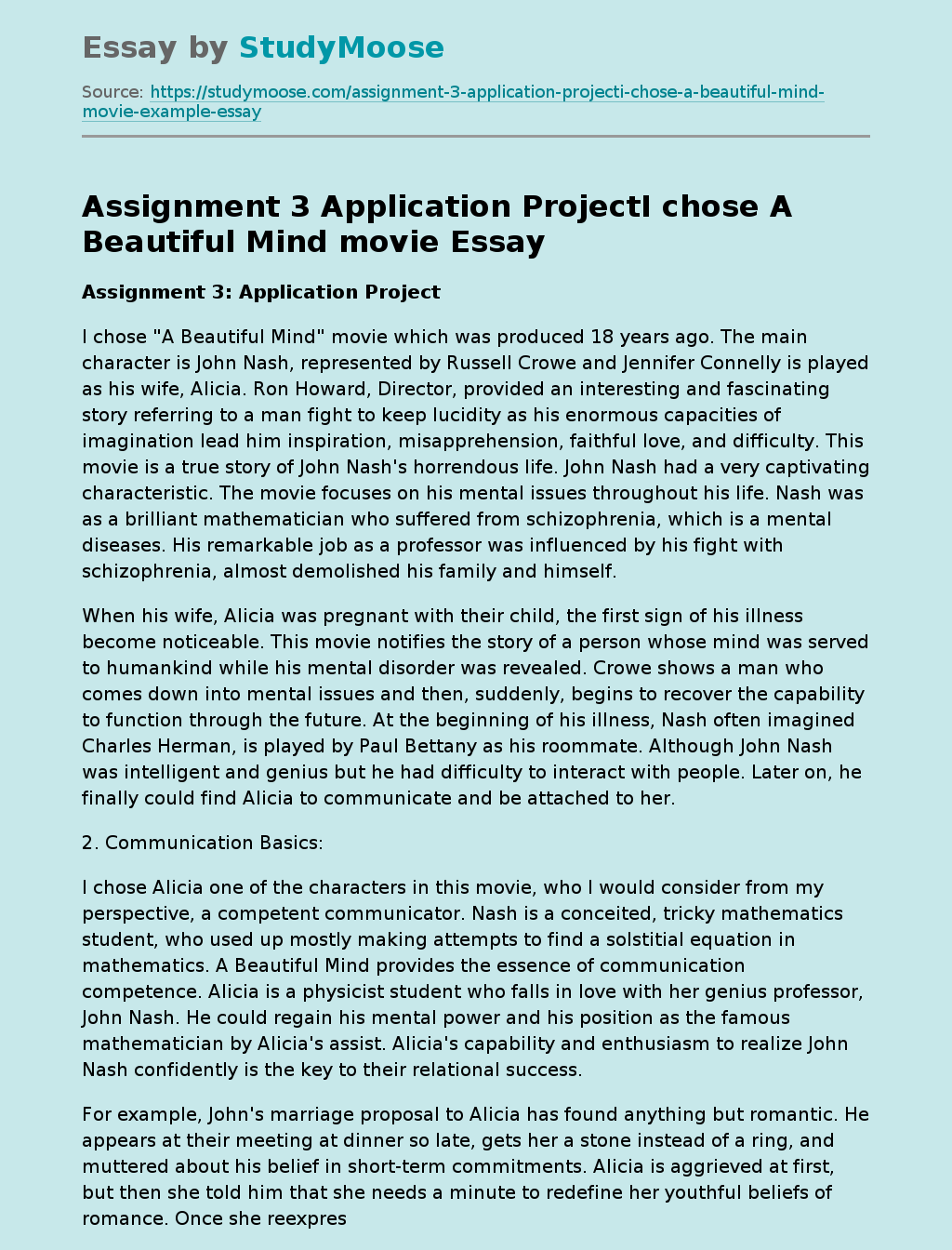