Asset of a ‘Home-Grown’ Football Player

Give an example of an asset that is not recorded on a balance sheet, and critically evaluate why it is not, before developing an argument for the inclusion of the asset. Whether or not certain assets and liabilities should be placed on a balance sheet is a much talked about subject. The accounting equation, Assets – Liabilities = Ownership Interest, represents the balance sheet; which is produced each year in a Public Limited Company’s financial statement; which can be viewed by the public.

Don't use plagiarized sources. Get your custom essay on
“ Asset of a ‘Home-Grown’ Football Player ”
Get custom paper
NEW! smart matching with writer

I will use this essay to discuss why the asset of a ‘home-grown’ football player, a player who signs as a trainee with a professional club under the age of 16, is not included in the balance sheet of the company. According to Thompson, P (2003) new rules, which started in the year 2000, require clubs to show transfer fees on their balance sheets as intangible assets. ‘Intangible assets don’t have any physical features, rather they represent legal rights and relationships beneficial to their owner’ (Glautier and Underdown 2001, p.

66). Of course, no transfer fee has been paid for a trainee. The performance of such a player who has come through the youth system at a football club must be seen to be beneficial to the owner; but the balance sheet still doesn’t record such an asset. Assets are defined as ‘rights or other access to future economic benefits controlled by an entity as a result of past transactions or events’ (Weetman 1999, p. 28).

The company can use the employee, even if they are not controlled by a contract.

The future economic benefits from the player would be producing goods or services (the performance level assisting the winning of prize money, for example) while being controlled by the entity in the form of payment through a contract. This is all a result of a past transaction or event where the entity has got control of the employee. Yet, there is a high level of doubt involved with the asset.

Using the Accounting Standards Board’s Statement of Principles for Financial Reporting it declares that assets should be recognised if there is ‘sufficient evidence exists that the new asset or liability has been created or that there has been an addition to an existing asset or liability;’ (ASB, 1999). So to comply with this, the employee would obviously need to exist and the goods and services they produce would need to be shown. In this case the player exists and the service he provides can be shown on a football pitch, for example.

The other recognition test is ‘the new asset or the addition to the existing asset can be measured at a monetary amount with sufficient reliability’ (ASB, 1999). This is where the home-grown player isn’t recognised due to the inability to reliably measure him in a monetary way. It is very difficult to determine how a monetary amount can be produced to represent the performance of an employee in any one industry; let alone create a way of calculating it to cover all bases, which the accounting industry no doubt have tried.

Different companies want different skills and attributes from their employees; so a way of calculating a value is tremendously difficult. Therefore, the footballer cannot be measured reliably (monetarily) and so cannot be put on a balance sheet. However, this would mean that a player such as David Beckham; who ‘signed as a trainee in 1991’ (University of Leeds, 2002) at Manchester United Football Club would not be present on the balance sheet, and would not be seen as an asset.

He was developed by the football club to produce such a service, therefore he is ‘an internally generated intangible asset’ (Thompson, 2003). It would be mad to reject him from the balance sheet as some might say he is one of the greatest footballers of all time. This topic has been thoroughly assessed to try and include such an asset on a balance sheet of a football club. A University of Leeds lecturer, Dr.

Gerrard carried out some academic research into the topic and created a formula which ‘takes into account players’ ages, experience, international recognition, goal-scoring ability and the size and status of the club’ (University of Leeds, 2002) to try and enable the players’ skill to be seen on a balance sheet. This is also very important to a club, as they want to show all of their assets to potential investors; in a time where more and more clubs are falling into administration.

In my opinion, the players of a football club are its biggest asset. The consumers of the service provided by the entity are the fans; and I am sure the majority would tell you the names they sing on the terraces are the biggest asset of the club. Again, take David Beckham as an example. In 1999 he was part of a team who won three major competitions including the UEFA Champions League, playing in 31 games and scoring six goals (National Football teams,2004); yet he is not included on the balance heet. Looking at the financial statements of Arsenal Holdings Plc it shows no football player as an asset in the balance sheet. It seems foolish not to include an individual as it is a way to show off the competent employees the entity has, to potential investors. The transfer fees paid for a player are recorded; but in no way are home-grown players verified in such a way. The future economic benefit of the company is, therefore, not shown and the entity not measured to illustrate its full value.

Along with many human resources, ‘home-grown’ players are a valuable asset to an entity, the football club. Unfortunately they are not able to appear on the balance sheet because of the difficulty in measuring a human’s actual value. Until there is a standardised method which covers all industries and markets, this will remain the case. For the example explained, it is not possible, at present, to determine how much a footballer is worth shown as a monetary value; the football club must demonstrate the players’ worth in a different way.

Asset of a ‘Home-Grown’ Football Player. (2020, Jun 02). Retrieved from http://studymoose.com/asset-of-a-home-grown-football-player-essay 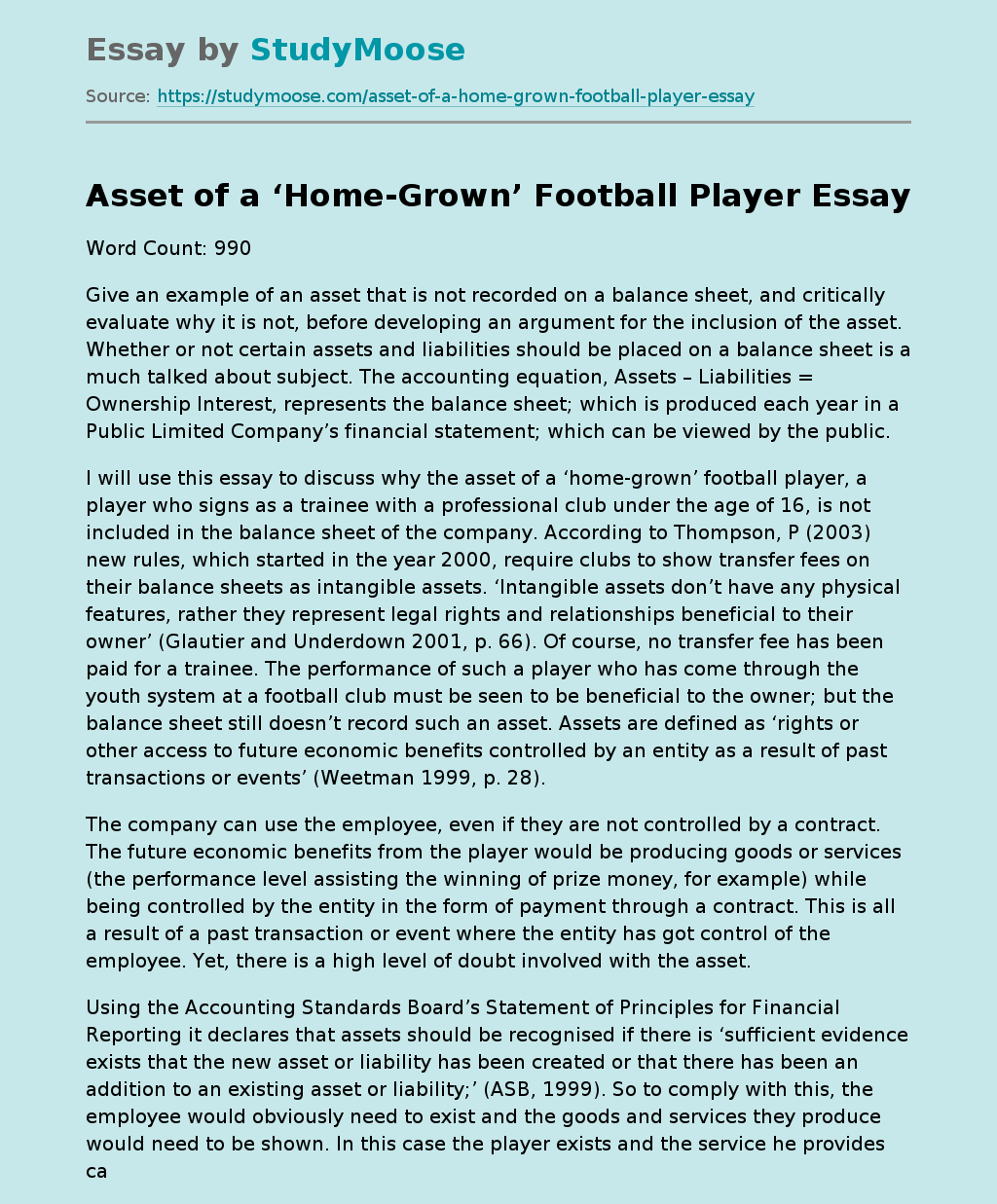