1. The first document was from Harry Truman.

2. This document informed the American people of the destruction of the Japanese city. Truman seeks to justify his decision, and also outlines the process to which American gained the intelligence for the bomb.

Don't use plagiarized sources. Get your custom essay on
“ Assessing the reasons for the US using the atomic bomb in WW2 ”
Get custom paper
NEW! smart matching with writer

6. Truman’s goal was to “destroy Japan’s power to make war.” Truman did accomplish this with the atomic bombs he dropped, because Japan soon surrendered after massive losses crippled their power to fight on.

7. Truman advocates the power of using atomic energy to maintain world peace, but does not divulge how. He simply states, “it is not intended to divulge the technical processes of production.

” He only says he will make recommendations to Congress about how to maintain peace and will continue to form committees and do research.

8. Truman claims that Japan was given an opportunity to surrender at Potsdam, and that diplomatic attempt was the olive branch that they refused, giving America a right to attack. Also, he claims that Japan continued to fight on, and he needed to attack to save American lives and time and resources.

The five reasons Truman dropped the bomb were assessed as follows:

1. it would end the war successfully at the earliest possible moment

2. it justified the effort and expense of building the atomic bombs

3. it offered hope of achieving diplomatic gains in the growing rivalry with the Soviet Union

4. there were a lack of incentives not to use the weapons

5. because of America’s hatred of the Japanese and a desire for vengeance

1. For the first reason, I believe he is justified in that claim. The war had been dragging on for quite awhile, and American troops needed to be sent home and resources needed to be saved.

2. I absolutely do not agree with this justification. Hundreds of thousands of Japanese civilians died because of the two atomic bombs. How dare he say that it was to justify the expense of an atomic bomb? Money should never be compared with valuable human lives.

3. I can sympathize with Truman for his justification of being scared of the Soviet Union. They were a rising power, and I understand why he would want to get the Japanese out of the way to focus on the Soviet Union.

4. Similar to his justification for number 2, I do not believe the well being of his presidency or his approval ratings from the American people should have played a part in his rational process. These are people, and he must consider the repercussions.

5. I do not agree with this justification, but I can definitely relate to it. Many American people must have clamored for revenge for Japanese killings of American soldiers, and after all, the POTUS is the voice of the people.

What are the moral implications of the atomic bomb?

Harry Truman understood when he dropped the atomic bomb, he would be open to severe criticism for his immoral behavior of killing thousands of innocent Japanese civilians. The first use of the atomic bomb led not only questions about Truman’s morals, but also the morals of the American people as a whole. The atomic bomb caused questions to be asked about getting rid of the Japanese to focus on the Soviet Union and killing them off like dogs. The mass killings that the first atomic bomb created, led to a race to the use of chemical weapons and an instrument to kill an entire city. Using an atomic bomb eliminates the use of hand to hand combat, a more humane and fair way of fighting. Instead, the atomic bomb allows a rich and more powerful country to kill off an entire country with a press of a button.

Essay on Morality • Essay about Revenge

Assessing the reasons for the US using the atomic bomb in WW2. (2020, Jun 01). Retrieved from https://studymoose.com/assessing-reasons-us-using-atomic-bomb-ww2-new-essay 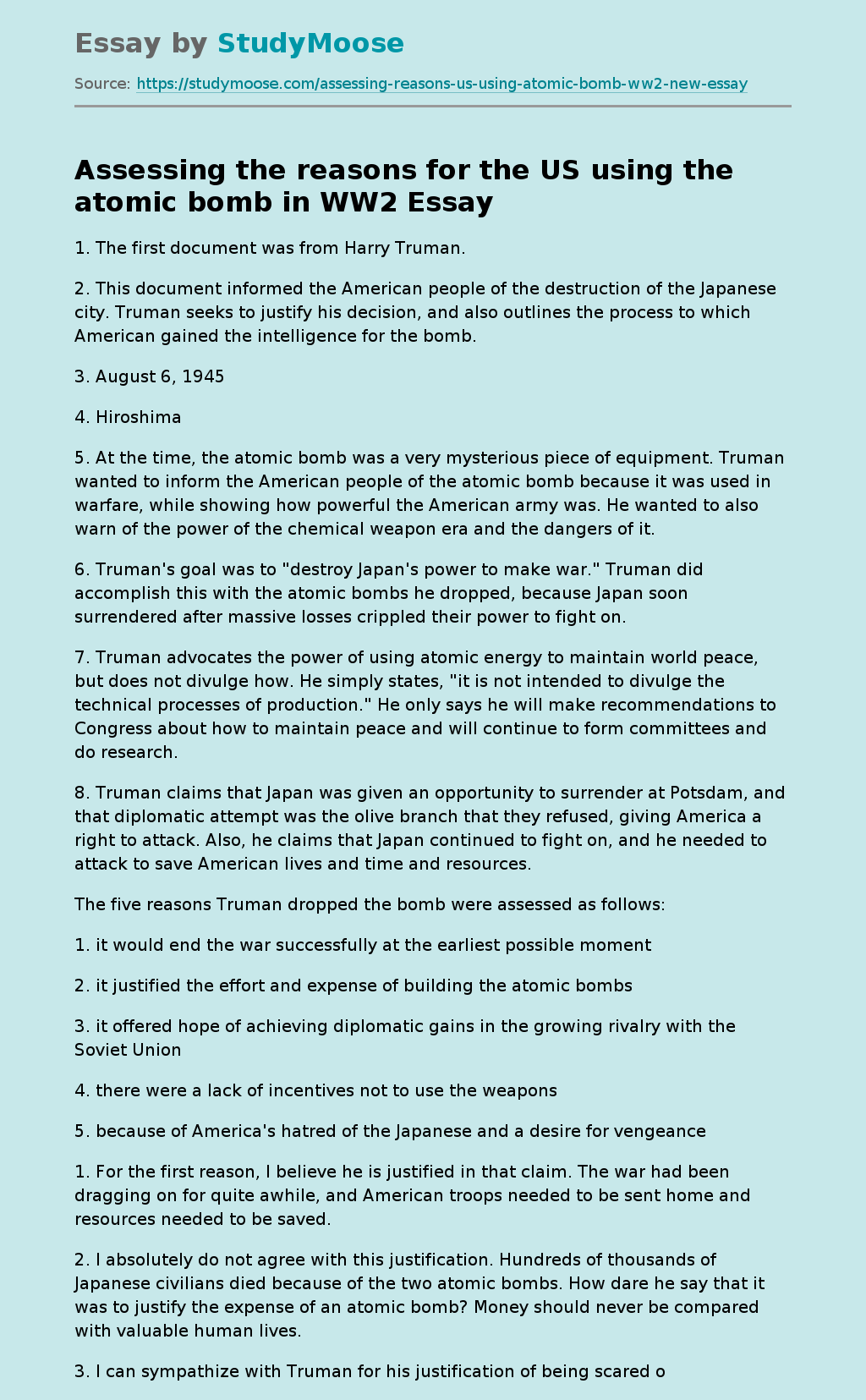