It can be argued that cults and sects are only fringe organisations that are inevitably short lived and of little influence in contemporary society, however some may have views to contrast this idea. A sect is an organization, which usually breaks off from an established religion, which finds itself in disagreement with beliefs and values of wider society and refuses to tolerate the beliefs of others. Although the desire to be a member is voluntary, as oppose to being born into, like religion, sects are rejected by society and claim strong obligation and commitment by its members.

Don't use plagiarized sources. Get your custom essay on
“ Assess the View That Cults and Sects Are Only Fringe Organisations That Are Inevitably Short Lived and of Little Influence in Contemporary Society ”
Get custom paper
NEW! smart matching with writer

A sect is an extremely narrow-minded organisation, which is often led by a charismatic leader. Whereas, in contrast, a cult does not progress from a mainstream religion and does not reject or challenge societal norms. However, as tolerant of other beliefs as they are, they still attract a great deal of negative press, for example brainwashing. Members in a cult are usually more like customers than followers.

An example of a cult is Heavens gate, which is a destructive doomsday cult, centered in California.

There is a mass of supporting evidence that cults and sects are short lived and insignificant to wider society. Nevertheless, it must be maintained that the matter is complex as there are many sects and cults, which identify themselves differently.

There is evidence to support this view of a short-lived nature of sects. This is due to many reasons. World rejecting sects, due to their nature and succeeding societal rejection and stigma of bad press, must be able to compromise with society and becoming a denomination and therefore cease to be a sect, if this is not done then the sect will die out.

There is also an argument that sects cannot have a great deal of affect upon society over a long term period as they cannot survive past the charismatic leader’s lifetime and therefore sustain themselves over more than one generation.

The American theologian Niebuhr theorises that another reason for transience of sects is that they rarely live past the 1st generation because the 2nd generation usually lacks the belief of the 1st. In this way, their
membership dwindles as the 2nd generation chooses to leave the sect and hold other views in wider society.

However Wilson disagrees with Neibuhrs view and says that he overates his case and chooses to not pay attention to groups who did preserve a ‘ distinct sectarian stance’. Similarly, evidence proves to discredit the belief that a sect fails to live on past their leader’s death. For example, The Mormons have continued for many generations and also the Amish- however this could be attributed to the protective ‘isolation-like’ in which they live. There is also a possibility that the Moonies surviving is due to the leader preparing for his son to take over his position as the charismatic leader after his death, however this is yet to be seen.

Cults have seen a large incline in their number recently and because they are more accepting of wider society and despite receiving bad press, offer a practical solution to peoples’ issues and wishes, seem less likely to die out due to refusal and disapproval. They are also financially rather stable, the Church of Scientology for example has an estimated income of over £200m per year. This is down to the consumer attitude of cults. There is also a mass of evidence for their importance in society in a sense that audience cults have a mass market of ‘self help therapy’ there are many books available for example, tarot reading, crystals and reflexology regularly appear on the best seller list and often more room is devoted to these books rather than Christianity books themselves. The view that cults are fringe movements is less supported than that for sects.

Sects very infrequently continue on as sects but cults such as scientology are not only prosperous but also have a huge celebrity following trend; admired by the public for example Tom Cruise.

There is also evidence that sects and cults can be of great influence to society – though it is debatable as to whether or not that is possible today in a society as apparently secular as ours. Weber suggests in his Theodicy of Disprivilege that because they offer a solution to problems: justification and explanation for life and its problems, to marginalised
groups such as dropouts or ethnic minorities, world rejecting sects that offer status appeal to people. An example of this is Liberation Theology which was for the poorer people which had great influence upon the priorities of the Catholic Church in Latin America (though it has become more conservative, it continues to represent human rights and democracy).

Bruce argues that it is not a religion and is instead a shallow, meaningless thing. Due to the elements of choice it offers, the choice about which bits to believe and whether to take its readings into account, it does not require commitment. This he argues prevents it having religious status. Post Modernists see it as being spiritual shopping: it is part of a consumerist culture. Despite not necessarily being a religion, there is lots of evidence to show that it has influenced society as a whole and, some sociologists would claim, aided secularisation. There is also evidence to show that it is unlikely to be particularly short lived as it fits in so well with our Capitalist, consumerist society and our individualistic values and is so profitable.

In conclusion, the view that cults, sects are fringe organisations that are inevitably short-lived and of little influence in modern-day society, is on the whole not wholly correct but has some strength in that the permanency of all is arguable as is their status as fringe organisations.

Assess the View That Cults and Sects Are Only Fringe Organisations That Are Inevitably Short Lived and of Little Influence in Contemporary Society. (2016, Mar 30). Retrieved from https://studymoose.com/assess-the-view-that-cults-and-sects-are-only-fringe-organisations-that-are-inevitably-short-lived-and-of-little-influence-in-contemporary-society-essay 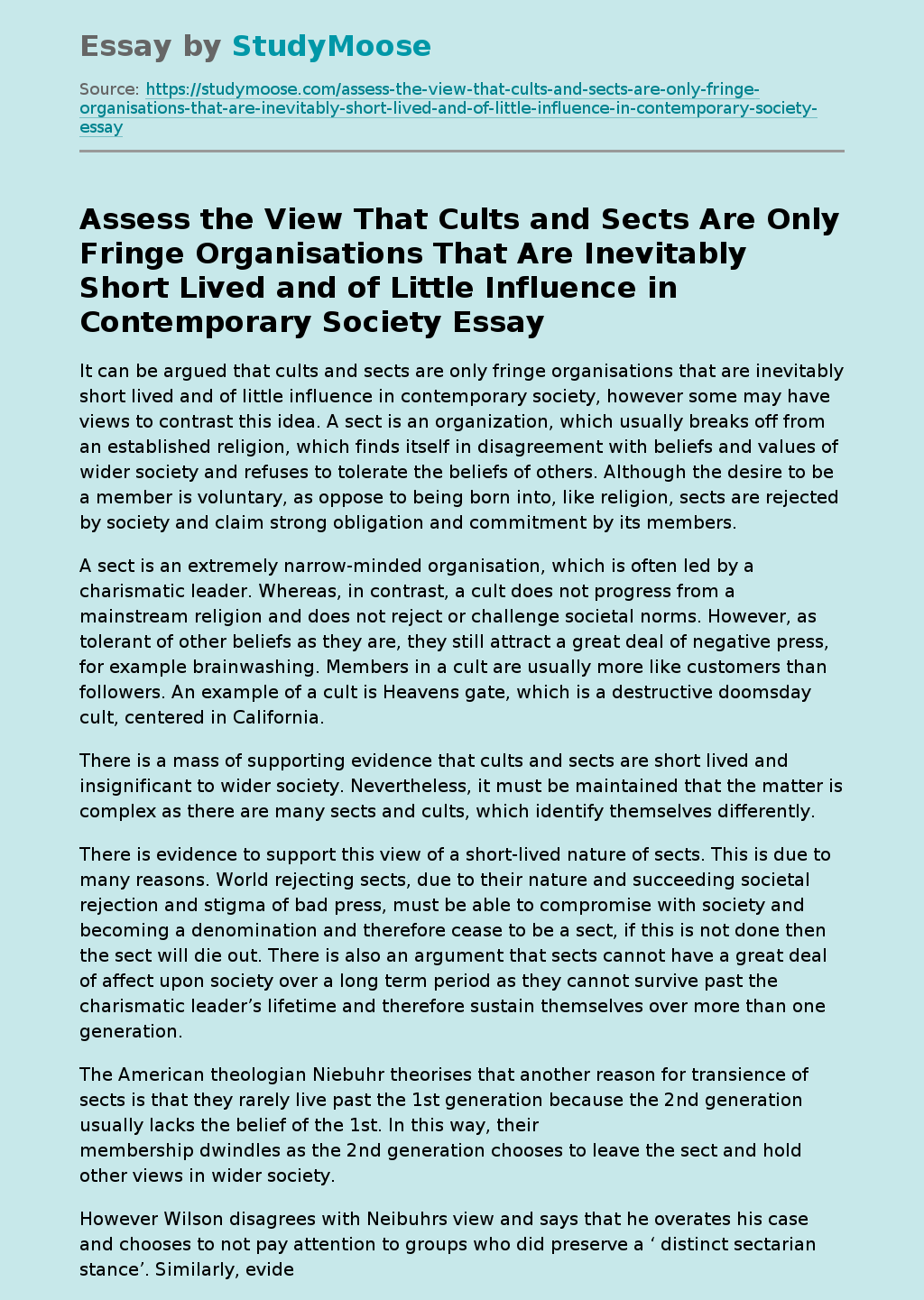