Assess the contribution of feminist sociologists to an understanding of family roles and relationships. In this essay I will explore the different schools of feminism such as Marxist, liberal and radical feminism, who share the view that women are oppressed in a patriarchal society but differ in opinion on who benefits from the inequalities. Each school of feminism has their own understanding of family roles and relationships which I will assess through this essay. Firstly one must look at the division of domestic labour and conjugal roles.

Don't use plagiarized sources. Get your custom essay on
“ Assess the contribution of feminist sociologists to an understanding of family roles and relationships ”
Get custom paper
NEW! smart matching with writer

Conjugal roles refer to the roles performed by men and women in relation to housework, childcare and paid work. Traditionally men had the instrumental ‘bread-winning’ role which the women had the expressive role (childcare and primary socialisation). Feminists say that the traditional division of labour is neither natural nor beneficial to women as their expressive role is unpaid and taken for granted. However different feminist views disagree on who benefits from this unpaid labour.

Marxist feminists would argue it is capitalism that benefits most as wives keep their husbands happy and therefore they are left with a content workforce. On the other hand, radical feminists would argue that men are the main people to gain from women’s oppression as we live in a patriarchal society. A functionalist view from Wilmott and Young says that there has been a ‘march of progress’ in which the family has become more symmetrical with more joint conjugal roles (where both partners share the household labour).

However feminists reject this view with Oakley arguing the family still remains patriarchal and Boulton saying the evidence to support the alleged rise in symmetry is weak, and that the responsibility for childcare still lies with women.

Furthermore, Oakley describes how the housewife role has become dominant for women in a marriage since the industrialisation in the 19th century. Although women started off as part of the work force they were gradually excluded and confined to the home with housework and childcare responsibilities. This shows how the role of the housewife was socially constructed rather than being ‘natural’ as claimed by Parsons, and how it benefits both men and capitalism. Additionally, even though the 20th century saw a rise in the number of married women in paid labour, they remain in lower paid jobs and unable to climb the job ladder due the the ‘glass ceiling’ (earning just 80% of a man’s wages in the same position). Silver and Schor stress the importance of two economic developments that reduce the burden of housework on women.

The commercialisation of housework means that goods and services previously produced by women themselves are now mass-produced and supplied by shops, including freezers, microwaves, ‘ready meals’ and so on, reducing the amount of domestic labour women have to do. Additionally, the increase in women working allows them the ability to afford these goods. Silver and Schor, as a result, argue the burden on housework has decreased. However critics argue that for poorer women it is not an option to buy these expensive goods and services. Feminists also argue that even if commercialisation has reduced the amount of housework needing to be done, it does not prove that couples share the remaining chores equally. A further argument from some sociologists is that rather than a ‘new man’ who has an equal share of housework now more women are working, women have simply acquired a dual burden of both paid and unpaid work. With this view feminists say that the family remains patriarchal, with men benefiting from both women’s earnings but also their domestic labour. Ferri and Smith provide evidence of women’s dual burden, finding that the father taking main responsibility for childcare occurred in less than 4% of families from their sample. In addition to the dual burden, Duncombe and Marsden argue the case of the ‘triple shift’ where women do the double shift of housework and paid work, but also take up emotion work (the management of one’s own and other’s emotions). As this essay has shown so far, there is inequality in who does what in the home but there is also inequality in decision-making; in deciding who gets what and how the family resources are shared out between them. Barrett and McIntosh note that mean usually make the most important decisions, the financial support from men is often unpredictable and they usually gain more from women’s domestic labour than they give back in return.

Feminist sociologists Pahl and Vogler suggest that because of men’s higher earnings women have more financial dependence on their husbands and this is why men take more control over major decisions. Edgell agrees with this view and states that women only exert some control on less important decisions such as home décor. Finch argues that wives’ lives are generally structured around the husbands’, such as if the husband had to move for work, the wives would pick up and go with them, whereas it is unlikely that the husband would follow their wife for work. Radical feminists also suggest that domestic violence is evidence of patriarchy as men use the threat or use of violence to control women. Domestic violence is a widespread problem being a sixth of all violent crime in 2007 and the cause of over 100 deaths per year. Domestic violence is mainly perpetrated by men against women with 1 in 4 women being assaulted by their partners at some point in their lives and only 1 in 7 men being assaulted. However these figures may be under representative as many victims are unwilling to report these events as police investigators are unwilling to record and investigate many claims. Some feminists also say that domestic violence occurs due the dominant models of masculinity in society leading some men to use violence to assert authority when they are challenged. However, Giddens explains it through the ‘emotional intensity’ of the family and Wilkinson says it is the product of stress created by social and economic inequalities (resulting in poverty, unemployment and poor housing). On the other hand these explanations do not explain why domestic violence also occurs in the middle and upper classes as well, despite the main victims being those in lower socio-economic groups. As shown in this essay, different feminist contributions to our understanding of the roles and relationships in the family have similarities.

However those perspectives examined differ in ‘solution’ to the oppression of women in our society. While liberal feminists believe that changes in the law and attitudes of people will be enough to bring equality, Marxist and radical feminists believes revolutionary changes to deep-rooted social structures are needed. Marxist feminists also argue that the family must be abolished at the same time as socialist revolution replaces capitalism with a classless society. Radical feminists also believe that the family, the root of women’s oppression, must be overturned; the difference being that they believe this can only be achieved through separatism – women must organise themselves to live independently of men. After reviewing all the feminist theories I can say that feminist perspectives of the family have moved research away from the traditional functionalist view of male-dominated society. Feminist perspectives have highlighted the negative aspects of the family which the functionalists have previously ignored, however all the different feminist views assume that the nuclear family is still the norm and ignores the increasing diversity of family life. Additionally, feminism is a structural theory meaning that they assume families and their members are merely puppets to be manipulated by society. Social action theorists and postmodernists reject this idea and argue that individuals have some choice in creating family relationship of our own and choosing our domestic set up for ourselves. In final conclusion, I believe the feminist perspectives to have helped move sociological ideas forward and take into account negative aspects of family life as well as the positives, yet at the same time they need to broaden their ideas to encompass the idea of individuals having choice to create their own family situation with diversity in families on the rise. 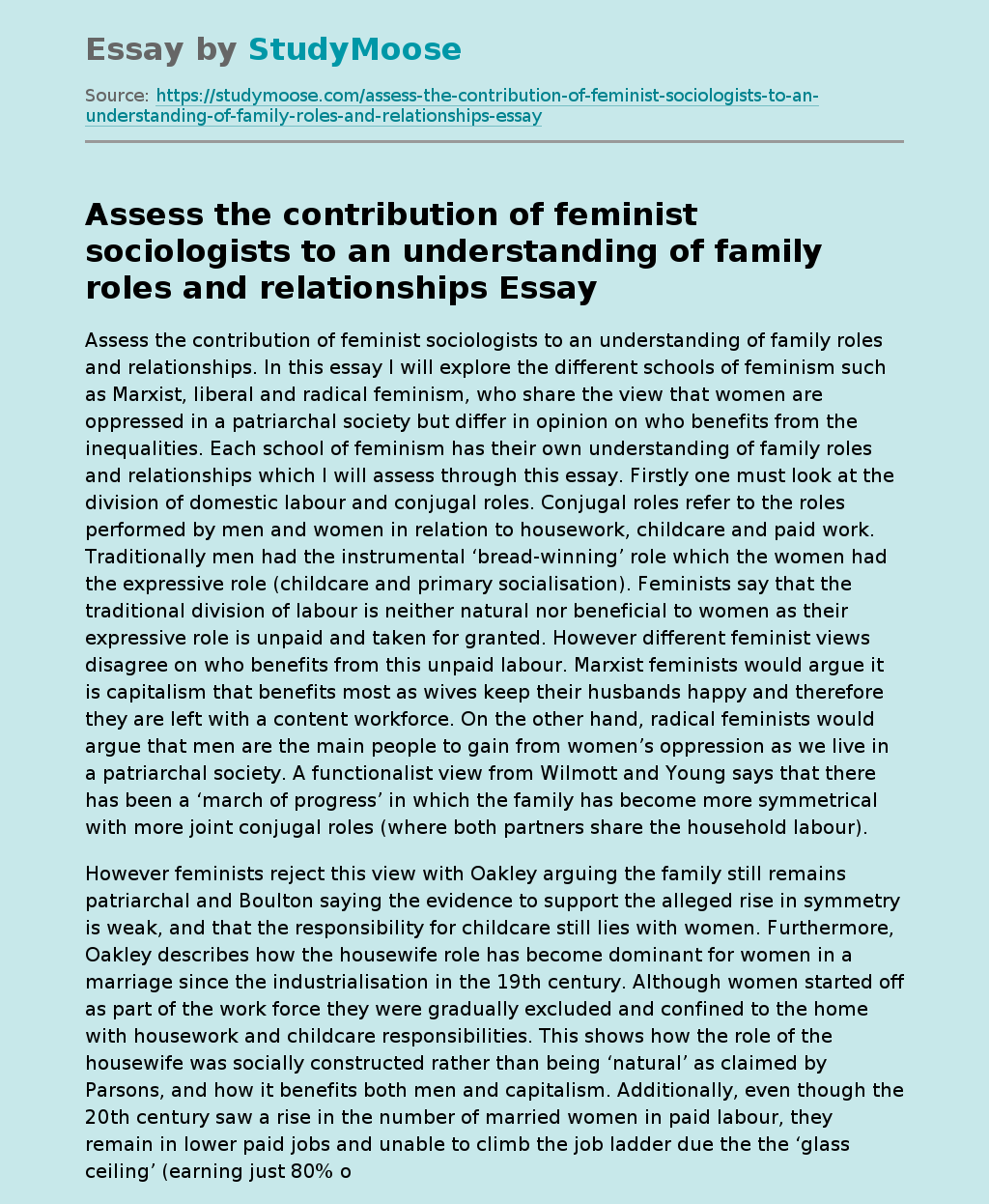