Thailand is a small country in Southeast Asia, sharing a peninsula with Burma, Cambodia, Laos and Vietnam. Like all local and national cuisines, the food of Thailand reveals a great deal about the country—it is a palimpsest of its political history, its trade, and its geography. Thailand sits between the cultural and political powers of India and China, and its food is clearly influenced by both. Yet Thailand’s food, like her people, has maintained its own distinct.

Thailand is not a very big nor a very rich country, but it is unique.

Turn in your highest-quality paper
Get a qualified writer to help you with
“ Asian Cuisine: Thailand Foods ”
Get high-quality paper
NEW! AI matching with writers

It has a way of life that mixes ancient ritual with the ways of the modern world. Thailand is most fortunate, with both the land and surrounding seas yielding rich harvests. The staple, rice, is grown in abundance, as do the numerous varieties of vegetables, fruits, herbs, and spices that enliven the Thai palate. Despite all the problems of the modern world Thailand still has much of old Siam.

Thai cooking places emphasis on lightly prepared dishes with strong aromatic components. The spiciness of Thai cuisine is well known. As with other Asian cuisines, balance, detail and variety are of great significance to Thai chefs. Thai food is known for its balance of three to four fundamental taste senses in each dish or the overall meal: sour, sweet, salty, and bitter.

As an acknowledged expert of Thai cuisine, David Thompson, explains in an interview: “Thai food ain’t about simplicity. It’s about the juggling of disparate elements to create a harmonious finish.

Like a complex musical chord it’s got to have a smooth surface but it doesn’t matter what’s happening underneath. Simplicity isn’t the dictum here, at all. Some westerners think it’s a jumble of flavours, but to a Thai that’s important, it’s the complexity they delight in.

Thai food is also known for its enthusiastic use of fresh (rather than dried) herbs and spices as well as fish sauce. Each Thai dish has more than 3-4 flavors. The ingredients of each dish helps to not only harmonize all different flavors but also to make it mouth wateringly delicious.

Traditionally, Thai cooks & families usually needed quite a long time to prepare the ingredients and to cook, therefore, cooperation and team work is needed to cook a family meal. The process of Thai cuisine explains Thai life: its traditions, customs and culture. It shows Thai families were large, in which its family members live together with a warm, close relationship. In cooking, Thai family members have their fair share of helping as a team.

With their Buddhist background, Thais shunned the use of large animals in big chunks. Big cuts of meat were shredded and laced with herbs and spices. Traditional Thai cooking methods were stewing and baking, or grilling. Chinese influences saw the introduction of frying, stir frying and deep-frying. Culinary influences from the 17th century onwards included Portuguese, Dutch, French and Japanese.

Chillies were introduced to Thai cooking during the late 1600s by Portuguese missionaries who had acquired a taste for them while serving in South America.

Thais were very adapt at ‘Siamese-icing’ foreign cooking methods, and substituting ingredients. The ghee used in Indian cooking was replaced by coconut oil, and coconut milk substituted for other daily products. Overpowering pure spices were toned down and enhanced by fresh herbs such as lemon grass and galanga. Eventually, fewer and less spices were used in Thai curries, while the use of fresh herbs increased. It is generally acknowledged that Thai curries burn intensely, but briefly, whereas other curries, with strong spices, burn for longer periods. Instead of serving dishes in courses, a Thai meal is served all at once, permitting dinners to enjoy complementary combinations of different tastes.

A proper Thai meal should consist of a soup, a curry dish with condiments, a dip with accompanying fish and vegetables. A spiced salad may replace the curry dish. The soup can also be spicy, but the curry should be replaced by non spiced items. There must be a harmony of tastes and textures within individual dishes and the entire meal.

Although considered as a single cuisine, Thai food would be more accurately described as four regional cuisines corresponding to the four main regions of the country: Northern, Northeastern (or Isan), Central, and Southern. Each cuisine sharing similar foods or derived from those of neighboring countries.

The dishes of Northern Thailand have light flavors, with a little spices, not very hot with chillies, not salty and most without sugar. The popular dishes are Sai-ua (Thai northern sausages), Nam-Prig Ong (Minced pork and tomato chillies paste), Kaeng Kare (vegetarian curry), and Cap Moo (Som Tam (papaya salad) is a north-eastern dish).

The cuisine of Northeastern (or Isan) Thailand is heavily influenced by Laos. For example, Lap and Tom Sabb. Traditionally very spicy and strong tasting dishes, which show that north-eastern Thais like strong flavors with chillies, salt, herbs, and spices.

The south has a very strong flavor of food with spicy herbs, like turmeric, and tend to contain coconut milk. For example, Kaeng Leang, Kaeng Tai-pla, and Kua Kling.

In fact, Thai food always has various kinds of vegetables as a main ingredient. These can be found in many curry dishes with or without coconut milk, stir fried, salad, and eaten with chillies paste. As the Thai food’s ingredients have small quantities of fat and meat, Thai people are fortunate in their fat intake being far less than most westerners.

Many popular dishes eaten in Thailand were originally Chinese dishes which were introduced to Thailand by Chinese emigration. Such dishes include Jok (Rice soup), Kway teow (noodle dishes), Khao Kha Moo or Moo Pa-loh (Pork stew, with or without rice) and Khao Mun Gai (Boiled chicken on lightly oily steamed rice). However, Thai people adapted and modified these dishes for local Thai flavor and taste.

Not only the unique taste in each dish, there are more reasons why Thai food is popular among foreigners. Decoration, Thai food has an attractive decoration inducing appetites. Such as, Thai fruit and vegetable carving is an art which has been introduced to dishes, which makes you feel fascinated with the delicate preparation. Also, Thai food has both values of nutrition and medicine, obtained from ingredients such as vegetables, spices and herbs and without artificial flavoring substances. Moreover, Thai food can be harmoniously taken with other food, for example, Pad Kaprao as spaghetti sauce, and Nam-prig Pao, chili paste, as sandwich filling or bread spread.

Thai folk wisdom, art and Thai culture is translated in Thai food. It reveals the characteristics of Thai people: their delicate taste, discipline, rules of conduct, artistic taste and human relationship. Hence, Thai cuisine is not only about food but it is an art to learn.

Thai cuisine is not only about food but it is an art to learn.

Thai food is eaten with a fork and spoon. Even single dish meals such as fried rice with pork, or steamed rice topped with roasted duck, are served in bite-sized slices or chunks obviating the need for a knife. The spoon is used to convey food to the mouth. Ideally, eating Thai food is a communal affair involving two or more people, principally because the greater the number of diners the greater the number of dishes ordered. Generally speaking, two diners order three dishes in addition to their own individual plates of steamed rice.

Thais do not use knives and forks but forks and spoons, holding the fork in their left hand to help get the food onto the right-hand-held spoon. Each spoonful should be moderately filled to conform with accepted custom. Eating by stuffing the mouth full is considered impolite. There shouldn’t be any sound of scraping the utensils on the plate nor should there be grains of rice on the lips. The Thais do not scoop portions onto their plates as home style serving in the west tends to do. They share from a common dish, taking only enough for a bite or two at a time. This way one avoids seeming too greedy and everyone has an ample share of each dish.

What Comprises a Thai Meal :

❖ Titbits
These can be hors d’oeuvres, accompaniments, side dishes, and/or snacks. They include spring rolls, satay, puffed rice cakes with herbed topping. They represent the playful and creative nature of the Thais.

❖ Salads
A harmony of tastes and herbal flavours are essential. Major tastes are sour, sweet and salty. Spiciness comes in different degrees according to meat textures and occasions.

❖ Dips
Dips entail some complexity. They can be the major dish of a meal with accompaniments of vegetables and some meats. When dips are made thinly, they can be used as salad designs. A particular and simple dip is made from chilies, garlic, dried shrimps, lime juice, fish sauce, sugar and shrimp paste.

❖ Soups
A good meal for an average person may consist simply of a soup and rice. Traditional Thai soups are unique because they embody more flavours and textures than can be found in other types of food.

❖ Single Dishes
Complete meals in themselves , they include rice and noodle dishes such as Khao Phat and Phat Thai.

❖ Desserts
No good meal is complete without a Thai dessert. Uniformly sweet, they are particularly welcome after a strongly spiced and herbed meal.

The tastes of modern-day Thailand boast an ancient history. As early as the thirteenth-century, the Thai people had established what might be considered the heart of Siamese cuisine as we know it today: various types of meat and seafood combined with local vegetables, herbs and spices such as garlic and pepper, and served with rice. Later, the Chinese brought noodles to Thailand, as well as the introduction of the most important Thai cooking tool: the steel wok.

Thai cuisine is also heavily influenced by Indian spices and flavours, which is evident in its famous green, red, and yellow curries. However, it would be nearly impossible to confuse an Indian curry with one from Thailand. Although Thai curry incorporates many Indian spices in its pastes, it still manages to maintain its own unique flavour with the addition of local spices and ingredients, such as Thai holy basil, lemongrass, and galangal (Thai ginger). 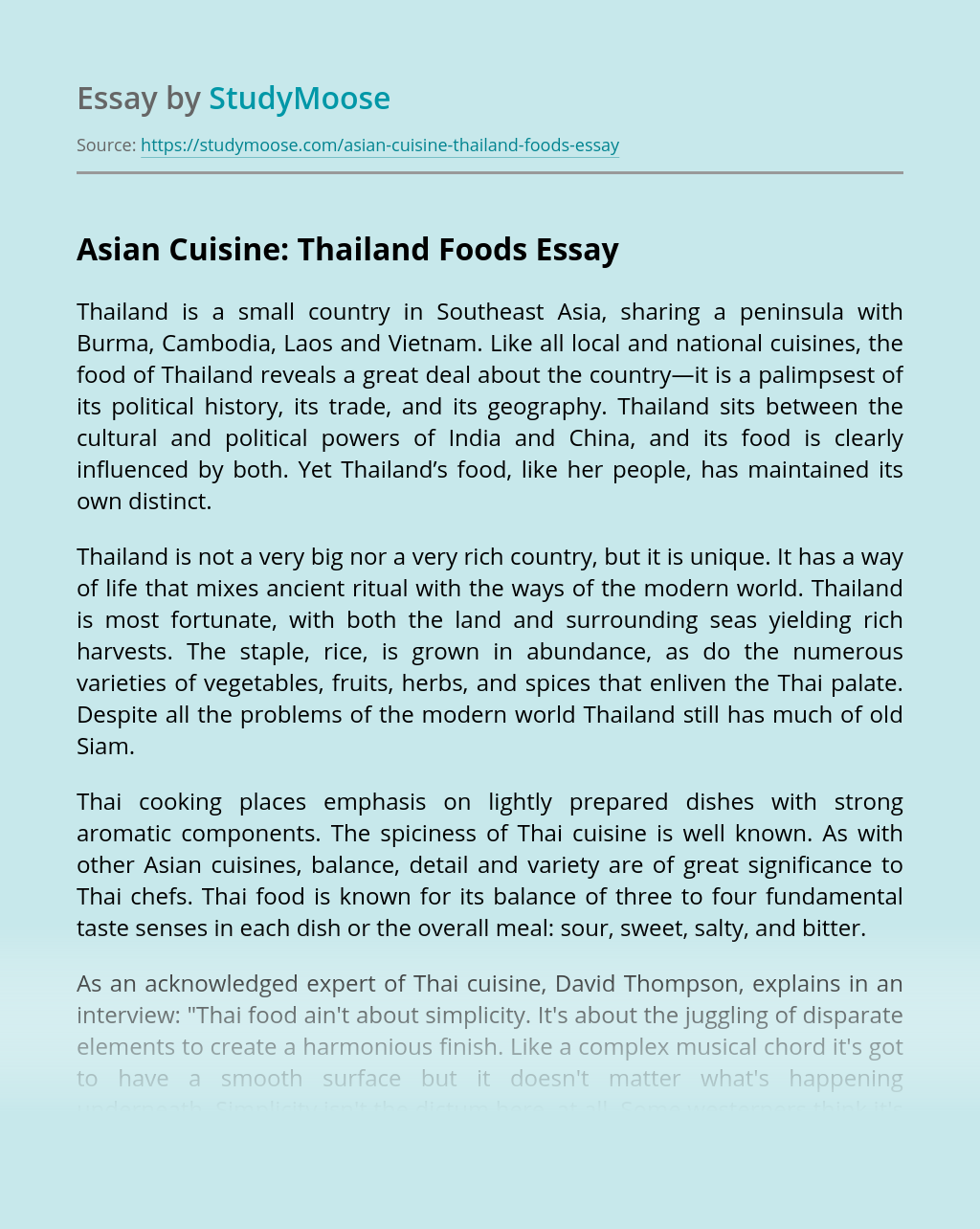 Turn in your highest-quality paper
Get a qualified writer to help you with
“ Asian Cuisine: Thailand Foods ”
Get high-quality paper
Helping students since 2015
Stay Safe, Stay Original