As the youth fights for equality for all, is their justice really being served? There is always a fight citizens face with inequality and it is increasing over time. The tax and transfer system can make a difference in lowering the difference in the market incomes. Although, the political side will use the tax system, it might be limited. Also, the public should be letting the labour market development know if they want to work towards equality because if not, a difference will not be made.

Don't use plagiarized sources. Get your custom essay on
“ As the youth fights for equality for all is their justice really ”
Get custom paper
NEW! smart matching with writer

Furthermore, the authors touch on the fact that, while taxes and transfers can work to lower inequality in a certain way, politicians will try and state a firm hold on increases in earnings inequality through these policy tools alone may not exist.

This was not the case because a big part of growing inequality has to do with the cut of incomes earned by those who are at the top of the chain. For someone to be in the top one percent in Canada, the person should be earning near $230,000 annually. This is showing that the average one percentage earn about $450,000 while comparing to everyone else that is below is only making around ,000.

This is a significant difference that raises questions on why a change has there not been. The reason for this is because the bigger companies is dominating the system and whatever they want to do, they can because they make more than everyone else. This results in majority of people working for them and if they do not want to handle complaints, they can always replace an employee. Equality cannot change if the companies that are making more than everyone combined are also in power of the majority of revenue coming into Canada. If the one percent want something to change, they can make it happen while lower wage citizens will either work to survive or be homeless.

In addition, majority of the one percent are men and usually have a university degree. In relative to the United States, only 10% of work is finance while the rest are senior managers and CEOs at 14%. It is difficult to move up in class if high paying jobs acquire university degrees and after someone graduates, they will need to pay off their debt before they are financially in trouble. Tuition is increasing, making it difficult for majority of Canadians to get educated. This is making uneducated citizens forced to work for minimum wage jobs that put more money in owners leaving inequality to grow.

Moreover, the authors explain the fundamental explanations for the developments relative to the gap between the one percent of Canadians earning and the rest. Overall, What the authors sees as the policy options to change inequality is by using the tax-transfer system. Also raising the top marginal tax rates to 50% or more but this will not happen because than the one percent making over $230,000 will say they are working hard to end up getting more than half of their money taken away from them. The change would allow middle class to have more distribution of money, but it will not happen because everyone is selfish and only want to support themselves, leaving a huge gap from being poor to rich. Similarity, those addressing the underlying labour market infrastructure and institutions will allow a change to be made but the chances for this to happen is slim. But the authors leave the politics of public policy aside. They only make a connection between the growth in inequality connecting to the higher share of income to the top one percent, leaving the development of taxing the rich more to fix inequality. If the government raise minimum wage, this will not fix the problem because it will result in companies bringing up the prices of products, bringing everyone back to the same spot before minimum wage increased.

The article offers a handy amount of information relating to the summary of major facts, policy options dealing with inequality in Canada and explanations. Recognizing that these themes are different in every country than elsewhere because the GDP is different in each country. The article leaves some important themes relating to the connection between inequality and opportunity. These have been central to US and UK discussions because it will help unfold where the nation will be in the future. Canada is generally seen as a more mobile society through generations. Canada also has a feebler tie between parent and child earnings than in the UK and US. Overall, this reflects to labour familie, markets, and how liberal government policy was in the past. If the end result is that the higher inequality can support for progressive tax and transfer programs, then this leaves society to question if change is more beneficial for the balance between family, market, and state. This shows if inequality will ever change because the rich is getting wealthier and the poor are earning less each year. Therefore, this leaves us to believe it because of the degree of social mobility.

As the youth fights for equality for all is their justice really. (2019, Dec 05). Retrieved from https://studymoose.com/as-the-youth-fights-for-equality-for-all-is-their-justice-really-example-essay 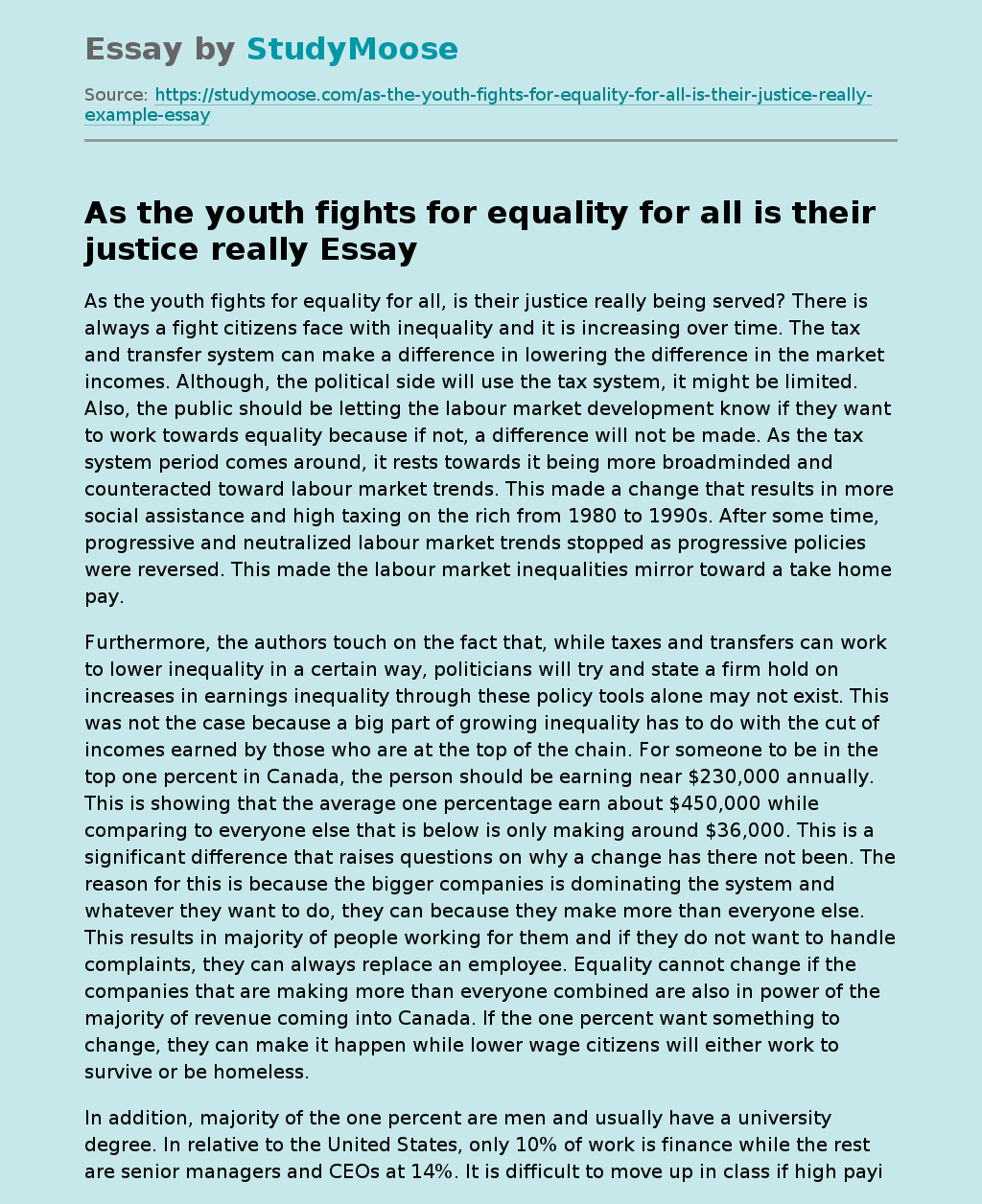