As Nature Made Him: Nature vs. Nurture

The argument over nature vs. nurture has continued to torture society by presenting cases in which we simply don’t know which rules to apply. One of these cases is sex change. Sex change is a very big step to take in a person’s life and it involves the careful consideration of many factors; but it is not a simple answer to a complex problem such as hermaphroditism or even blotched circumcisions. These choices can be difficult because we don’t quite understand which factors to consider given that we haven’t determined whether it is nature or nurture that determines a child’s sexual identity.

Don't use plagiarized sources. Get your custom essay on
“ As Nature Made Him: Nature vs. Nurture ”
Get custom paper
NEW! smart matching with writer

Until we solve this riddle, people shouldn’t try to change a child’s sex before the child can decipher his or her own sexual identity. Nature will solve the problem without human interference. Over the years, sex change in infants with ambiguous or deformed genitals has become more and more popular. Often times, however, the child is unhappy with his/her sexual assignment.

Colapinto writes, “…Dr. Harry Benjamin himself, who had recently reported that in forty-seven out of eighty-seen of his patients, he ‘could find no evidence that childhood conditioning’ was involved in their conviction that they were living in the wrong sex” (Colapinto 45).

This suggests that nature rather than nurture is the underlying factor of sexual identity. Dr. John Money, a doctor at John Hopkins Hospital, was the head doctor of the world famous John/Joan “twin case. ” His theories at the time seemed to be very intelligently thought out at the time, but have now been proven otherwise, explaining why his conduction of the “twin case” was unsuccessful.

Money realized in his research on hermaphroditical children, “the ones that were raised as girls were happy girls, and the ones raised as boys were happy boys… It seemed to suggest to him that hermaphrodites were born malleable in their sex” (Youtube). However, Money was too quick to generalize this observation to everyone, rather than only. Although the gravely unsuccessful twin case was and is brought up a lot in the debate concerning nature vs. nurture, there are still scientists who believe that it is nurture rather than nature that determines sexual identity.

These scientists still have hope that there may be an answer to the mystery of sexual identity. Jonis Portfolio says on gender, “It is an intricate balance between hormones, brain function, attitudes, behaviors, and social expectations” (Jonis Portfolio). Colapinto as well as the authors of Jonis Portfolio mention how “vehemently was “she” determined to live in the sex of her genes and chromosomes” (Colapinto 72). Children who are born normally, but have been sexually reassigned, usually present behaviors that resemble the sex written in their genetic code.

The few exceptions remain outliers. Once scientists started to poke holes in Dr. Money’s theories, they realized how unreasonable it was to try to sexually reassign a children who were already destined by nature to be a certain gender. Jonis says, “Gender identification is a complex issue” (Jonis Portfolio). Scientists try too hard to try to find a solution to this problem that they are too quick to draw conclusions and make decisions. Colapinto writes that the “New York Times book review on Man vs. Woman Boy vs.

Girl said the book’s argument was ‘If you tell a boy he is a girl, and raise him as one, he will want to do feminine things’” (Colapinto 70). Man vs. Woman Boy vs. Girl is a book written by Dr. Money. Money drew so many false conclusions in his work that his theories were unreliable. However, he was such a respected figure in the science world that even his most outlandish views were supported by many. This is how his theories came to be so widely accepted. We know now, however, that he was pretty far off the mark in his line of research.

We know now that gender assignment should be left to nature, rather than nurture, especially was no problem with the natural gender to begin with. Too often, children have been burdened with the task of finding themselves, i. e. discovering their sexual identity. If doctors and scientists continue to complicate children’s lives by attempting to change who these children were destined to be, they will definitely start to lose themselves. This is ultimately what happened in the John/Joan case where David Reimer, which was John/Joan’s real name, when he took his own life.

Nurture may be a factor in sexual identity, but research suggests that nature is an even stronger factor. Scientists and doctors shouldn’t interfere with nature because all in all, this single factor will shine through the cracks. Bibliography Colapinto, John. As Nature Made Him: The Boy Who Was Raised as a Girl. New York: HarperCollins, 2000. Print. As Nature Made Him by John Colapinto was published in 2000 to give readers a full understanding of the John/Joan twin case in which a biologically born male was sexually reassigned a girl due to a blotched circumcision.

Web. 01 Oct. 2013. . This portfolio was published online by Jonis Portfolio to recognize and argue the issue of nature vs. nurture and its concern with sexual identity. It describes many cases where biologically born males who were raised as females so vehemently were determined to be males. It describes nature as a leading factor over nurture for determining sexual identity. It’s helpful to this essay because it presents some major arguments concerning the matter of nature vs. nurture. It even describes the John/Joan case and what happened there. YouTube.

Prod. Allan Gregg. Perf. Allan Gregg and John Colapinto. YouTube. YouTube, 04 June 2012. Web. 01 Oct. 2013. . This video is an interview with John Colapinto done by Allan Gregg. Colapinto is the writer of As Nature Made Him and in this interview he is describing to viewers the twin case, or the John/Joan case. David Reimer, John/Joan himself, couldn’t do the interview because unfortunately he took his own life in 2002. This source is helpful because it is a short recap of the book and viewers may understand it better than they would while reading about it.

As Nature Made Him: Nature vs. Nurture. (2016, Nov 13). Retrieved from https://studymoose.com/as-nature-made-him-nature-vs-nurture-essay 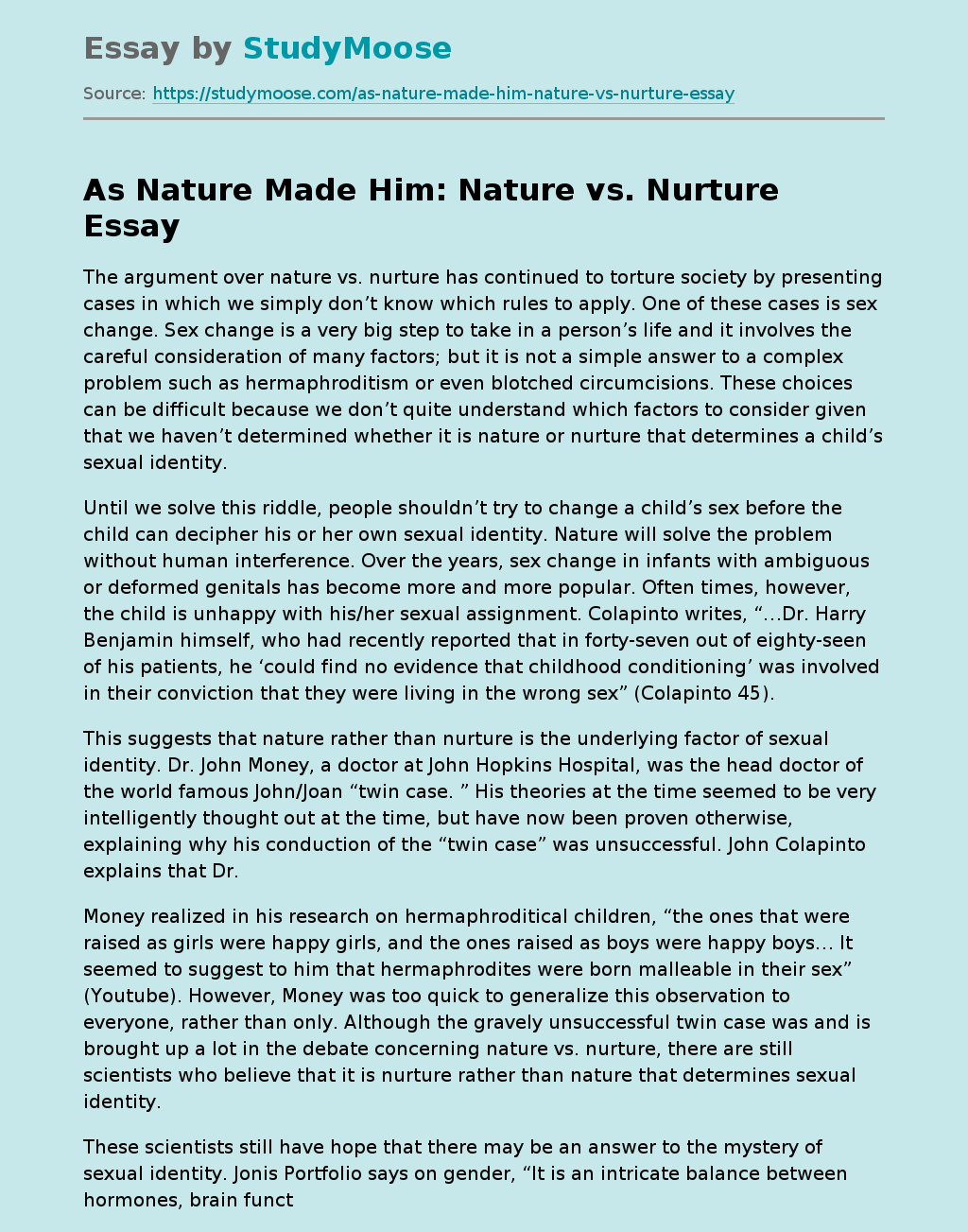