While there is a tendency to misspell his name as “Aryabhatta” by analogy with other names having the “bhatta” suffix, his name is properly spelled Aryabhata: every astronomical text spells his name thus, including Brahmagupta’s references to him “in more than a hundred places by name”. Furthermore, in most instances “Aryabhatta” does not fit the metre either.

Time and place of birth Aryabhata mentions in the Aryabhatiya that it was composed 3,630 years into the Kali Yuga, when he was 23 years old.

This corresponds to 499 CE, and implies that he was born in 476. Aryabhata was born in Taregna (literally, song of the stars), which is a small town in Bihar, India, about 30 km (19 mi) from Patna (then known as Pataliputra), the capital city of Bihar State. Evidences justify his birth there. In Taregna Aryabhata set up an Astronomical Observatory in the Sun Temple 6th century. There is no evidence that he was born outside Patliputra and traveled to Magadha, the centre of instruction, culture and knowledge for his studies where he even set up a coaching institute.

However, early Buddhist texts describe Ashmaka as being further south, in dakshinapath or the Deccan, while other texts describe the Ashmakas as having fought Alexander.

It is fairly certain that, at some point, he went to Kusumapura for advanced studies and lived there for some time. Both Hindu and Buddhist tradition, as well as Bhāskara I (CE 629), identify Kusumapura as Pāṭaliputra, modern Patna. A verse mentions that Aryabhata was the head of an institution (kulapati) at Kusumapura, and, because the university of Nalanda was in Pataliputra at the time and had an astronomical observatory, it is speculated that Aryabhata might have been the head of the Nalanda university as well.

Aryabhata is also reputed to have set up an observatory at the Sun temple in Taregana, Bihar.

Other hypotheses Some archeological evidence suggests that Aryabhata could have originated from the present day Kodungallur which was the historical capital city of Thiruvanchikkulam of ancient Kerala. For instance, one hypothesis was that aśmaka (Sanskrit for “stone”) may be the region in Kerala that is now known as Koṭuṅṅallūr, based on the belief that it was earlier known as Koṭum-Kal-l-ūr (“city of hard stones”); however, old records show that the city was actually Koṭum-kol-ūr (“city of strict governance”). Similarly, the fact that several commentaries on the Aryabhatiya have come from Kerala were used to suggest that it was Aryabhata’s main place of life and activity; however, many commentaries have come from outside Kerala. Aryabhata mentions “Lanka” on several occasions in the Aryabhatiya, but his “Lanka” is an abstraction, standing for a point on the equator at the same longitude as his Ujjayini.

Works Aryabhata is the author of several treatises on mathematics and astronomy, some of which are lost. His major work, Aryabhatiya, a compendium of mathematics and astronomy, was extensively referred to in the Indian mathematical literature and has survived to modern times. The mathematical part of the Aryabhatiya covers arithmetic, algebra, plane trigonometry, and spherical trigonometry. It also contains continued fractions, quadratic equations, sums-of-power series, and a table of sines. The Arya-siddhanta, a lot work on astronomical computations, is known through the writings of Aryabhata’s contemporary, Varahamihira, and later mathematicians and commentators, including Brahmagupta and Bhaskara I.

This work appears to be based on the older Surya Siddhanta and uses the midnight-day reckoning, as opposed to sunrise in Aryabhatiya. It also contained a description of several astronomical instruments: the gnomon (shanku-yantra), a shadow instrument (chhAyA-yantra), possibly angle-measuring devices, semicircular and circular (dhanur-yantra / chakra-yantra), a cylindrical stick yasti-yantra, an umbrella-shaped device called the chhatra-yantra, and water clocks of at least two types, bow-shaped and cylindrical. A third text, which may have survived in the Arabic translation, is Al ntf or Al-nanf. It claims that it is a translation by Aryabhata, but the Sanskrit name of this work is not known. Probably dating from the 9th century, it is mentioned by the Persian scholar and chronicler of India 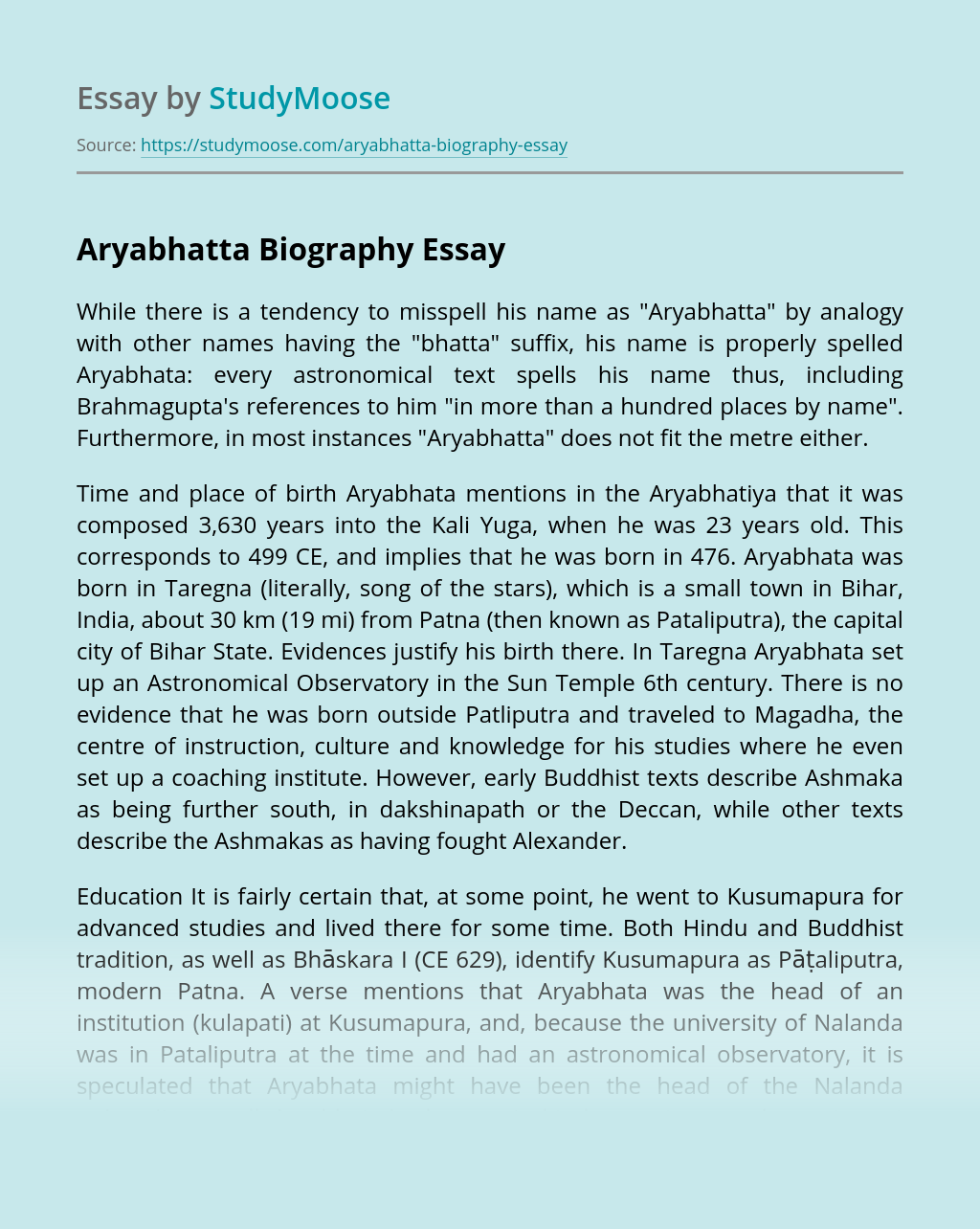