Downloads: 49
Views: 477
Subject matter
The work displays the image of a single Coca-Cola bottle is repeated in regular rows, seven high by sixteen across, above the company’s logo, printed in bright red, representing the pop art style he had made so popular.
Ideas and meaning
in artworks
The repetitive imagery and standardized format evokes the look of mechanical and mass reproduction, a key part of American culture that Warhol wished to expose in his works. He wished to expose the materialistic and automated nature of society, in his own unique way
Working methods
‘Green Coca-Cola Bottles’ was created the year that Andy Warhol developed his pioneering silkscreen technique, 1962, which allowed him to produce his paintings and illustrations through a mechanical process that paralleled his use (and the manufactures production) of mass culture subjects.

While still a print, the black outlines were probably stamped by hand from a single carved woodblock onto green areas printed in a grid pattern, which displays the unique and varying techniques Warhol used.

Early influences
The art and ideas of French painter, sculptor and writer Marcel Duchamp, perhaps more than those of any other 20th century artist, have radically altered our understanding of what constitutes an object of art. Among the qualities that Andy Warhol and Marcel Duchamp share are a desire to shock, a taste for celebrity, a belief in the everyday object.
Later influences
Muriel Latow, a friend of Warhol’s in NY, told him he should make art on “something people see every day.”
Historical and/or cultural context
Warhol once criticized and glorified the surface values of America’s commercialised post-war culture using the coke as an example. “A Coke is a Coke,” he explained, “and no amount of money can get you a better Coke than the one the bum on the corner is drinking.” To him, the Coca-Cola brand epitomised everything American culture had become, and everything he wished to expose.
Artist’s style/aesthetic qualities
Warhol has created contrast in the black lines against the bright green of the background, each with subtle differences in the work’s pattern; each of the bottles differs in both the evenness of the green underpainting and in the clarity of its stamped profile. The printing process also resulted in the bottles being printed slightly askew, disturbing the regularity and symmetry of the grid and making the bottles appear simultaneously handmade and individualized, yet streamlined and mass-produced.
Green Coca-Cola Bottles, 1962 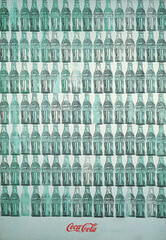 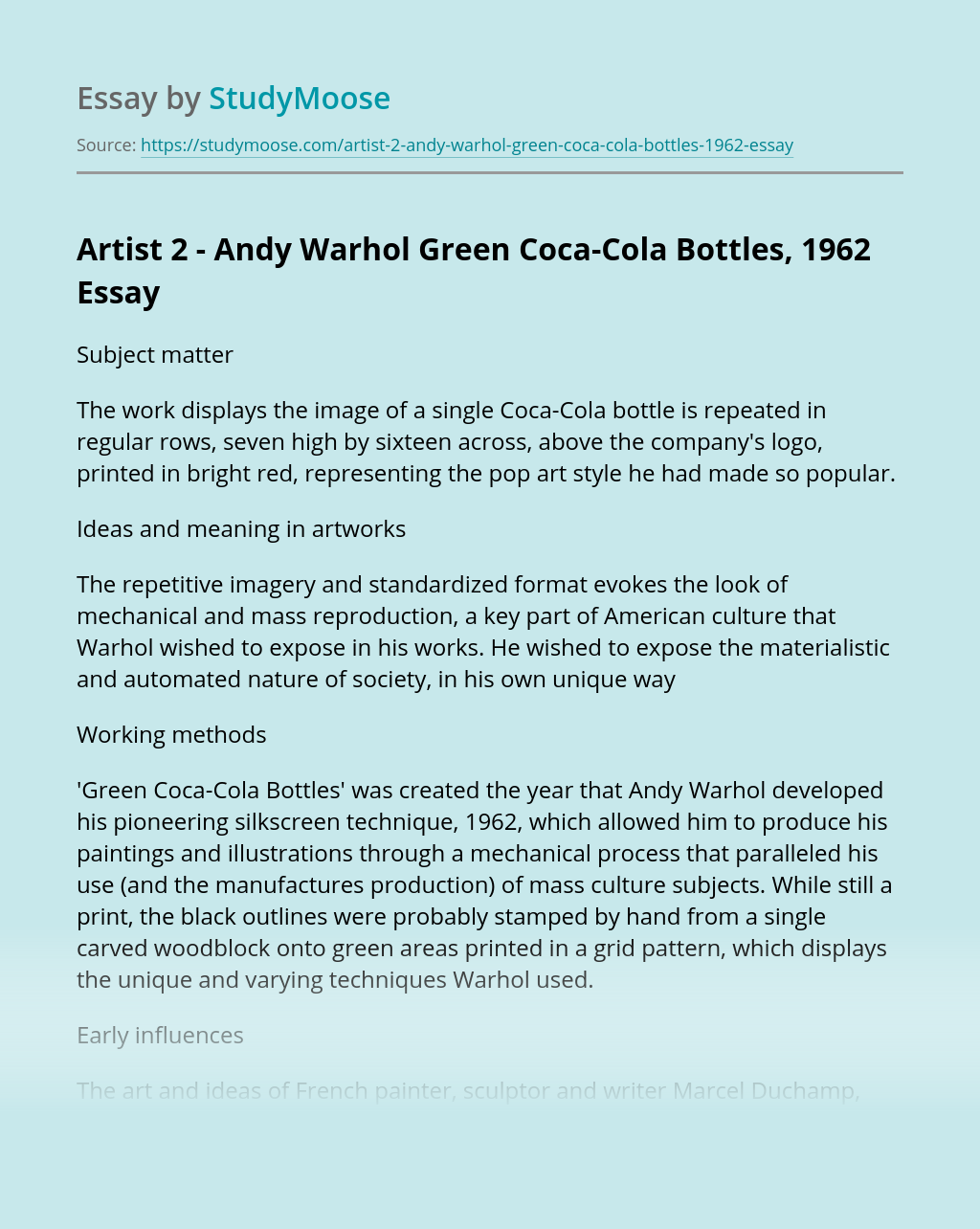 A marketing strategy is a company’s hope to achieve strong and profitable customer relationships by targeting certain customers, using a marketing mix, and implementation. In an ideal world, strategies at all levels of the organization should be well spoken and understood. Interpretations of the strategies then result in realistic, well-defined marketing plans and programs which... VIEW ESSAY

View sample
My Father, the Person I Admire the Most

I admire a lot of people people but the person i admire the most is my mother .She is the most important person in my life.There is no reason for me to live without her by my side. My mom is a doctor. She loved to help other because she says it was her dream... VIEW ESSAY

Stripped of Shakespeare’s poetic style and skilful characterization, Macbeth is revealed as little more than a petty tyrant. Like Machiavelli’s Prince, Macbeth seeks power as an end in itself and sees any means as justified provided it helps him achieve his goal. It is a standard image of power: an individual, or small group, occupying... VIEW ESSAY

Compliance means doing what other people in our social standing do in our daily lives. Most people, in most social groups, conform in everyday things like speech, dress codes, eating habits etc. This kind of conformity is known as ‘’Social control’’- the numerous pressure as individuals grow turns them from babies into members of our... VIEW ESSAY

View sample
What Is the Good Life?

The “good life” is a phrase that is used to describe the ideal life for one to live. According to Aristotle, the good life should be free of any greed, full of virtue, pleasure, and friendships, as well as excellence in whatever you may do. I would agree with all of the things he believed... VIEW ESSAY