As normative concept, psychology study differs across because of different cultural backgrounds and basis. As Sikolohiyang Filipino evolved and continues its study, it makes a mark on the world psychology as it become a breakthrough to it. Despite of its greatest oponent The American Psychology. This will extensively support the study of Virgilio G. Enriquez about Pagkataong Pilipino- The Value System of Philippine Psychology. Because I always wonder what value or values we should practice inorder to have a non-violence living?

If ever, we could identify this values, how could we imply this equally? Without any doubts after implementing it? BODY As stated earlier Sikolohiyang Filipino has become a breakthrough to world psychology.

Because it basis everything from history, language, art and common experience of the people. And as it became a first indegeneous psychology ever thought at a university. We psychology students who have been studying some of this values and how thus this affect fillipino culture. On our study we encounter lots of write-ups about Sikolohiyang Filipino.

That the basis of sikolohiyang filipino has been influenced by lots of cultures from other countries some from Western the others from Eastern and ither Asian countries. Because of the colonialization brought to our country by other countries long time ago. That it become an breakthrough for world psychology. Culture. For me it plays a lot in the study of sikolohiyang filipino, because it refers to the practices and traditions that have been handed down from generation to generation. But then Change is the only permanent thing in this world.

And what it trying to prove is that culture changes. It was not very difficult to prove on the generation right now. Lets start from the clothes they wear from the baro’t saya before influenced by the spanished colonial. Right now we had this skinny jeans, mini skirt, spaghetti strapped dress and lots more influenced by the american. And since we all know that we are know on the age of global technology where typewiters has been changed by computers and laptops, where snail mail evolved to electronic mails and cellular phones. That before it was just a WANT and now it became a NEED.

Filipino culture is no exception. Filipino culture have indeed have changed through time. The Philippines is now the text capital of the world because we are the country that sends the most number of text messages per day. Like how our culture did. That the before basis: Three Core Concept of the values of the Phillipine Personality Theory: the Kapwa, Pakiramdam and Kagandahang loob that has been interpreted as share identity, shared inner perception and shared humanity must be change. And its greatest winning oponent Kalayaan.

That this basis was just now only a part of the history of Sikolohiyang Filipino. That it may be remembered again. Because like technology and lifestyle, sikolohiyang filipino must evolved too and join the new generation. We may erase or preserve and just add another basis. But before this happen we need a lot of studies to conduct of what are the factors of having this kind of culture or behaviorism. But now is for us to prove that Sikolohiyang Filipino still present and existing, that maybe some ways of filipino living may change but then we can preseve some of its importance.

Value the contributions of this. And implement it again slowly and one by one. Maybe it needs a hard work angd a long time before having it back again but then we need to do it. To prove that we have our own. Originally our OWN !!! REFERECE Indegeneous Filipino Values: A Foundation for a Culture of Non-Violence by Paper prepared for the forum: Towards A Culture of Non Violence,by Katrin de Guia, Ph. D. , author of “Kapwa: The Self in the Other”, 2005 , Anvil Publishing Inc. , pasig, M. M. Virgilio G. 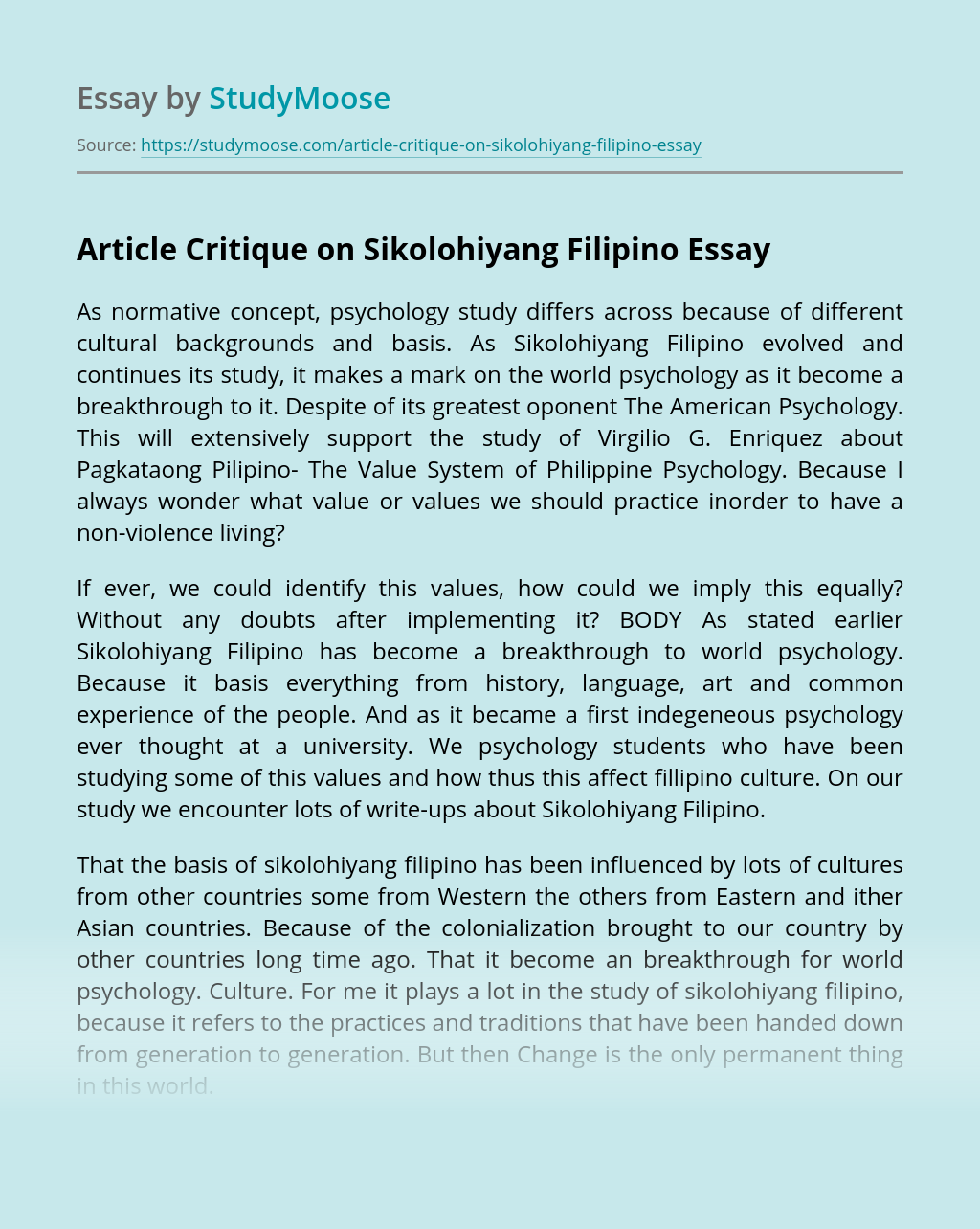