Arthur Miller "a View from the Bridge". Is Eddie Responsible for His Own Death?

In order to understand to what extent Eddie is responsible for his own death, it’s necessary to consider which elements led Eddie to be killed by Marco

Throughout the story told by Arthur Miller, we can see that the behaviour of Eddie plays a role in his death. He could have had a common life but the tragedy comes from the combination of different events which are linked. The most important element of this story is the relationship between Eddie and Catherine. We can see that Eddie is too protective with Catherine : «because most people ain’t people.

She’s goin to work; plumbers; they’ll chew her to pieces if she don’t watch out» (A view from the bridge) We can also realise that Eddie loves his wife’s niece Catherine. This love is not allowed. «You want somethin’ else, Eddie, and you can never have her» Because of his love for Catherine, Eddie becomes jealous and doesn’t like Rodolpho.

Eddie will provoke him at different times. First he treats Rodolpho as if he was homosexual. « And with that wacky hair ; he’s like a chorus girl or sump’m » Then, Eddie provokes him with the boxing lesson. 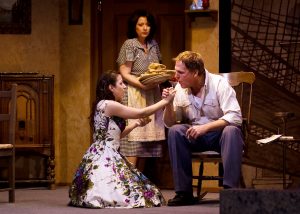 He takes advantage of the situation to hurt Rodolpho. «Why ? I didn’t hurt him. Did I hurt you kid ? » But this beginning of violence leads Marco to protect his brother and to face Eddie. It’s at the end of Act one that a tension begins between Eddie and Beatrice’s cousins.

This leads Eddie to a major conflict. On the one hand he belongs to the Italian community and he wants to respect the laws of the «familiy», but on the other hand he knows that the American law can help him to get rid of Rodolpho and Marco to keep Catherine single.

Eddie thinks that his niece deserves better than Rodolphpo : «To show her what he is ! So she would see, once and for all !… So what do I gotta do now ? «When Eddie decides to denounce Marco and Rodolpho, he knows that this decision is heavy and will have a lot of consequences. He will lose his honour and he is conscious that in Italy this act is punished « In my country he would be dead now. He would not live this long» A bit later Eddie realises that there is no escape from this situation but death. The Italian community will never forgive him for having denounced Marco and Rodolpho.

And at this point, Eddie does not want to admit his error, he is obsessed by getting the proof that he was right and that he did that because Marco did not respect his niece. So when Eddie says to Marco that he is a liar (which means that he wants to marry Catherine just to get his papers and not because he loves her), he knows very well that either he will kill him or that he will be killed by him, because there is no other alternative. All these different elements show how Eddie is responsible for his own death. Eddie is a common man but he becomes involved in a tragedy that Arthur Miller has remarkably built up.

Arthur Miller "a View from the Bridge". Is Eddie Responsible for His Own Death?. (2020, Jun 01). Retrieved from https://studymoose.com/arthur-miller-view-bridge-eddie-responsible-death-new-essay