Of the many crimes that are present in this day and age, one that not only vandalizes the property, but as well as historical background is that of art theft. A crime that has taken away the sanctity of churches as well as many other religious and historical sites. Thefts have ranged from WWII (World War II) to the times of the Holocaust. Of the items that were taken from the churches, relics were items of great priority. These items not only had great value to the churches they were stolen from, but a great value to relic collectors.

Turn in your highest-quality paper
Get a qualified writer to help you with
“ Art Theft ”
Get high-quality paper
NEW! AI matching with writer

Most of the items taking during these times were either sold or placed in underground storage. Most of these items that were place in these secret places were never to be seen again. From the times of these so called “relic hunters” to now, art theft has become something that has taken some extreme changes. It has evolved from crime that started with minor relic thefts to something that has become a worldwide crime in need of better prevention.

Art theft is a crime that has been on the rise for the last half of this century. “According to law enforcement officials, art theft now ranks second only to drugs as the world’s most lucrative illegal activity.” (Journal of Commerce) Whether bought, created, or stolen, art has become something that is of great demand. “Art theft has flourished as never before. Just keeping up with the number of stolen objects and their total value is a big-time guessing game.

” (Dudar) This is a problem that not only faces us as art owners and collectors, but museums and auction houses as well. Everyone possessing a piece of artwork is at risk of art theft. This artwork doesn’t have to be anything out of the ordinary to be a target. Along with famous paintings, sculptures, and other types of artwork, many insignificant or unrecognized pieces of artwork are being stolen too. “Most thefts appear to be the work of thieves without serious art education. Along with the good stuff, they are apt to sweep up junk – those sappy gift-shop paintings of kids with enormous eyes, for example, which no serious collector would covet.” (Lowenthal) On the other hand some of these thefts are being done by some of the best in the business. “Some thieves have turned out to be professionals who, following fashion, switched from robbing video stores to burgling art.

Some are actually specialists in vehicle thievery; they make off with a truck then discover that the freight includes some salable pictures. A few are insiders with easy access: doormen, night watchmen, butlers, occasionally even a curator satisfying a longing to own art he or she can’t afford.” (Lowenthal)With the demand of art increasing, museums and auction houses want to have the best of what there is to offer on display. Placing the best on display causes more of a risk of theft to take place. This is just one of the many issues that these places are faced with. “The issue facing security managers and owners of museums and galleries is this: Works of art are meant to be seen by the public or potential purchasers. Visitors expect to be allowed to scrutinize the objects on display. Thus, the museum’s assets are immediately susceptible to theft or damage, whether accidental or deliberate.” (Burrows, p.34)

Therefore a type of security must be in place to prevent this from happening. How should this security system designed? “In designing museum security, I suggest a three-step approach: (1) List what to protect. (2) Consider what is likely to happen to it. (3) Consider action to counter the threat.” (Burrows, p.34)This step seems obvious, yet is all too often neglected. Careful cataloging when goods arrive not only helps with future insurance claims but also greatly eases ongoing checks and any later disputes as to when damage occurred. In fact, more loss may occur through accidental damage during the setup of displays than through theft. In addition, damage may not be noticed for some time.

Invariably, displays are set up hastily and cataloging is bypassed unduly abbreviated. It’s important not only to list holdings but also to assess them qualitatively. (Burrows, p. 34, 37)Consider what is likely to happen to it:When one is considering the likely possibilities of what might happen to the pieces of artwork, they must “regard what is likely to happen to the assets, imagination and historical searching are needed.” (Burrows, p.37) In these searches one should examine what tendencies were shown in the previous thefts. They should also think of other possibilities that could happen.

Consider theft, vandalism, publicity-seeking, fire, and water damage. Of course, many incidents are not publicly reported. Museum management fears lost sponsorship, increases in insurance costs, and nervousness among potential lender and exhibitors. Unfortunately, those fears are well-founded. They are part of the hidden cost of crime. Reducing the likelihood of those ill effects is part of what one earns by implementing security. (Burrows, p.37)Consider action to counter the threat:Counter-action is the main ingredient in successfully preventing art theft. In this step one must examine how to property staff the place where artwork is being stored and what type of security systems will best suit this place. “Staffing is undoubtedly one of the crosses that security has to bear. In Boston, “police” were allowed access to a museum without external verification. They then robbed the museum.” (Burrows, p.37) Because of the opportunity of theft coming from security guards or from the inside, others measures must be taken too. “Mindful of that problem, many galleries include in their standard operating procedures instructions to telephone a police station before officers are admitted. Nevertheless, security staff invariably let them in unchecked.” (Burrows, p.37)

The strictness of security in museums and auction houses are greatly proportional to their respected role. The more thought of a museum or auction house is or the more famous one is, the better type of security they have. These types of well-known places constantly have security-training programs that are ongoing. Many of them have security workshops that their employees are required to attend. Flaws in this so-called human security are also something that is feared. “Any museum or gallery worth its salt has an ongoing training program that teaches security personnel how to react to various events. Yet horror stories abound, such as the one about a security officer who, seeing a vandal holding up a lighter to a flammable display piece, took no action.” (Burrows, p.37) Because of these flaws, many high-tech security systems are being installed.

Galleries and museums desperately need a reliable radio transmission system, with a range of integrated piezo and motion sensors, manufactured by a reliable company and installed by knowledgeable technicians. The overall combination seems to be too stringent a demand for the present structure … A number of new tagging systems have some on the market. The trick is to place a tag (and they’re cheap) on a valuable item and place receivers by doorways or restricted-flow areas. The receivers can then be coupled to alarms. Also, sensors can be placed at perimeter doors and coupled to automatic magnetic locks.

Video motion-sensing that has user-definable detection fields and is directly coupled to automatic alphanumeric paging to security officers is approaching the ultimate means of detection. (Burrows, p.38)With these systems and techniques being used by the museums and auction houses, the strain of handling art theft is being lifted from major research foundations. These foundations have been around for many years tracking down art thieves and missing pieces of art. Two major researches of these foundations are the International Foundation for Art Research (IFAR) and the Art Loss Register.

International Foundation for Art Research (IFAR)The International Foundation for Art Research, known to cops and collectors far and wide as IFAR … IFAR maintains an invaluable repository of data on missing goods ranging from masterworks to mind-boggling kitsch. Their computers, which house a clever program for storing and finding images of stolen valuables, now show more than 60,000 items carried away from homes and museums and other sites around the world in recent years … For 25 years these issues have occupied IFAR, a modestly funded, nonprofit enterprise … IFAR … keeps track of as much … as possible and often plays a role in recovering a purloined picture.

IFAR not only uses its computers when it comes to lost art. The foundation also publishes its own newsletter. “IFAReports, the foundation’s newsletter about thefts and recoveries” is also a main part of the foundations success. (Dudar) The use of this newsletter gives the public information about missing artwork. “IFAReports also provides news of recoveries, but it is the vanished pieces that use up the most ink and paper.” (Dudar) Although “originally founded as a consumer protection agency against art forgery”, IFAR has emerged into a main art theft prevention foundation.

“With a growing emphasis on due diligence when buying and selling art, the Art Loss Register of London is becoming an effective tool to combat fraud and recover lost and stolen pieces, users and providers of this service contend.” (Attrino) “The art loss register started in 1991 as a solution by the art and the insurance worlds to do something about the level of art theft, trade in stolen art and the lack of recoveries. The register created a database containing lists of stolen and missing art and antiques.” (Schillingford) This database allows law enforcements to be able to view art that has been reported either stolen or missing. This not only aids law enforcement, but museums, auction houses, and buyer/collectors.

“The Art Loss Register database holds numerous is losses looted from public and private collections between 1933 and 1945 and additional missing artworks for free.” (Schillingford)Art theft is a crime on the rise, but with the use of these foundations and the methods that are being used by museum security managers it is slowing declining. Art theft is something that because of system and human flaws will never be successfully prevented. It can however, be something that is so hard to do that a lack of interest will remain. The only way to successfully prevent art theft is to not own any at all.

Burrows, Robin. “Artful Protection from Down Under.” Museum Security. Feb. 1992.

Dudar, Helen. “Making a dent in the trafficking of stolen art.” Smithsonian. Sept. 1995. 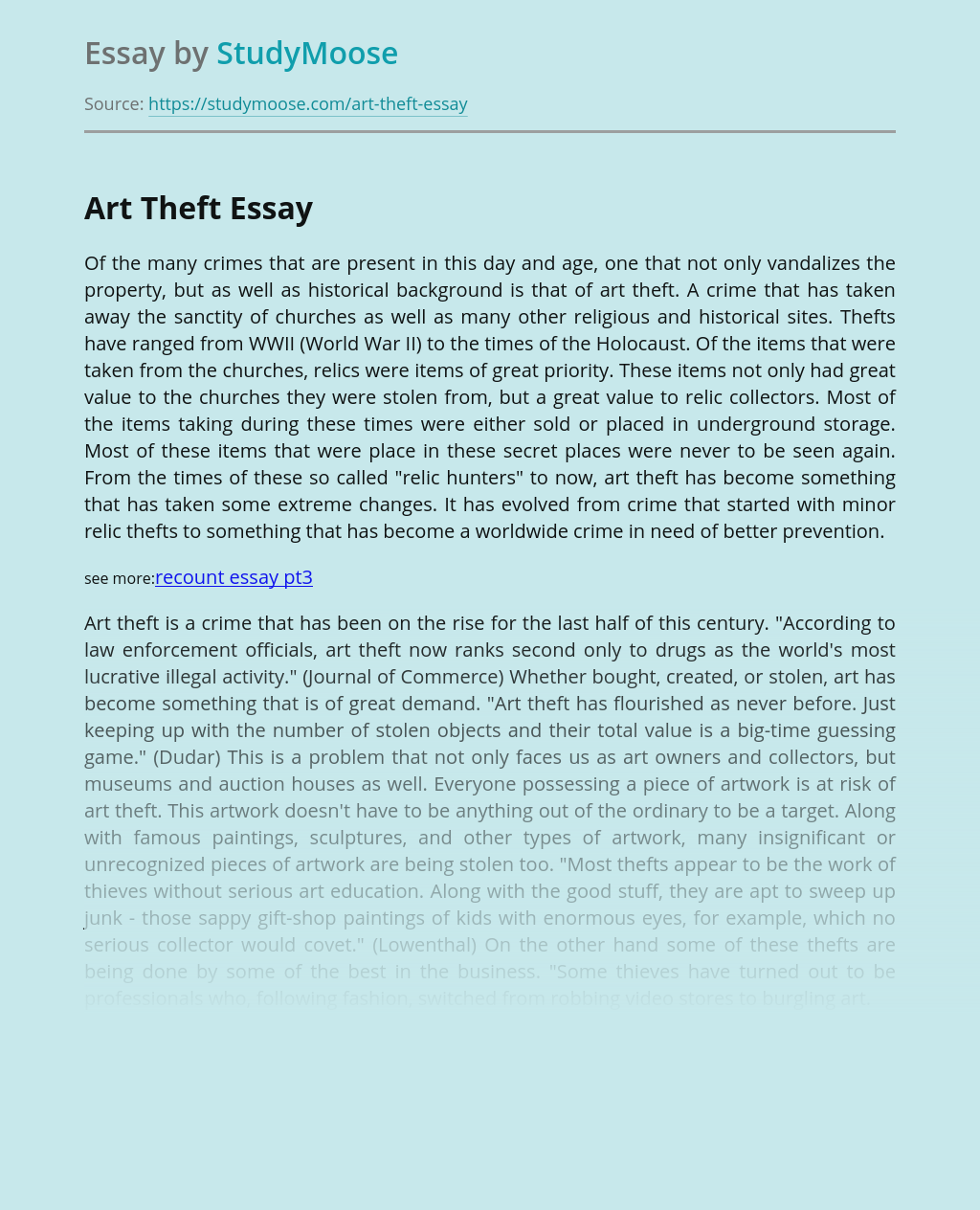 Turn in your highest-quality paper
Get a qualified writer to help you with
“ Art Theft ”
Get high-quality paper
Helping students since 2015
Stay Safe, Stay Original