Should graffiti be considered Art? One question that has been going around society for a very, very long time now. Did you know the argument about graffiti has been out there ever since caveman days? Anyway, probably many of you already have an answer in your head. Many people say graffiti is vandalism, but what actually is graffiti? Vandalism or art? In this essay, I will be listing all the reasons why graffiti is art.

A big part of society doesn’t know the difference between public art and graffiti/street art.

Don't use plagiarized sources. Get your custom essay on
“ Art or Vandalism: The Street Art Debate ”
Get custom paper
NEW! smart matching with writer

“What is public art” you might be asking yourself, well it is any work of art which is designed to be accessible to the public, from a public square to a wall inside a building. Don’t be embarrassed if you don’t know what the difference between the two is, to be fair there really isn’t much of a difference. For example, they are both made in the street and they are both written on walls.

So you must be thinking “what’s the difference then”. The difference is that graffiti/street art is considered rebellious in nature and illegal in practice, while public art is assigned by cities or property owners and is considered as cultural development and it’s socially acceptable. Examples of public art are Walter Scott’s quotes written around Waverley Station(Edinburgh). You probably already are familiar with some examples of graffiti written on places such as under walk tunnels or sides of railway lines.

People do not like going to parks or through streets that have graffiti on them, researches show. Researches also show, on places like that people associate graffiti with gangs, violence, and drugs. They think it is related to gangs which can lead to more serious crime. People just need to understand not all forms of graffiti are related to gangs and vandalism. Yes, it might be gang influenced but it does not always involve crime. Furthermore, you could argue that society just looks different at graffiti depending on its origins. For example often if they are done by poorer people, society is being really critical about it, whereas if graffiti is done by richer people society doesn’t criticize as much.

Each year people from all around the world travel to different places on Earth to see festivals which were organized specifically for graffiti artists so they can show off their skills and work. Actually, graffiti artists want people to see their work but what people do not see about graffiti is that it has a certain beauty to it, with its stunning colors, different styles, and powerful messages. Graffiti is a way for artists to express themselves. Don’t understand me wrong, writing your name on a wall is not a piece of art, a five-year-old can do that. The definition of art is the way people express their creativity and imagination in different ways, for example, painting or sculpturing.

Some people might have an opinion opposing mine because graffiti sometimes is used to mark or deface premises or other property without the owner’s permission. Yes, I do agree that I wouldn’t be pleased if I woke up and my house had graffiti that tagged certain social groups on its walls, but I would be more than pleased to see the abandoned building that’s on my way to school has had a makeover and it’s now covered in beautiful spray paintings. Yes, it does cost a lot to get a wall re-painted, yes it does cost taxpayers millions each year, yes graffiti painting can be a dangerous activity sometimes but is it really worth it hating on graffiti when you can just be amazed by and happy about abandoned buildings getting a makeover? 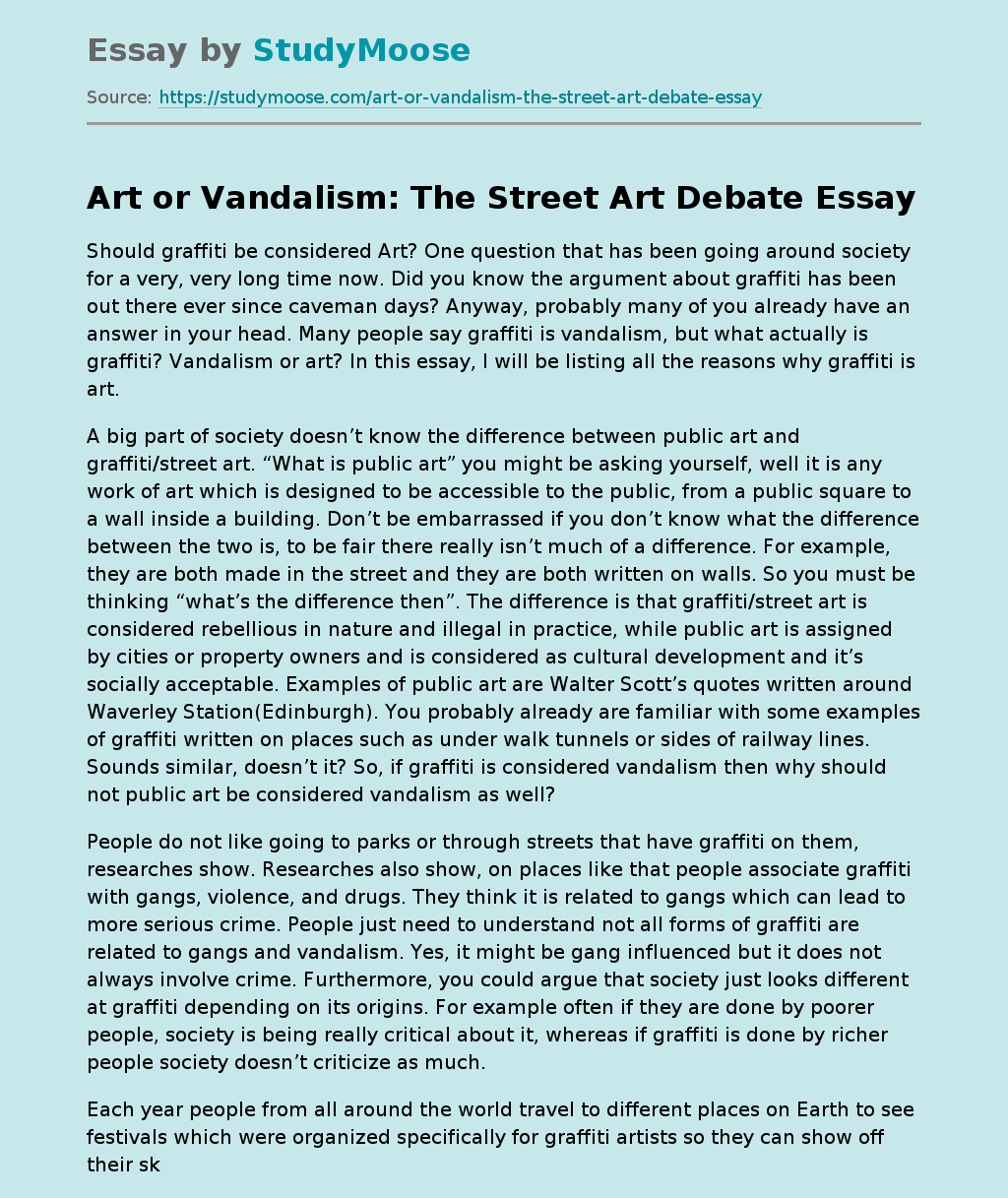