Of the three diagrams, which one best illustrates the idea of compositional unity?
B
In his painting The Flagellation, Italian artist Piero della Francesca created unity by concentrating on groups of figures in two different ares, _____ and ___.
Foreground…background
____ balance is achieved when both sides of a composition look exactly the same
Symmetrical
In Robert Rauschenberg’s Monogram, he used variety to energize his artwork and challenge his viewers. By combining different items it can be said that he:
All of the above
____ balance is achieved when two halves of a composition are not mirror images of each other
asymmetrical
In his work Six Persimmons, the thirteenth-century Chinese monk Muqi used different visual weights on each side of the composition.

asymmetrical
____ balance is achieved when all elements in a work of art are equidistant from a central point and repeat in a symmetrical way from side to side and top to bottom
radial
Creating visual weight and counterweight is part of a artist’s use of the element of ___ in creating a work of art.
balance
The three kinds of unity are:
Compositional, conceptual, and gestalt
Artist can use ___ to organize the elements in a work and draw our attention to areas of emphasis and focal points
All of the answers
In the Indian painting featuring the Mughal Emperor Babur in his garden, the garden is punctuated by a specific feature that points to the four cardinal directions. What is the element that is used to direct the viewers attention
line
in the Funeral of St. Bonaventure, the artist used to principle of ___ to create emphasis and focal point.
contrast
a focal point is that specific part of an area of emphasis to which the artist draws our eye. He or she can do so by using two types of line.
implied and actual
In the paint Landscape with the Fall of Icarus the artist intended to divert our attention so that we barely notice Icarus plunging to his doom; a fine example of
subordination
This is the specific part in an area of emphasis to which the viewer’s eye is draw
focal point
Andro Hiroshige oriented three ___ in his print “Riverside Bamboo Market, Kyobashi” in order to emphasize specific points in the work and to enliven the composition
shapes
Artemisia Gentileschi used directional line brilliantly in her painting Judith Decapitating Holferens to draw our attention to this point
Blood spurting from Holoferene’s neck
This feature of Pervian double-chambered vessel with mouse is a particularly strong focal point
the mouse’s eyes
By emphasizing the color field in the center of Tin Lizzie Green, the artist who painted it intended to focus the viewer’s attention on the work’s ___ space
negative
In ancient Egypt this part of the human body was used as a standard of measurement. six of these equaled a cubit
palm
This proportional system uses a ratio of 1:1.618
Golden section
The Greeks sought an ideal of beauty in the principle of proportion. To the Greeks, these proportions embodied the perfection of the ___
gods
Which Greek sculptor wrote a treatise (book) describing how to create a statue of a human being with ideal or perfect proportions
Polykleitos
The ancient Greek sculptor who created the bronze known as Poseidon used this part of the body as a standard unit for proportional measurement in the work
Head
The Swedish-born artist Claes Oldenburg uses this kind of scale in his sculptures to express admiration for the little things in everyday life
monumental
This type of scale is common in the relief sculpture of ancient Egypt, where it was used to indicate social importance
Hierarchical
Dorthea Tanning’s work Eine Klein Nachtmusk uses deliberately distorted scale to create an abnormal or ___ effect
Supernatural
The Flemish artist Jan van Eyck used hierarchical scale to communicate importance in his painting Madonna in a Church
Spiritual
In his figural portraits, Rober Lostutter uses this kind of scale to create an intimate viewing experience
small scale
In The School of Athens, Raphael has composed his individual figures so that the parts of each are harmonious in relation to each other and portray an idealized form. He has focused our attention on to Greek philosophers positioned in the center of the work with opposing gestures. They are ____ and ____.
Plato…Aristotle
The rhythmic movement of the cattle and the plowmen in Plowing in the Nivernais: The Dressing of the Vinces suggests struggle and the natural ebb and flow of nature by using ___ rhythm
irregular
If you were to create an artwork by throwing open cans of paint over shoulder onto a canvas behind you, this work would be an example of
randomness
Artichoke Halved is a photograph that uses this point of view to capture unique characteristics of a natural object
close-up
This art movement, of which Hans Arp was a member, valued randomness, absurdity, and nonsense over rational or orderly patterens
Dada
This American painter used small abstract motifs to create a huge self-portrait
Chuck Close
A design repeated as a unit in a patter in called a ___
Motif
In the painting The Blue Room, the artist uses three patterns that ___
contrast
In the painting The Third of May, 1808, this Spanish artist used alternating rhythm to contrast “good” and “bad”
Francisco Goya
Picasso’s Las Meninas is
abstract
Edward Hopper’s Nighthawks reflects the solemn mood of the USA at
its entry into World War II
Both biographical and historical analysis are important for understanding the meaning of Velazquez’s Las Meninas
True
In Audrey Flack’s Marilyn Monroe, the burning candle, the flower, and the hourglass are typical of a kind of symbolism in art that reminds us of death. This kind of symbolism is known as ___
Vanitas
A work that depicts people of objects in a way that makes them recognizable is called
representational
Jose de Rivera’s sculpture Infinity can be described as non-objective because its subject matter is
unrecognizable
An artwork can described as non-objective if its subject matter is
unrecognizable
Jean-Auguste- Dominique Ingres’s representational portrayal of the woman in Grande Odalisque is an example of what kind of analysis
Feminist
Name two interpretive methods of analysis
Iconographic analysis and Biographical analysis
The atmosphere of Edward Hopper’s Nighthawks, created by the lack of people on the street, the absence of streetlights, and the somber mood of the customers in the cafe, is one of
loneliness
Allan Houser’s work Reverie is
Abstract and representational 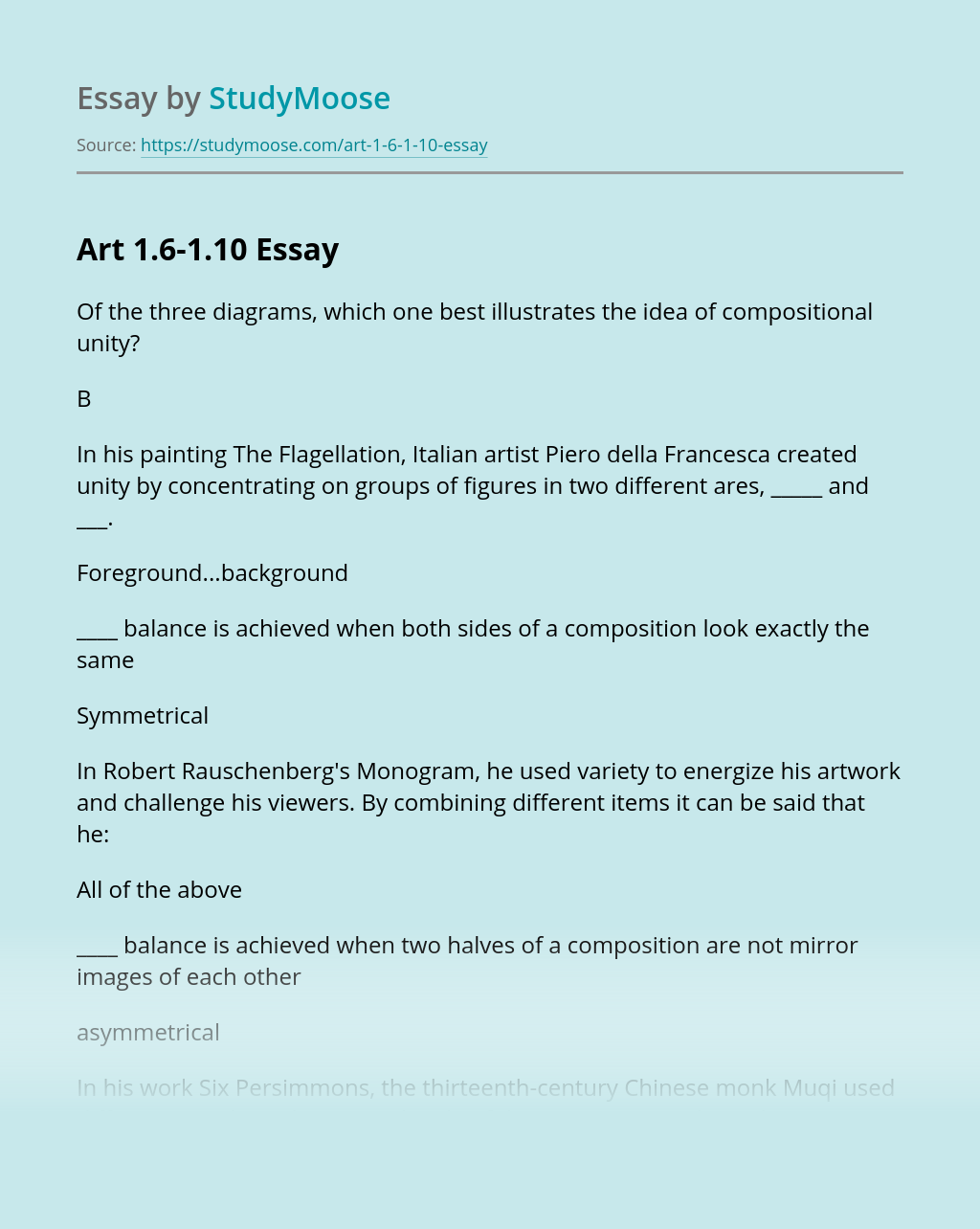 Advantages and Disadvantages of Artificial Intelligence

Human intelligence involves many skills such as problem solving, decision making, learning understanding and reflex actions. Many experts in AI have dreamt of creating machines that can imitate our human intelligence. This has led to many possibilities; however, the field of AI has to be understood from both sides of the coin. On the one... VIEW ESSAY

Renzo Piano is a famous architect renowned for his unique approach to design and his philosophy. He was born into a family of builders and he continued on the tradition of “making things” as he puts it, by designing some award winning & famous buildings, including the Georges Pompidou Centre in Paris, France, the San... VIEW ESSAY

History: Martha Wilmington, a 74-year-old woman with a history of rheumatic fever while in her twenties, presented to her physician with complaints of increasing shortness of breath (“dyspnea”) upon exertion. She also noted that the typical swelling she’s had in her ankles for years has started to get worse over the past two months, making... VIEW ESSAY

The names Erich Heckel and Die Brucke are inseparable in the world of art. It is not without a fair amount of controversy that this artistic movement is regarded though. Heckel, and others were more interested in the primitive form of art which they thought to be purer than the more modern realistic style that... VIEW ESSAY

William Morris was a poet, artist, manufacturer, and socialist during the mid to late 19th century. He was most active as a wallpaper and textile designer and later in his life a graphic designer. Morris was born March of 1834 in Walthamstow, which was near to London. He lived with his wealthy family near London... VIEW ESSAY