1. The case study indicates that the approach to match capacity to demand utilized by Arnold Palmer Hospital must be approach (a), leading demand with an incremental expansion. The reason for this is that it is evident that Arnold Palmer Hospital is attempting to acquire capacity to stay ahead of demand, or in other words by leading capacity, on account of the fact that the opening of the new 11-store hospital building will increase yearly birthing capacity to 16,000, which is far above the estimated 13,600 births expected during 2007, as shown by Table S7.

3. Furthermore, the fact that the hospital and Swanson in particular is choosing to follow a multi-stage approach in terms of the hospital’s expansion in which the top two “shell” floors will remain empty until a later time while the fourth-floor operating room can be doubled in size if necessary indicates that they are choosing to specifically follow an incremental approach. That is, the hospital is choosing to open the new hospital while leaving the top two floors empty, which will satisfy expected demand for a given amount of time until demand increases some more, at which point the top floors will be completed and the fourth-floor may be doubled.

2. Building a new 11-story hospital building with a capacity to accommodate 2,400 more births than is even projected for the next year (i.e. 2007) is undoubtedly a risky operation.

This is also not taking into consideration that the addition of the top two floors will add even a greater capacity on top of the 16,000 per year that is expected even without the use of those two floors. There are many changes that may occur which may negatively result in the hospital having an underutilized facility. For instance, Arnold Palmer Hospital holds a very high patient satisfaction at over 95% and patient satisfaction scores always fall in the top 10% of all U.S. hospitals surveyed. However, a large increase in capacity such as the 11-story hospital addition Arnold Palmer Hospital is planning to build may in some cases compromise quality. That is, taking on the additional burden of running and meeting the demand of such a large addition may make managing the hospital effectively more complex as well as meeting all the needs of the increased number of patients in a satisfactory manner (i.e. diseconomies of scale).

This may potentially lead to a decrease in the patient satisfaction rate that the hospital prides itself so strongly on, which may thus lead to a decrease in demand which results in an underutilized facility. This is mainly due to the fact that from the case study it can be assumed that a significant proportion of the hospital’s demand relies on the fact that it is able to maintain such a high patient satisfaction rate. If this is hurt in any way by the complexity of running a new hospital unit, then the forecasted demand may be hurt as well. Another potential risk that may arise in building a new 11-story 150 bed hospital addition aimed at increasing birthing capacity to 16,000 is a potential shortage of OBGYN’s. If there are not enough doctors available to accommodate the additional demand capacity, then of course the hospital may find itself with an underutilized facility.

Furthermore, apart from just the cost of building the expansion itself, the hospital must consider the cost of the technology required for the addition to function, and if this technology is not available at the site, the facility may be underutilized. Of course, there are also additional concerns involved such as the population growth in central Florida reaching a plateau or peak, or even dropping for whatever reason in the near future. The expansion is based entirely off the notion that population and thus demand will continue to grow significantly in the area in the coming years.

If this for whatever reason does not happen as planned, then the hospital may again find themselves with an underutilized facility. That is to say, the population in the area may for example be aging and thus birth rates may fall, etc. Also, they need to look at the economic situation in the area as well. By that I mean looking at whether young couples/families are continuing to move into the area? Are there enough job opportunities in the area that will fuel growth of this demographic group? All this may affect population growth and subsequently birth rates. 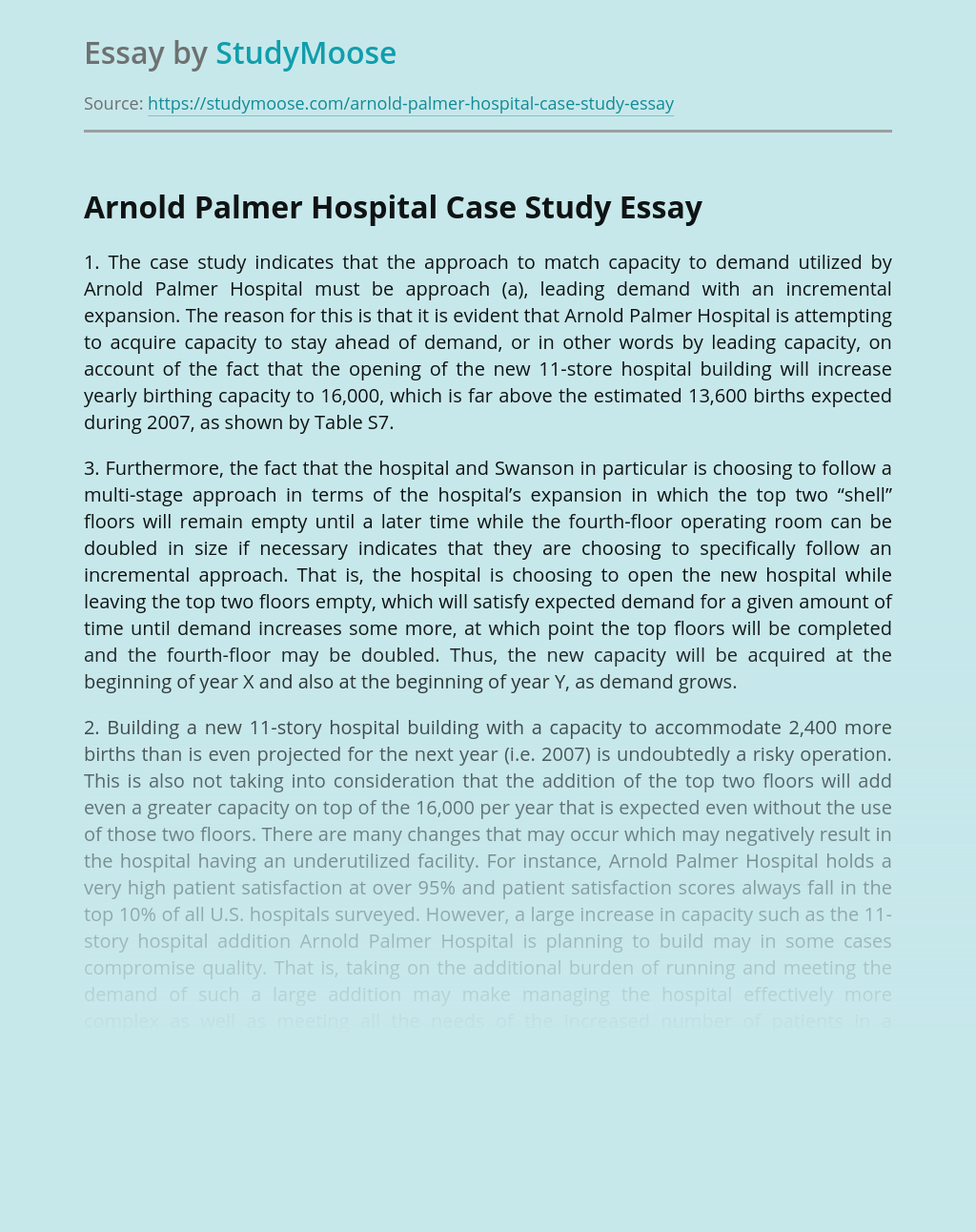