1.The author included the quote from Hitler as the epigraph because he wrote “Who does now remember the Armenians” before the question and Hitler’s quote answered it. The quote answers the question because only Hitler remembered the Armenians and did the same to the Jews. My ideas didn’t change after reading Forgotten Fire because I already knew the story about the Armenian Genocide.

2.Vahan couldn’t discuss his fear with his mother because first of all, he was too scared to say a word and he wasn’t confident enough to say anything.

Also he was imagining things in his mind of what might have happened to his father and maybe if he told his mother, he would burst out in tears. He didn’t also want to disturb his mother because his mother was very depressed when her husband left and it seemed like her heart wasn’t there. Also, her mother would have lied to him anyway and not tell him the truth for why the Turks took his father.

3.The attitude of the Armenian community changed in various ways. No one knew something was going to happen to them, so once everything started; everyone began to only care about themselves. Some people just didn’t want to go any longer and just wanted to be shot before getting tortured in any way. Also they were shocked of what the Turks had done and they started hating them. Every Turk they saw, they started to hate.

4.The Kenderian family was a very wealthy family and lived a great Armenian life.

5.I was aware of the Armenian Genocide before reading the book. The only ethnic war I know of before World War 11 was the Jewish Holocaust.

6.After the murder of Vahan’s brothers, he had a hard time. He didn’t feel like himself anymore and thought that there was no point of living any longer because he knew that the soldiers would come back and kill him also. He was in pain and couldn’t stand the fact that his brothers had died, he thought everything was imaginary. After that, he stood up more and became aggravated tat he was going to survive through everything.

7.After violent experiences on his journey to Constantinople, his behavior changed afterward. He witnessed many things so after a while, if he saw someone get shot or people begging for something, he did not care because it was normal to him already just because he seen it so many times. The graphic descriptions didn’t disturb my reading because I knew about the Armenian Genocide before I read the book and also I saw an Armenian movie which had more details so the description in the book didn’t seem so harsh.

8.Vahan reveals his spiritual doubt when all the time he prayed about someone or something he got no answer. For example he would always pray to find his family members and when he didn’t, he started to doubt praying. After that, he finally found out that God really exists and he answered as many of his prayers as he could.

9.Vahan knew that Selim Bey wasn’t a polite person but the way he treated him, his first impression of Selim Bey was surprising. Vahan actually “liked” Selim Bey and couldn’t believe he had done anything to harm the Armenians. Vahan discovers Selim Bey’s true nature when he sends him to his father’s house and doesn’t ever visit Vahan again. Selim Bey betrayed Vahan which showed he didn’t care about him.

10.What Vahan means when he says I would be free an would never be free is the it was unbelievable that he was free from everything now and didn’t have to worry about hiding from Turkish soldiers, but then he still didn’t fell free because he didn’t have his family and everything he once had which made him seem like he had something missing in himself. I don’t think there are countries that deny freedom to certain citizens based on their ethnicity.

12.Everyone in Vahan’s past gave him courage to contribution to freedom in many ways. Every time Vahan was in a dark room or some place he was not sure what he can do, he would close his eyes and imagine something that someone said or did from the past which helped him move on and do what the person once told him to do. Each person gave him courage because he would imagine something each person told him to do and then he would gain more courage and confidence with his journey.

13.The meaning of the tile Forgotten Fire is the death of all the Armenians that was forgotten by the Turks. 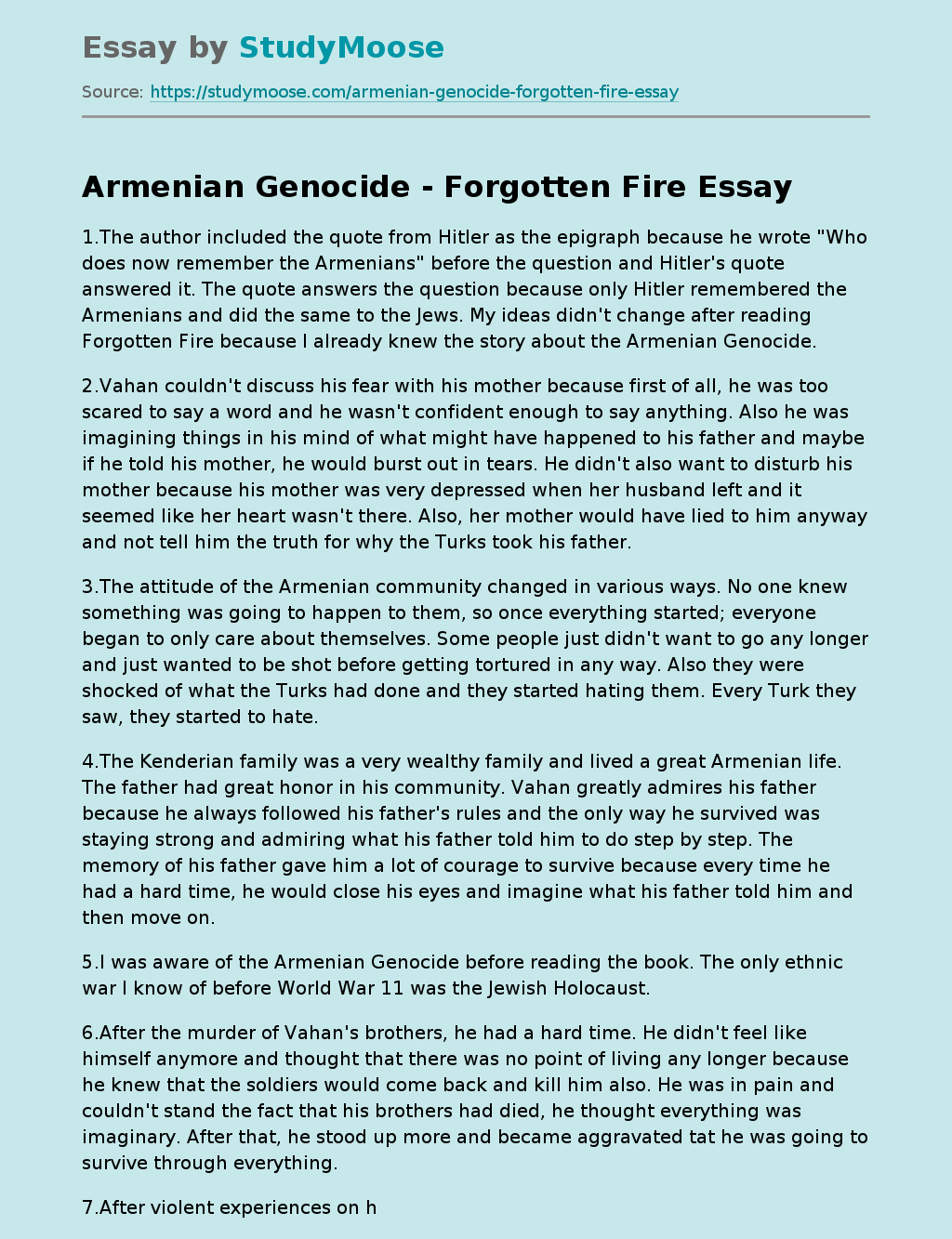