Essay On Aristotle Life And Happiness

A biography of the life of the Greek philosopher and scientist Aristotle.

ARISTOTLE’S LIFE Aristotle, Greek philosopher and scientist, is one of the most famous of ancient philosophers. He was born in Stagira, Greece to a physician to the royal court. When he became eighteen, Aristotle entered Plato’s School in Athens and remained at this academy for twenty years, as a student and then as a teacher. He was recognized as the Academy’s brightest and was given the title of “The Intelligence of the School”.

Don't use plagiarized sources. Get your custom essay on
“ Essay On Aristotle Life And Happiness ”
Get custom paper
NEW! smart matching with writer

When Plato died in 347 BC, Aristotle left Athens and joined a group of disciples of Plato, with his friend Hermias. Hermias became ruler of a city called Assos, a city in Asia Minor. Aristotle married Hermias’ adopted daughter, Pythias. In 343 or 342 BC, Philip II, king of Macedonia, told Aristotle to supervise the education of his son, Alexander (later known as “Alexander the Great”). He taught him until 336 BC, when Alexander became the ruler of Macedonia.

Alexander the Great later became the ruler of all Greece, and over threw the Persian Empire. In 334 BC, Aristotle returned to Athens and started his own school, the Lyceum. Because he taught while walking around, his students were called the Peripatetic students, meaning “walking” or “strolling”. When Alexander died in 323 BC, Aristotle was charged with impiety (lack of reverence to the gods) by the Athenians. The Athenians probably did this because they resented Lu-2 Aristotle’s friendship with Alexander, the man who conquered them. Aristotle fled to Euboea.

He died there the next year. ETHICS Aristotle believed that there was no way to make an accurate resolution of human decisions since an individual had his or her own choice. He did, however, say that all human beings want “happiness” and that there are many ways in which this goal can be achieved. He also believed that “full excellence” can only be reached by the mature male adult of the upper class, not by women, or children, or barbarians (non-Greeks), or manual workers.

Essay On Aristotle Life And Happiness. (2016, Jun 01). Retrieved from http://studymoose.com/aristotle-2-new-essay 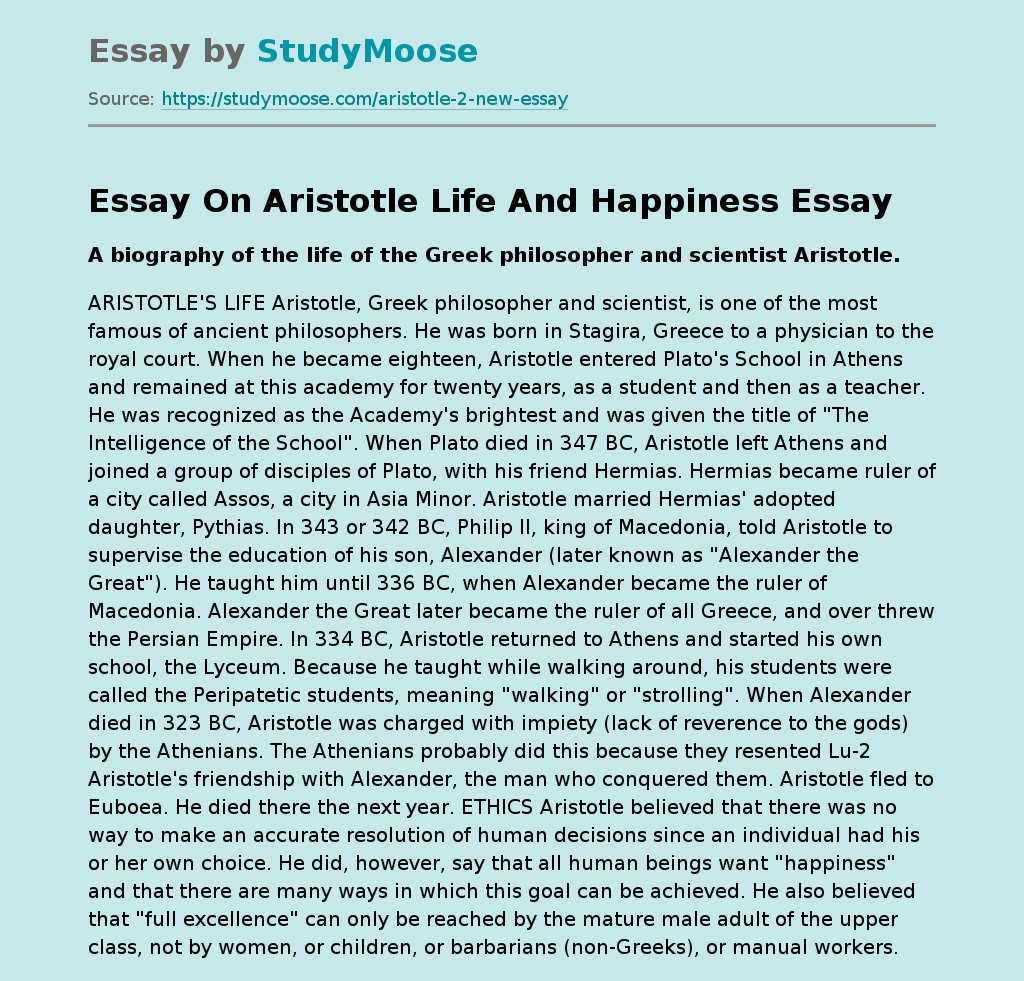