Arguments for and Against Keeping Animals in Zoos

Don't use plagiarized sources. Get your custom essay on
“ Arguments for and Against Keeping Animals in Zoos ”
Get custom paper
NEW! smart matching with writer

* By bringing pеople and animals together, zoos educate the public and foster an appreciation of the animals. This exposure and education motivates people to protect the animals. * Zoos save endangered species by bringing them into a safe environment, where they are protected from poachers, habitat loss, starvation and predators.

* Many zoos also have breeding programs for endangered species. In the wild, these individuals might have trouble finding mates and breeding. * Reputable zoos are accredited by the Association of Zoos and Aquariums and are held to high standards for the treatment of the animals. According to the AZA, accreditation means, “official recognition and approval of a zoo or aquarium by a group of experts.” * A good zoo provides an enriched habitat in which the animals are never bored, are well cared-for, and have plenty of space.

* Zoos are a tradition, and a visit to a zoo is a wholesome, family activity. * Seeing an animal in person is a much more personal and more memorable experience than seeing that animal in a nature documentary. * Some would argue that humans have little, if any duty to non-animals because humans are more important, and if keeping animals in zoos serves any educational or entertainment purposes, we can ethically do it. * Zoos help rehabilitate wildlife and take in exotic pets that people no longer want or are no longer able to care for. * Both accredited and unaccredited animal exhibitors are regulated by the federal Animal Welfare Act, which establishes standards for care. Arguments Against Zoos

* From an animal rights standpoint, we do not have a right to breed, capture and confine other animals, even if they are endangered. Being a member of an endangered species doesn’t mean the individual animals have fewer rights. * Animals in captivity suffer from stress, boredom and confinement. Intergenerational bonds are broken when individuals get sold or traded to other zoos, and no pen or even drive-through safari can compare to the freedom of the wild. * Baby animals bring in visitors and money, but this incentive to breed new baby animals leads to overpopulation. Surplus animals are sold not only to other zoos, but also to circuses, canned hunting facilities, and even for slaughter. * The vast majority of captive breeding programs do not release animals back into the wild. The offspring are forever part of the chain of zoos, circuses, petting zoos, and exotic pet trade that buy, sell and barter animals among themselves and exploit animals. Ned the Asian elephant was born at an accredited zoo, but later confiscated from an abusive circus trainer and finally sent to a sanctuary.

* Removing individuals from the wild will further endanger the wild population because the remaining individuals will be less genetically diverse and will have more difficulty finding mates. * If people want to see wild animals in real life, they can observe wildlife in the wild or visit a sanctuary. A true sanctuary does not buy, sell, or breed animals, but takes in unwanted exotic pets, surplus animals from zoos or injured wildlife that can no longer survive in the wild. * An individual’s rights should not be infringed for the sake of the species. A species is not asentient being and therefore has no rights. * If zoos are teaching children anything, it’s that imprisoning animals for our own entertainment is acceptable. * At least one study has shown that elephants kept in zoos do not live as long as elephants in the wild.

* The federal Animal Welfare Act establishes only the most minimal standards for cage size, shelter, health care, ventilation, fencing, food and water. For example, enclosures must provide “sufficient space to allow each animal to make normal postural and social adjustments with adequate freedom of movement. Inadequate space may be indicated by evidence of malnutrition, poor condition, debility, stress, or abnormal behavior patterns.” Violations often result in a slap on the wrist and the exhibitor is given a deadline to correct the violation. Even a long history of inadequate care and AWA violations, such as the history of Tony the Truck Stop Tiger, will not free the animals.

* Sanctuaries also rehabilitate wildlife and take in unwanted exotic pets, without breeding, buying and selling animals like zoos do. * Animals sometimes escape their enclosures, endangering themselves as well as people. There have even been incidents of zoo animals eating other zoo animals. In the case of zoos, both sides will argue that their side saves animals. Zoo proponents do not believe in animal rights, so many of the arguments against zoos are not persuasive to them, while other arguments may seem to apply only to inferior zoos, such as roadside zoos and petting zoos.

Arguments for and Against Keeping Animals in Zoos. (2016, Nov 02). Retrieved from http://studymoose.com/arguments-for-and-against-keeping-animals-in-zoos-essay 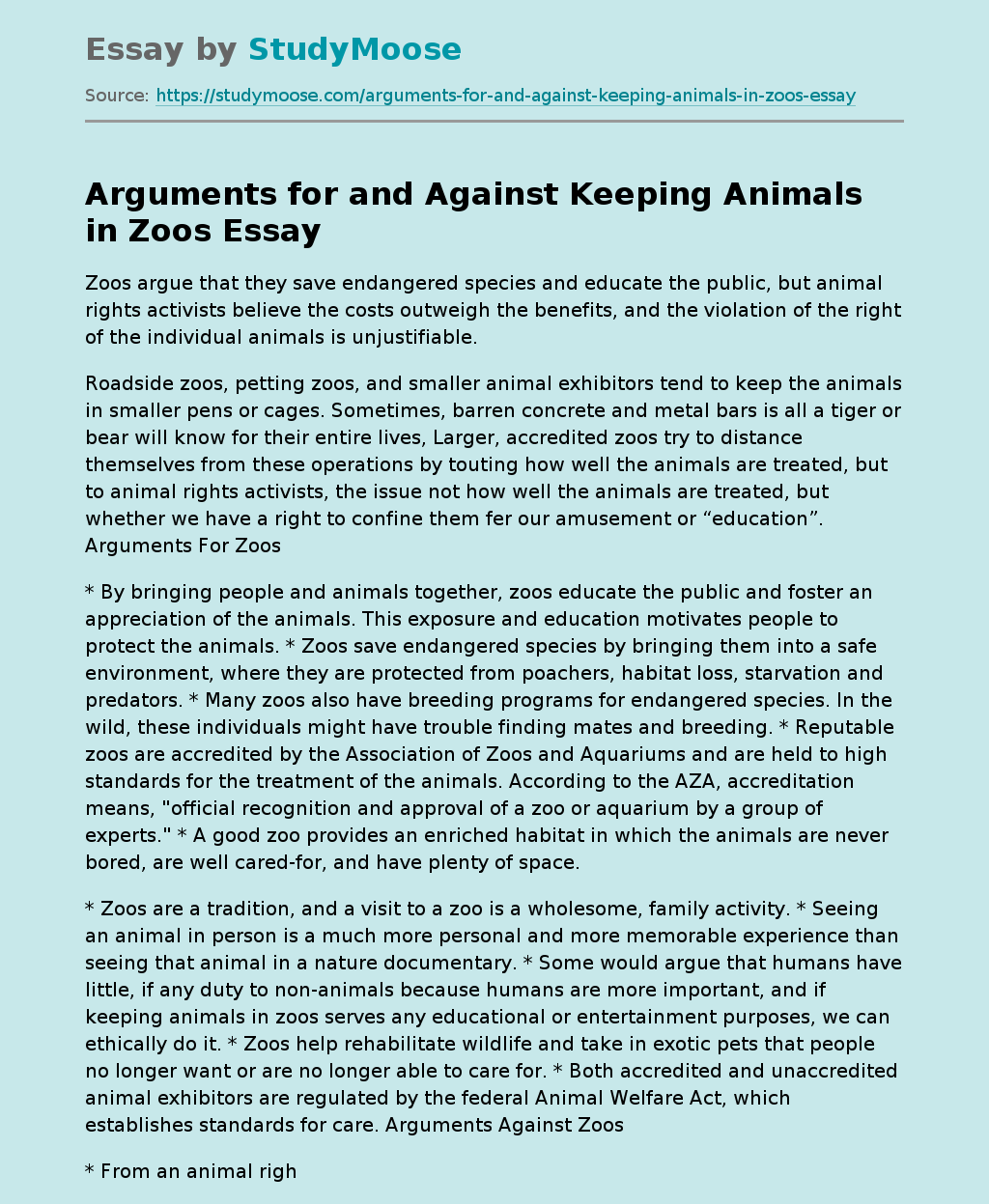