Just imagine your child was diagnosed of having autism. The realization of your child perhaps being autistic may be lurid. You now know that your child will be found with many challenges, and may have a severe difficulty making sense of the world. Autism is an illness that can affect your communication, socialization, intelligence, and you may act in many unusual behaviors. To try to help an autistic child is being very courageous. Having a child, who is autistic, will be a struggle throughout both of your lives.

Don't use plagiarized sources. Get your custom essay on
“ Arguments: Autism-Speaks ”
Get custom paper
NEW! smart matching with writer

There’s one charity that has supported and has raised a lot of money for research, families, and hope for a cure.

Autism is disorder that many children and adults struggle with but with the help of Bob and Suzanne Wright, families have grown to help their sibling with Autism strive and create a better way of life. Bob and Suzanna Wright, grandparents of a child with autism, founded autism Speaks in February 2005.

Their longtime friend Bernie Marcus donated $25 million to help financially launch the organization. Since then, Autism Speaks has grown into the world’s leading autism science and advocacy organization, dedicated to funding research into the causes, prevention, treatments and a cure for autism; increasing awareness of autism spectrum disorders; and advocating for the needs of individuals with autism and their families. “We are proud of what we’ve been able to accomplish and look forward to continued successes in the years ahead.”- Bob Wright.

Autism is a lifelong diagnosis.

Once diagnosed, there is no option for that individual to “grow” out the disorder. With early intervention symptoms can decrease rapidly. Even “high functioning” children with autism can be challenging for parents. “Low functioning” autism can be overwhelming to the entire family. The diagnosis of autism does not dictate a specific placement. Autism may occur by itself or in association with other disabilities. Educational placement decisions must be based on the assessed strengths and weaknesses of the student and educational needs rather than on reactions to the label of autism. Students with autism may be served in a variety of educational settings. Since 1992 to present day, Autism has increased to U.S children, aged 6-22, nearly 10 percent. So far, we’ve watched it grow to 45% to 530%, cumulative growth.

There is now a lot of research being done by genetics, DNA, and vaccines for autism. Around the world, scientists are trying to find the causes of autism, to try to invent a vaccine to cure autism. They are trying to invent a vaccine to cure or prevent autism. Genetics is a different story. Researchers are started to pain a picture by how the chromosomes might be getting altered or mutated for the birth of the infant. Further discoveries could lead to something called a gene test for autism. This would help only parents and families, but would also accelerate the pace of research for autism. There s not much about DNA, Genetics, or Vaccines known to cure or prevent autism or how it is caused in many children. But, researches and scientists, I believe, in the next couple of years will find out.

Autism-speaks has raised money for individuals, families, corporations, and foundations – that combined contributed in excess of $50 million in 2010. People should care about this disease that has infect many young boys and girls because it is a growing disease that has no cure and many young boys and girls are being diagnose everyday. This a untreatable disease. In conclusion, researchers and scientists are dedicated to finding the reason and causes behind autism.

They are always trying to transcend their knowledge in the medical world, to try to help these autistic children. New things are being discovered daily. Learning about the subject remains a continuous process. In the future, there will be many new therapies, medications, and alternative medications and treatments hopefully in the next couple of years to help your child. Parents are really the best teacher for their child. Autism has been diagnosed to many children in the last year. Scientists feel there has to be a reason why this illness occurs, especially in infants. It might take months, years, or a century. But someday we will be able to overcome the autistic disorder. So most of all DONATE!! 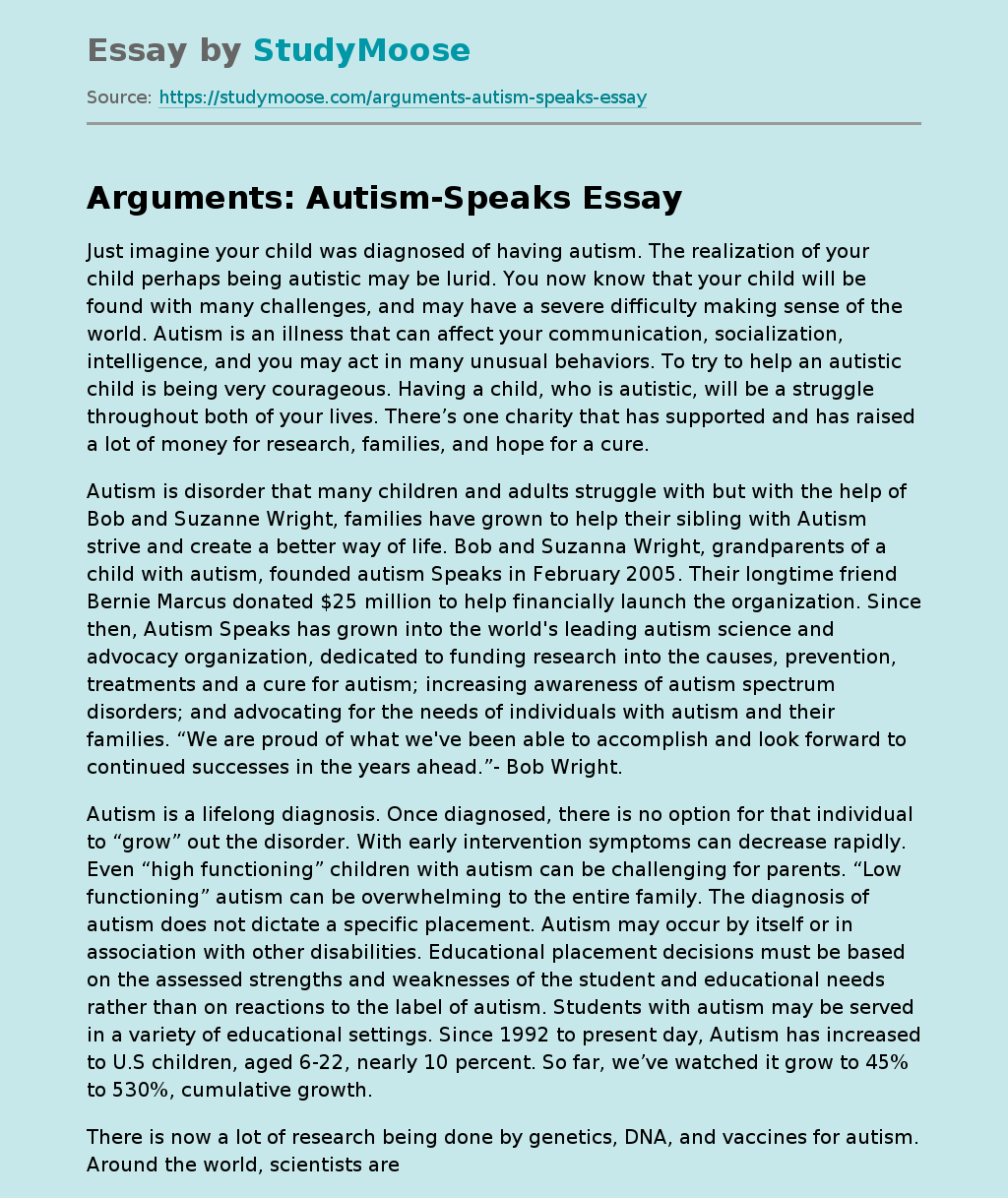