Argumentative Essay: Should Organs Be Sold or Donated

For over centuries mankind have been suffering from organ failure. Even since before B.C., the organ transplant is widespread (History.com Staff, 2012). As a result of the improvements of this procedure to be more safer and ubiquitous, nowadays there are less patients with transplant rejection. It is a known fact that people are more likely to need a transplant than donating bodily parts. The British Government highlights an average of 18 people die each day waiting for transplants that cannot take place because of the organ shortage.

Don't use plagiarized sources.
Get Your Custom Essay on Argumentative Essay: Should Organs Be Sold or Donated Just from $13,9/Page

Unfortunately, this number is increasing (Clark and Clark, 2013). 90% of the UK citizens believe in organ donation but only 30% of this number had actually taken action by registering for organ donation (Clark and Clark, 2013). It is proven that in general, the system in most nations fails to decrease the number of people who are on the waiting list, suffering each day.

Therefore, the government should take precautions in trying new developments in order to change this situation.

Currently, there is a debate on whether organs should be donated or legalizing organ selling. This essay would give a close look between the pros and cons of both sides, showing that a well regulated organ trade might work more efficiently than the other. All of the religions support living or deceased organ donation and even sometimes encourage people while some of them leaves the decision to individuals (NHS Blood and Transport, 2005). The reasons for most religions to accept the idea of organ donation are:

1) it will help the recipient with positive assurance

2) it does not cause damage to the donor

3) the donor can donate the organ or tissue willingly and without commercial profit. (Budiani and Shibly, 2006).

According to these reasons, a compromise can be seen with some ethical compensations for donation in order to find a benefit for the patient. Pope John Paul II indicates ”buying and selling human organs violates the dignity if the human.” (Friedman and Friedman, 2006). When it has been looked closely in more patients interest, it can be seen a support has been given to donation; however, because of the moral issue of giving a price to human body, the same support cannot be given for legalizing the trade and finding a matching donor for people in a shorter period of time. Despite the fact that there is a significant increase in organ donors, the number of people are on the list is rising with a bigger proportion which indicates that a patient on the waiting list will wait longer than it used to be (Cohen, 2006). For a person who is fighting a problem with malfunctioning an organ, every second is important. These people are constantly in pain and every passing second reduces their chances (Friedman and Friedman, 2006)… Every religion is against leaving people in misery for such a long time while the pain can be eased. Selling organs would take less time to find a compatible donor and patients would spend less time in misery.

For example, patients with kidney failure are suffering everyday while they are trying to live with dialysis. It causes not only physical and psychological pain but also economical obstacles (Peers, 2007). The thought of people with financial means further exploiting underprivileged people and leaving them suffering is rather unethical. It brings out the possibility of poor man can experience injustice in the future due to lack of organs with a chance of not gaining enough money they predicted they would. Certain patients may suffer from fatigue and other debilitating symptoms associated with patients with only one functioning kidney. This means people’s health would be in danger for a minor benefit (Ang, 2007). Even though this might cause a problem in the future for the people who sell their bodily parts, the black markets are still currently available. The same complication might come up to the surface although it is illegal and it has been highly regulated (Scheve,2008).

It is almost impossible to fully exterminate this black marketing but making it legal and giving the control of this trade to licensed professionals to evaluate donor-patient compatibility will help taking the organs and tissues out without any safety risk for the donor (Peers, 2012). It is an undeniable fact that if there is a market, the majority would want to profit while saving someone else’s life. However, the waiting list will not disappear but according to the predictions, it will surely reduce the number of people on the list. Additionally making this as a legal trade, it would prevent desperate patients from being cheated or from paying more money than they might have to when possessing from the black market (Peers, 2012). Iran proves these provisions. Even though it’s system have been criticised by many experts, their system works under the state’s regulation and non-profit organisations as CASKP and the Charity Foundation for Special Diseases which facilitate the process by helping the trade and are checking the eligibility as well as ensuring a fair commerce (Dehghan, 2012). Many will protest that an organ market will lead to exploitation and unfair advantages for the rich and powerful. People are only considering the benefits of rich people would get. But these are the characteristics of the current illicit organ trade (Gregory, 2011).

Living people can donate part of the lung, liver, intestines, or pancreas. Even though there is some financial pressure on people who wants to sell their organs, in the end it is a choice which has been given by free will. It would improve the financial stability of many. The wealthy would not be the only ones benefitting (Libertarian Jew,2013). To conclude, due to the length of this essay only major aspects of both sides can be considered. Donation would be more ethical and fair compared to selling but sometimes in order to save a patient’s life only medical ethics can be fallowed. During this essay, the ethical issues which refuses the legalization of trade market was actually due to religious beliefs. The medical ethics would be only giving the best treatment and health care to the general public. Selling would also decrease the poverty and the misery of donor-recipient respectively. If it is controlled a trading market might give benefits to both sides.

Budiani, D. Shibly, O. (October 2006) Islam, Organ Transplants, and Organs Trafficking in the Muslim World: Paving a Path for Solutions, Retrieved from: cofs.org/home/wp-content/uploads/2012/06/Budiani_and_Shibley.doc [Accessed at 1 April 2014] Clark, M. Clark, T. (13 June 2013) Selling Your Organs: Should it be Legal? Do You Own Yourself?, Retrieved from: http://www.forbes.com/sites/marciaclark/2013/06/13/selling-your-organs-should-it-be-legal-do-you-own-yourself/ [Accessed at 2 March 2014]

Scheve, T. (7 May 2008) How Organ Donation Works, Retrieved from: http://health.howstuffworks.com/medicine/modern-treatments/organ-donation.htm [Accessed at 28 March 2014]

Argumentative Essay: Should Organs Be Sold or Donated. (2016, Mar 16). Retrieved from https://studymoose.com/argumentative-essay-should-organs-be-sold-or-donated-essay 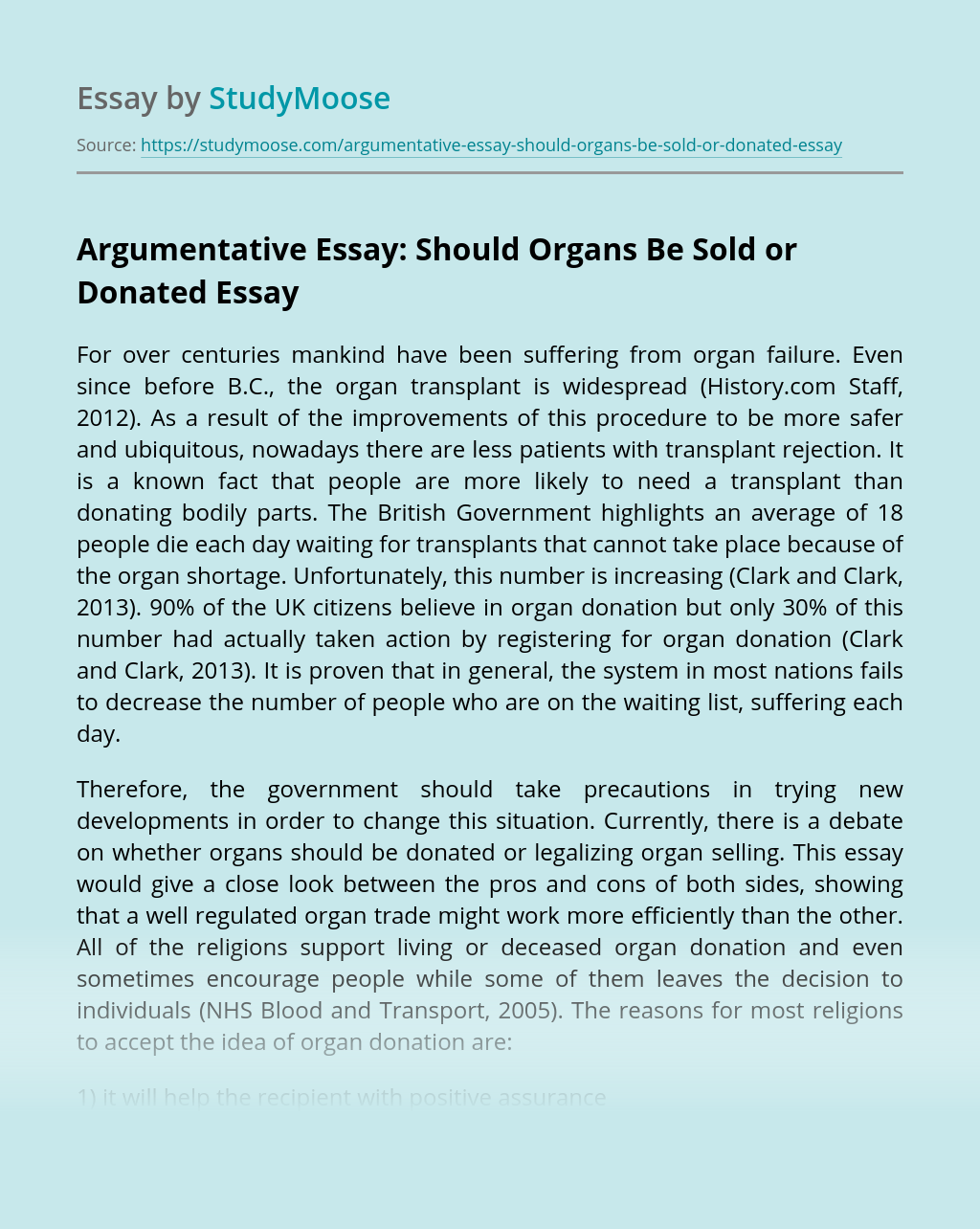 Move and Position Individuals in Accordance

Anatomy and Physiology of Human Pelvis

The pelvis is a large semicircular bone complex that forms the base on which the torso and upper body are positioned. The pelvis, which is a rigid and inflexible portion of the skeleton, is built to provide a foundation of the movement of other parts of the anatomy, particularly the back and the legs. The...

Get Essay
Has our society become excessively materialistic - SAT essay

Though it cannot be denied that modern society is profoundly materialistic, there is nothing inherently wrong with a society that values the production and consumption of material goods. Ample historical evidence suggests that societies that devalue capital wealth and material gain will be unstable and short-lived. Materialism – whatever value we place upon it –...

Argumentative Essay: Should Organs Be Sold or Donated

For over centuries mankind have been suffering from organ failure. Even since before B.C., the organ transplant is widespread (History.com Staff, 2012). As a result of the improvements of this procedure to be more safer and ubiquitous, nowadays there are less patients with transplant rejection. It is a known fact that people are more likely...

How sensitive is skin to touch? The receptors for the sense of touch are scattered over the surface of your entire body, however those receptors are more closely grouped together in certain parts of your body. In this activity you will investigate the distribution and sensitivity of the touch receptors in the human body. Procedure...