Argumentative Essay on Prohibition of Hazing

Hazing in American Fraternities should be illegal and should incur strict penalties. Society is ignorant to the severity of hazing within American fraternities. “Many of the rites of passage, those rituals of growing up… are in the form of such comic, practical joke affairs[,] which we ignore [believing that] they possess no deeper significance… For in them we ritualize and dramatize attitudes which contradict and often embarrass the sacred values which we proclaim through our solemn ceremonies”. (On Initiations Rites and Power)

Admittedly, hazing teaches new recruits their place in the fraternity.

However, hazing also suppresses freedoms and participation of a new member within the fraternity. In addition, hazing and victimizing members can lead to mistrust and apathy, which often ignites conflicting views, arguments, and violent altercations. On the other hand, other activities, for instance sporting events and on-campus activities, are suitable alternatives to hazing that are more effective in earning trust and respect between fraternity members. (UMich)

Some believe that hazing filters out members who are not willing to make serious commitments to fraternities, However; it also intimidates potential recruits.

Since the peak of fraternity membership, about 400 000 undergraduates in 1990, fraternity membership is declining by as much as 30 percent in the past two decades. (Psiu) Furthermore, a non-hazing fraternity finds that American students are reluctant to join a fraternity as “fewer students now [are willing] to [spend] hundreds of dollars… to be part of a system that has a reputation for physically abusing its pledges” (Psiu). In the end, hazing is abusive, hazing is humiliating, hazing is intimidating.

(Anaphora) As a result, hazing, abusive and intimidating, is discouraging underclassmen from joining fraternities. (Interrupted movement)

One could argue that hazing is acceptable because it is a time-honoured tradition in American fraternities. Although dismissing hazing as tradition would be a valid reason in the past, each year hazing practices become increasingly malicious and dangerous. Presently, hazing rituals involve binge drinking, physical abuse and kidnapping instead of the traditional rituals such as reciting the Greek alphabet, doing push-ups, or taking a bite out of a raw onion. (USAToday) (Antithesis). In summary, the risks hazing bears are now too great to dismiss simply as “tradition”.

Most importantly, hazing is extremely harmful to participants. Consequently, 71% of hazed victims suffer injuries, emotional scarring, or both. (UMich) These victims are subjects to physical abuse, resulting in; heavy bruising, broken bones, failing organs, and in the most severe cases, death. (Climax) Likewise, physical beatings and binge drinking are the primary causes for the 104 recorded hazing related deaths in American fraternities. (NYTimes) In addition, hazing – an abusive form of bullying – also leaves victims with many emotional scars such as low self-esteem, depression, and suicidal thoughts. (UMich) (Epizeuxis) Furthermore, hazing can trigger traumatic memories in victims. With the hazardous risk of physical and emotional trauma, the negative effects of hazing outweigh any improbable benefits. (Deductive reasoning)

In conclusion, hazing, and its associated consequences, are not justifiable by any excuse. Hazing is an act of violence and cruelty that American government officials must condemn and minimize through legislation. Nevertheless, hazing is destroying the lives of fraternity pledges across the United States, making grief-stricken national headlines each year.

Argumentative Essay on Prohibition of Hazing. (2016, Sep 26). Retrieved from http://studymoose.com/argumentative-essay-on-prohibition-of-hazing-essay 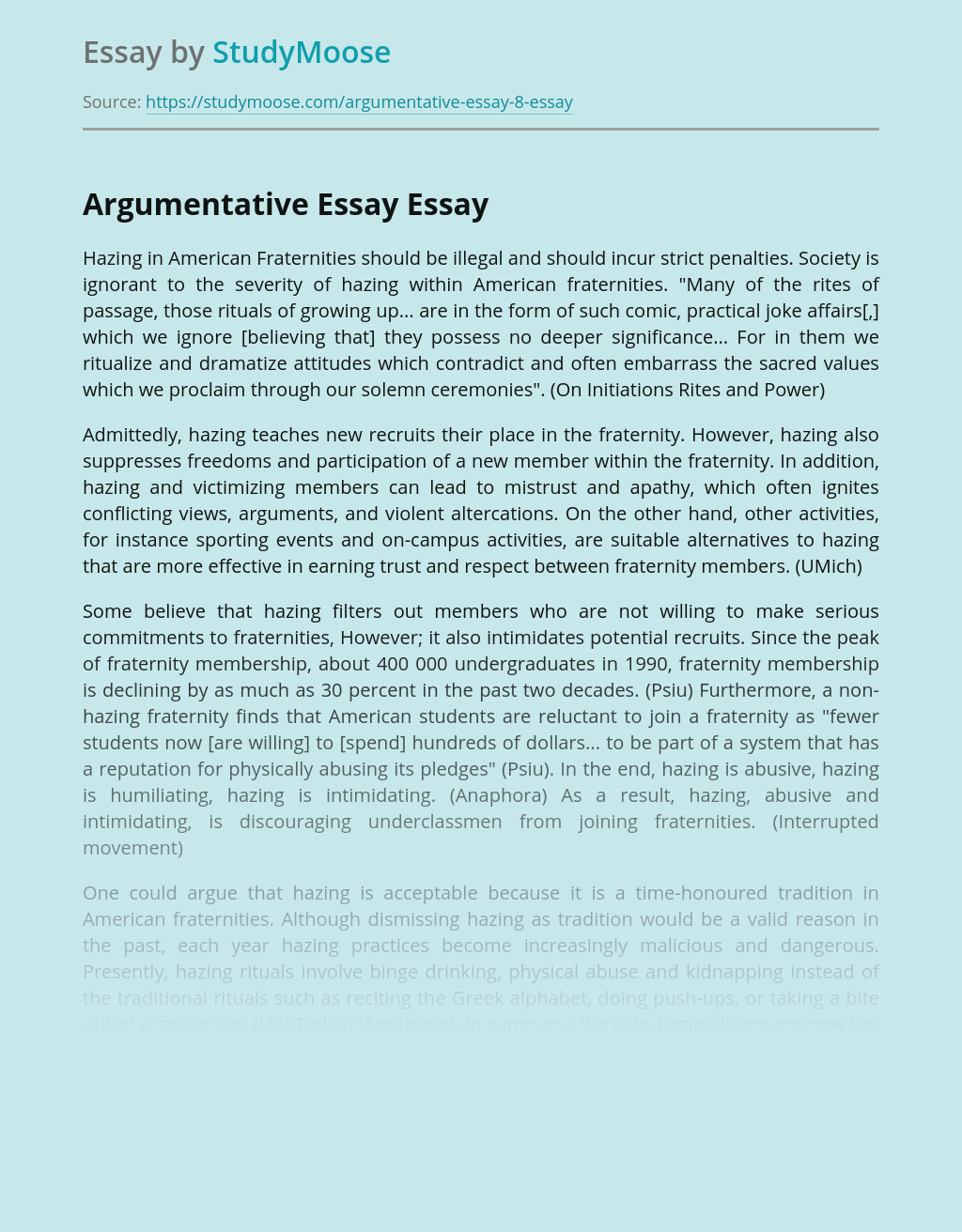 Don’t waste time
Get a verified writer to help you with Argumentative Essay on Prohibition of Hazing
Hire verified writer
$35.80 for a 2-page paper
Stay Safe, Stay Original