In the article “Why Animals Deserve Legal Rights”, Author Steven M. Wise argues in favor of animal rights based on the premise that all animals are autonomous. Furthermore he states that the term ‘rights’ has been widely debated and is arguably not affordable to all humans. Wise research indicates that rights are widely believed to be based on autonomy. And Wise does not believe we have an accurate grasp on the term ‘autonomy’. He shows that evidence does not illustrate all humans as ‘autonomous’.

Don't use plagiarized sources. Get your custom essay on
“ Argumentative Essay on Animal Rights ”
Get custom paper
NEW! smart matching with writer

Steven Wise cites evidence that Animals are indeed autonomous in at least some cases. He includes and example of a gorilla who displays more cognitive skill than a two year old human. Wise shows distaste for the ancient and presiding understanding of animals as “things, nonhuman animals have been invisible to civil law since its inception.” (Spatt 195) He cites Roman jurist Hermogenianus as saying, “All law, was established for men’s sake.” (Spatt 195)

He displays a disagreement when he notes, “Unfortunately for animals, many people have believed that they were put on earth for human use and lack autonomy.

” (Spatt 195) Wise also illustrates a few of the foolish laws we have done away with as our wisdom has increased. Wise argues, “Once the law assumed that witches existed and that mute people lacked intelligence. Now it is illegal to burn someone for witchcraft, and the mute have the same rights as anyone else.”(Spatt 196) Wise believes we should change the laws based on our new scientific findings regarding animals.

Wise infers that if not all humans can be granted rights, that rights should not be granted to only humans, but to a more broad audience based on a new criteria. Wise feels that animals are as autonomous as humans, and should be granted the rights of such a being. Wise seems to be motivated by compassion, and a righteous anger toward the mistreatment of animals. This is understandable. He wants people to see them as more than just tools, toys, or food. He seems to imply that animals are conscious and autonomous. He believes our new era of scientific understanding should facilitate a different legal perspective on animals.

I sympathize with Stephen Wise’s concern for animals, however it is simply not practical to direct the same amount of attention to animals as humans. If we gave animals human rights, it seems we would no longer be able eat them. This would create a famine and/or all out social rebellion. Animal research is also leading us to new new medical understandings that are crucial. At what cost do we stop all animal research? Even if that were not the case, would killing an animal count as murder? I’m not sure that Wise intended this degree of severity. However, to say that a human can not hunt for food is to take away a crucial aspect of our development as humans. This is how we survive. But if we look at many Native American practices, we will find that they respect and honor the spirit of each animal. I feel this is appropriate. I also feel it is inappropriate to stuff animals into a warehouse to live. This is fueled by greed. But we can not stop every injustice, and we must eat. Human beings are ultimately fragile. They must eat and drink water each day. Giving animals human rights in unpractical.

However we should, and do in many cases, treat animals fairly and with respect. It almost feels as if Stephen Wise forgot that we DO indeed have laws in many countries that protect animals. We have enforcement agents all over the country that protect our animalss. The inability to feel compassion for animals I believe is an inadequacy in the empathy department, but we also can not obsess over our anguish for animals. In the wild there is cruelty all day, and every day. It has been the pattern since animals first took a breath and got hungry. The animal world is a beautiful yet brutal place. We as humans exist there as well. Although some of us remain relatively unaware of this reality.

The argument that human rights don’t even apply to all humans, supports the debate that animals do not necessarily deserve human rights. (Spatt 195) Humans that throw feces and hurt other human beings are not given rights, they are locked up and stripped of rights. Animals can arguably fall into this category. Animals can not enter into our dialogue of language to make the commitments that humans make when they become part of a society. Meaning that when you are in a society, you are expected to behave a certain way. If you do not you have broken this social contract and are not given rights by other people. Animals are incapable of understanding this, and therefore can not enter our contract which allows one rights.

Argumentative Essay on Animal Rights. (2016, May 07). Retrieved from http://studymoose.com/argumentative-essay-on-animal-rights-essay 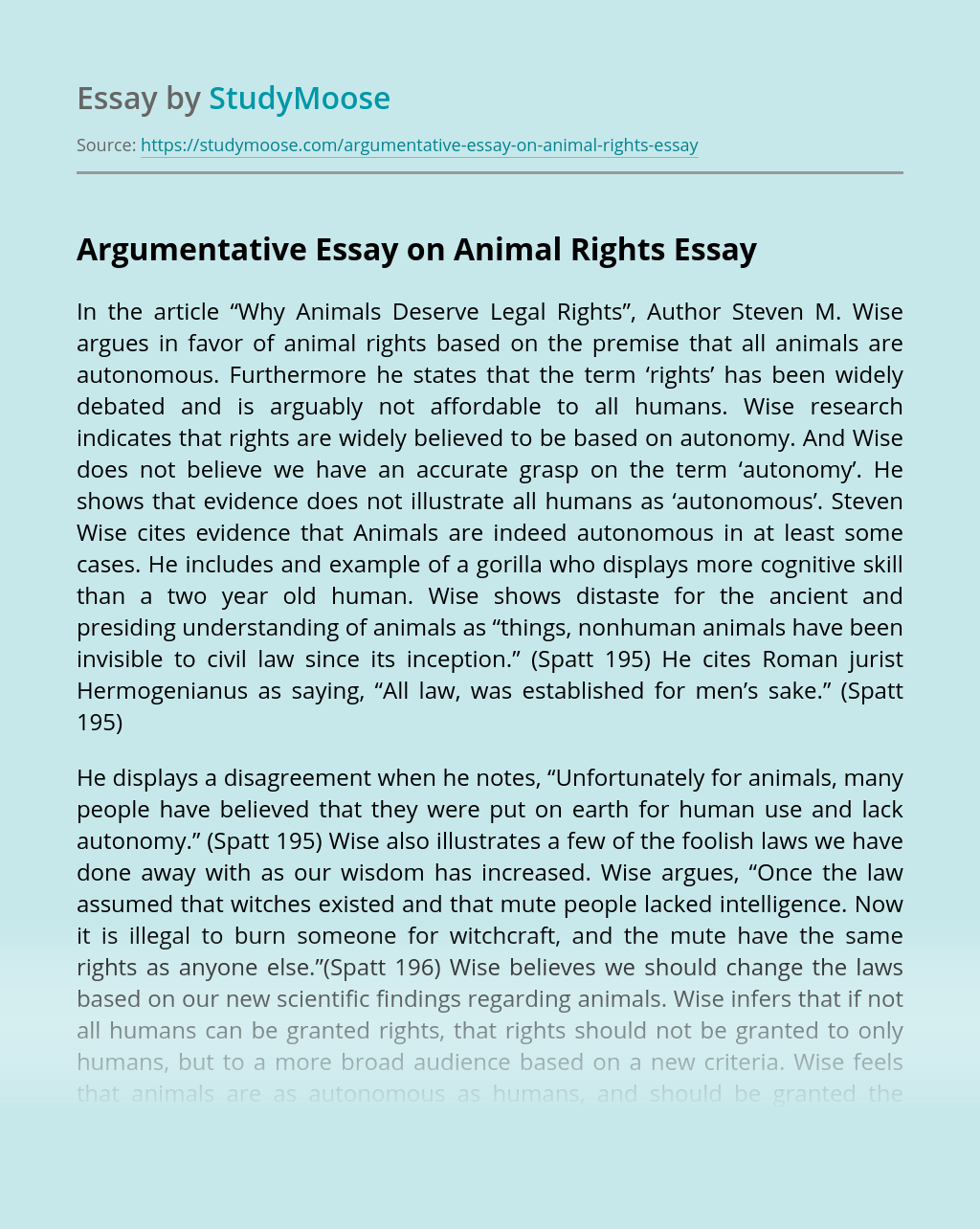