Argument Paper on the Safety That Comes with Seat Belts

Seat belts are intended to reduce injuries by stopping the person that is using it from hitting the hard interior things of the vehicle or other passengers also by preventing the passengers in the mid section and next to the driver seat from shooting out of the car’s windshield. There had been many accidents where the driver or the passenger had not worn their seat belt and because of that they had suffer severe injuries. They had severe injuries that they would have to be hospitalize for weeks and even months.

Don't use plagiarized sources. Get your custom essay on
“ Argument Paper on the Safety That Comes with Seat Belts ”
Get custom paper
NEW! smart matching with writer

In my opinion I feel that it is mandatory, that the passengers and the drivers wear their seat belts.

Most drivers say that they drive carefully, but that doesn’t mean the people in your lane on the highway drive carefully. I feel like that its necessary to wear your seat belt. It does not even take that long for someone to put on his or her sear belts.

More then half of the people that had been killed in 2000 due to not wearing their seat belts. “We should be allowed to ruin our own lives, but we shouldn’t be allowed to ruin the lives of others. So, yes, it’s tragic when someone dies because he refused to wear a seatbelt, but it’s much more tragic when a reckless driver kills innocent people. ” Exerted from http://www. reason. com/news/show/32805. html I want you to imagine if your son or daughter went to a party where they had alcohol, but your son or daughter decided not to consume any alcohol because they were going to drive home.

They did not want to get into an accident. Unfortunately he or she decided not to wear her seat belt because he or she thought that there were no cars and he or she didn’t see the point of it. He or she thought that it was safe outside because it was late and there should be very few cars on the street. She or he thought it that nothing could happen because he or she only lived a few blocks away from the party. Unlike your son or daughter some kids did consume alcohol. They got in a car but even though they did consume alcohol and they were under the influence of it they did remember to put on their seat belts.

The driver wanted to beat the yellow light and wanted to drop home his friends faster. He also thought that there should be very few cars in the roads and decided to go for it. Unfortunately by the time he got to the light it had turned red and he still went to cross the red light. Meanwhile your daughter or son was crossing the same intersection and there was a big collision. Your son or daughter rear was hit hard and the car spun around and hit a tree. Your son or daughter then was projected out the windshield and into the sidewalk. The intoxicated diver and his passengers were all injured but not as severe as your son or daughter.

Your son or daughter would have to be in the hospital for several weeks or even months while the intoxicated kids would go home with a few cuts and bruises. Most of this could have been avoided if your son or daughter would have been smart and would have been wearing their seat belt. It is in my interest that adults and especially teens should be wearing their seatbelts. A seat belt is sometimes called a safety belt the reason is because the seat belt is used to prevent most severe injuries, which I have just explained that could happen to anyone even those you love.

Argument Paper on the Safety That Comes with Seat Belts. (2018, Oct 30). Retrieved from https://studymoose.com/argument-paper-on-the-safety-that-comes-with-seat-belts-essay 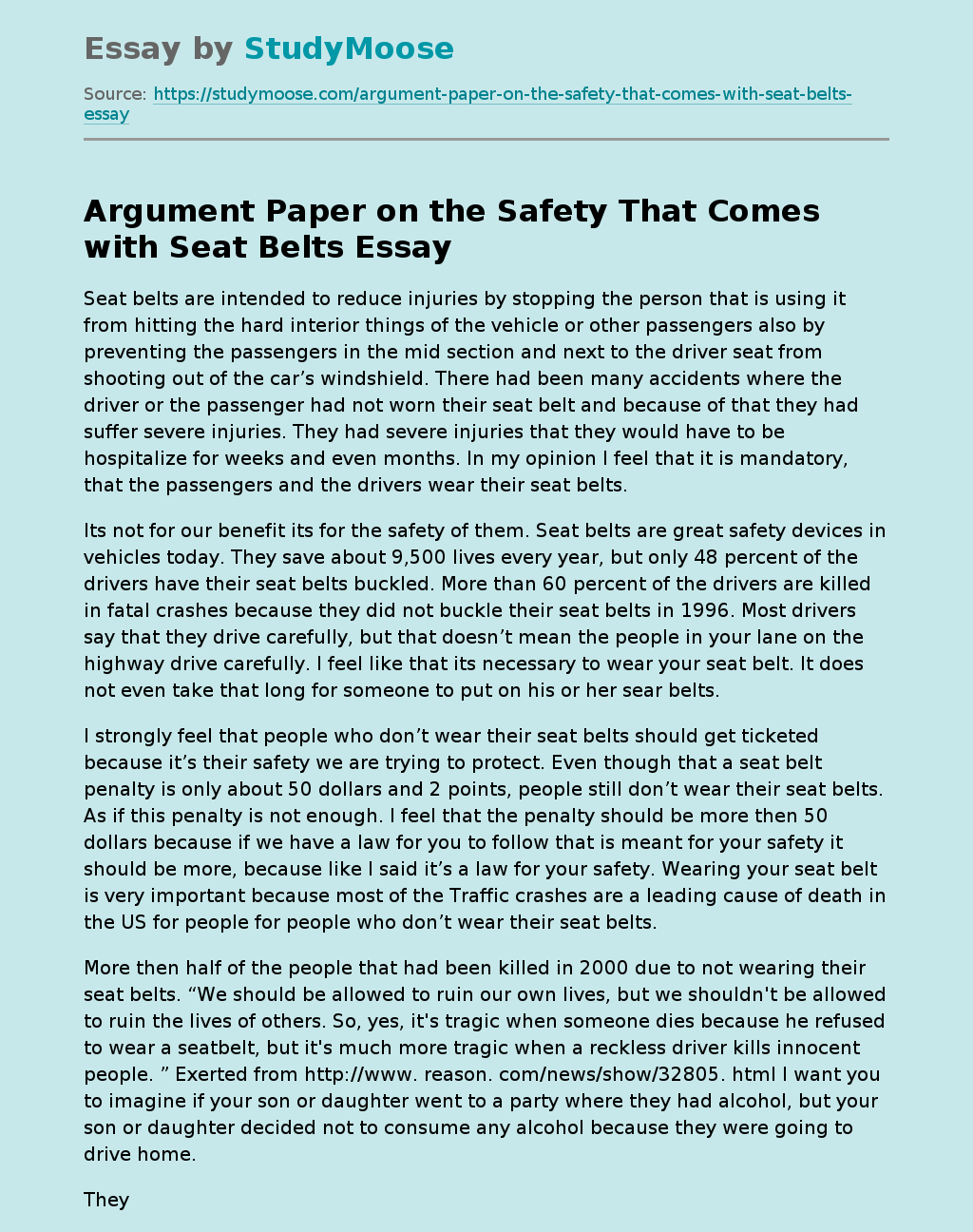