In “America’s Real Dream team”, published in the New York Times on March 21, 2010, Thomas went to a big Washington party to attend the 2010 Intel Science Talent Search finals. To his surprise, Most of the finalists who came from American high school hailed from immigrant families, largely from Asia. Thomas declares himself a “pro-immigration” fanatic. He points out keeping a constant flow of legal immigrants is the key to make our country stronger. He also explained that the most important economic competition is between people and their own imagination.

And this new idea can be used to produce commodity at a very low price by all kinds of ways, and can creates great profits for economy. Thomas Friedman used metaphor, special list, specific examples, and a sincere tone to illustrate that it is possible to make more technological and economical improvements through an open immigration policy. Thomas uses metaphors in the title to create boundless association.

While using metaphors, it not only attracts reader’s attention but also make a foreshadowing for readers to think about: what is America’s real dream team? After reader thinking about the comparison, it’s more convenient for him to elucidate his own view in the argument. “Dream team” is a reference to the U.S. basketball team assembled for the 1992 Olympic that contained the best players at that time.

Thomas compared the young people who generate new ideas to “dream team” to imply that these young people will use the new ideas they sparked to create miracles and will become the” real dream team” in the future. Metaphors here can make the abstract easier for readers to understand, additionally, it makes the language more vivid. In addition to metaphors, Thomas made use of a special statistics to make an obvious point: most of the finalists are immigrates. Usually, the writer will use statistics in this way: there are 40 finalists in total and how many percent of them are immigrates, but Thomas listed all the names of the Intel science talent finalist. In that way, while the readers reading the names of the finalists, they can easily found that these are foreigners’ names so that they can easily conclude that most of the finalists are immigrates, It gives the readers enough time to get it before he makes the conclusion. More accurately, he makes the conclusion with the reader together. It seems that he is communicating with the readers, and this can be more helpful for the readers to accept his argument.

He then gave a specific example to convince his thesis: “do not shut the door to immigrate” .From the statistics, the readers only know that most of the finalists are immigrates, but they do not know how outstanding exactly these immigrate are. Thomas gave us such an example: Namrata Anand, a 17year-old girl. She is a so smart student who can use spectral analysis proficiently to expose information about chemical history of “Andromeda Galaxy”. Obviously, Namrata is more outstanding than the peer students. Thomas used this example to imply that if we shut our door to immigrates, we may loss lots of young people like her, which prove the necessity of immigration. And it focuses on the theme again. Specific example here can make it easier to understand at the same time make it more persuasive. Thomas used quotes in various ways to express his view again. First of all, Thomas interviewed a biology teacher, Amanda Alonzo, a star teacher who had taught two of the finalists.

Amanda told him “it was resources provided by her school, extremely “supportive parents” and a grant from Intel that let her spend part of each day inspiring and preparing students to enter his contest.” Amanda is a successful teacher, what she said is very persuasive to the readers, and Thomas quotes her words to demonstrate immigrate is a kind of good source. In the second place, Thomas quotes what spokeswoman said: “don’t sweat about the problems our generation will have to deal with. Believe me, our future is in good hand.” As a representative of all finalists, what she said can represent what all finalists said adequately. And most of the finalists are immigrates, it proves that if we open the door to immigrates, we can get more excellent talents to solve the problems together. Besides, Thomas makes additions “as long as we don’t shut our door.” to make it more persuasive: as long as we keep a constant rate of immigrates, we’ll be more competitive and we will surely don’t need to worry about what we will be facing tomorrow. In a word, quotes here can provide the evidence for the argument. The author use a sincere tone to argue that we should keep our door open to the immigrates.

Sincere tones can make the reader more comfortable. If Thomas write like” we must keep the door open to the immigrates” instead, it will only let the readers feel disgusted. And sincere tone shows that he give an advice sincerely, which can be more easily accepted by others. Thomas used metaphors, special statistics, specific examples, quotes and a sincere tone to announce that we can keep improving technology and the economy, as long as we don’t shut our door to immigration. Metaphor make the language more vivid and metaphor in title can impress the readers more. Special statistics here can close to the readers and let the reader find the problems themselves. Specific examples here can make it easier for the readers to understand the thesis deeply, quotes can makes the language more concise and a sincere tone can make it easier to accept the view. Thomas use them in combination to get his thesis step by step. 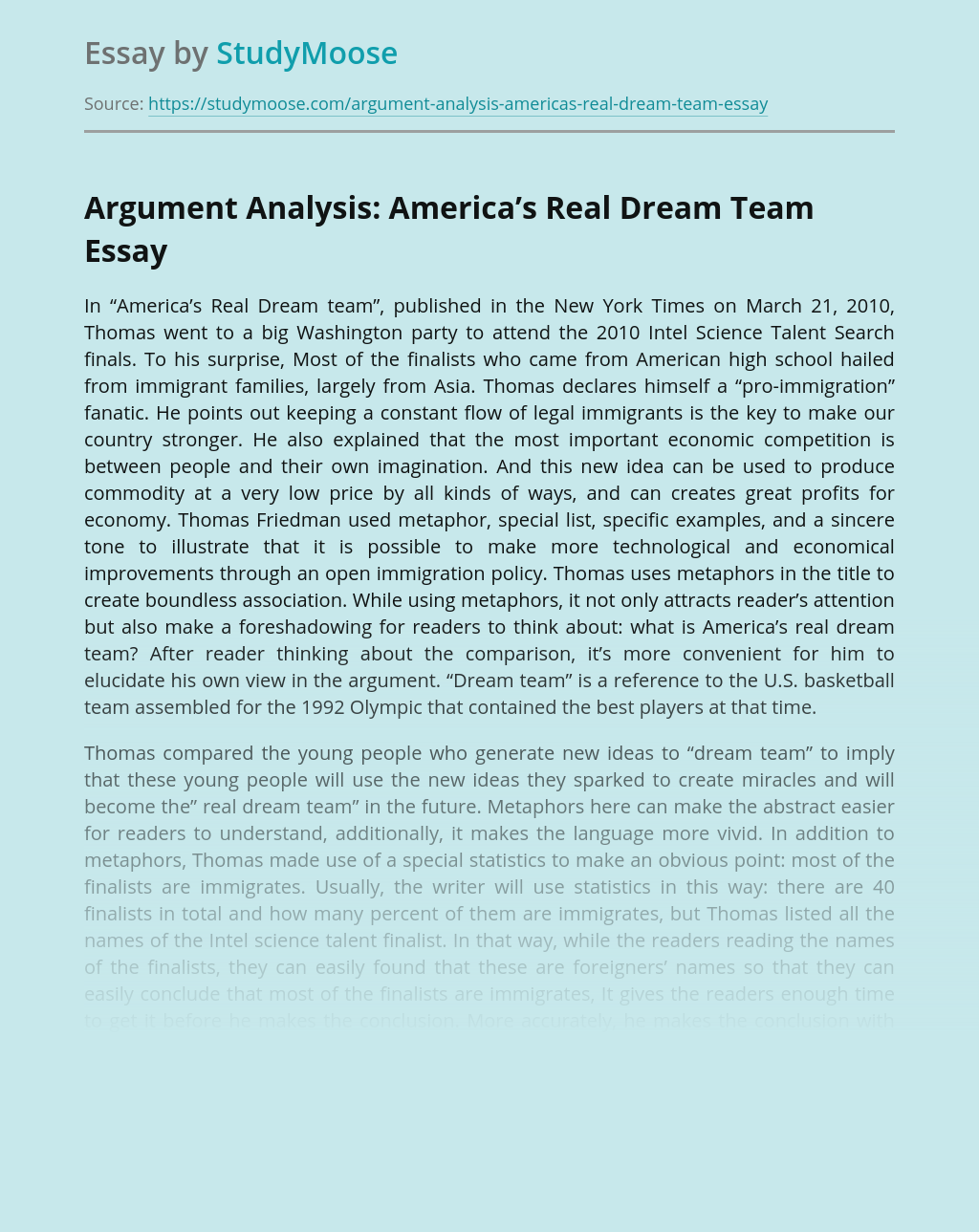 Rate this post In “America’s Real Dream team”, published in the New York Times on March 21, 2010, Thomas went to a big Washington party to attend the 2010 Intel Science Talent Search finals. To his surprise, Most of the finalists who came from American high school hailed from immigrant families, largely from Asia. Thomas...

Rate this post Through Robert Gray’s poems Diptych and Late Ferry I have actually learnt that remembering past occasions and revealing a brand-new fact or element to them can inspire discoveries. These recollections are evoked through the fond memories revealed by the speakers in each poem. Although the poems vary in the sense that one...

Get Essay
"Laugh and be Merry" by John Masefield

Rate this post An Analysis of Robert Frost’s Mending Wall In his poem, “Mending Wall”, Robert Frost presents two gentlemen and their yearly effort to fix a wall that separates their home. Frost uses the wall as a metaphor to represent the concept of barriers between individuals, and the repairing of the wall to demonstrate...

Rate this post While reading both articles The Death Penalty Violates the Constitution of the United States and Cyberbullying Has a Broader Impact than Traditional Bullying, I found that there were both deductive and inductive argument presented with in the articles. On the first article about the death penalty, the author used inductive arguments to...