Areas for Improvements for Badminton

I have watched a Badminton match Charlie vs. Bob; I observed the match and saw many areas of improvement which I will comment on. These are the tactic that could have been improved. Improvements Positioning and returning to correct position- when analysing the match I found that Charlie was not returning to the centre of the court, this meant that when Bob did a drop shot Charlie did not have enough time to retrieve the shot. To improve on this I felt that Charlie should have been near the centre of the court sot that he had better chance of hitting the shot that was going in any direction.

Don't use plagiarized sources. Get your custom essay on
“ Areas for Improvements for Badminton ”
Get custom paper
NEW! smart matching with writer

Another fault that I saw in Charlie’s play was that he was not in the correct ready position for example he was standing with his knees straight and the racket was facing towards the floor. This meant that he did not have the optimum agility if he had bent his knees and also his movement deteriorated because of this.

This meant that when Bob hit a smash towards the far end of the court he was not able to retrieve it as the time it took for him to re-position his racket was more than the time for the shot to reach the ground. As a result he lost a point.

To improve on this he should have kept his knees slightly bent and the racket should have been faced vertically, so that he could return the shot easily. To add to this, another error that I spotted was that Charlie was not focusing on the shuttle cock; this gave him less time to see where the shot was going and also less time to react to the shot.

To improve on this he should have had his eye on the ball at all times. Smash- I noticed that when Charlie hit his smash his shots were not going over the net, this was because when he hit the shuttle it was far below his head.

In order to improve this Charlie should have hit the shuttle when it was at its pinnacle point, this would have resulted in the shuttle descending over the net and onto other side of the court instead of hitting the net. Drop shot- Charlie’s drop shot also need to be improved. When he hit the drop shot it went much higher than the height of the net, this meant that Bob had enough time to return. To improve on this Charlie’s should have hit the drop shot with minimal power, this would have made it harder for Bob to return as he would have had less time.

Furthermore, a drop shot should only be taken when the player is at the back of the court and to ensure this Charlie should have disguised his shot by pretending that he was about to hit a normal shot into the air, when in actual fact he goes for the drop shot. This would have been a smart tactic. Short and Long Serve – Andrew did not play a good short serve against Mark. The shuttle was going to high over the net which gave Mark time to react. This is a good tactic but only when played minimum height and power.

He should disguise the shot when playing a short serve; his short serve should go just over the net and preferably hit the edge of the box. Also by disguising the shot, Mark may think he is playing a long serve which causes him to take a few steps back, but in actual fact Andrew should hit a short serve which may win him the point. Service- Charlie serve technique was poor against Bob. When serving he did not change his technique, and also it was going to high, this meant that Bob had enough time to react to it and had many options, this is not a good tactic as Bob could have returned it with a smash.

To improve on this Charlie should have hit his serve with minimal power so that it goes over the net and just into the baseline (preferably at the edge of the box). This would have prevented Bob hitting a smash and as a result forcing him to hit it in the air. Also to ensure a good service he could have disguised the shot by pretending to hit a high shot in the air when in actual fact he does the opposite this, would have given Bob less time to react as he would have been ready for a high serve. He could have also used the disguise shot for a long serve by doing the opposite for what he did with his short serve.

Areas for Improvements for Badminton. (2020, Jun 01). Retrieved from http://studymoose.com/areas-improvements-badminton-6069-new-essay 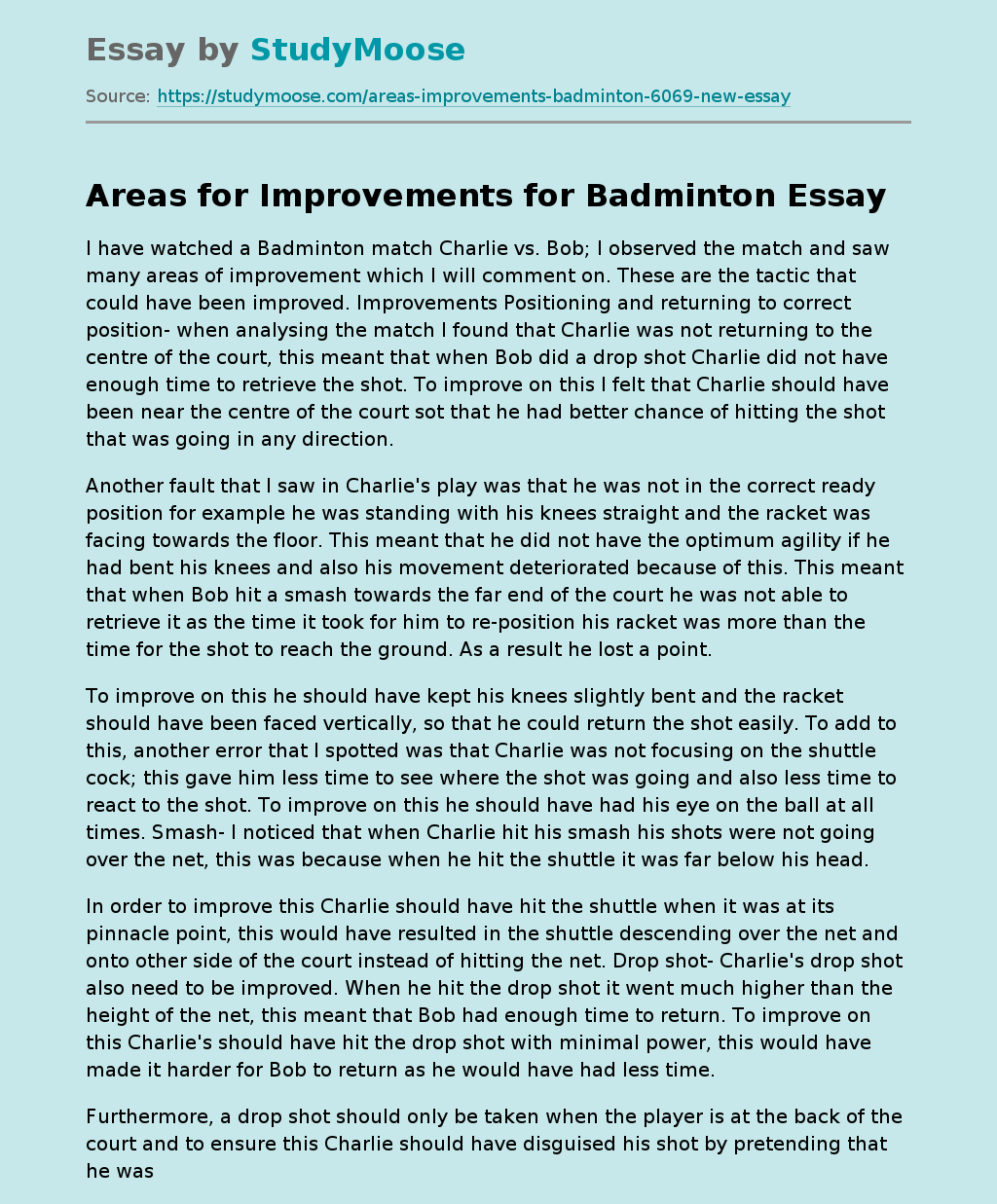