Are Zoos Cruel or Educational

Zoos are cruel because of recent incidents that have happened creating the deaths and injuries of some animals. In the 2005 DreamWorks move, Madagascar, a group of zoo animals wanted to leave the zoo for a day to explore New York little did they know there one day escape turned into an adventure greater than they could have every imagine. While exploring New York they were accidentally shipped to the island of Madagascar. Though they were among other animals that look like them, the four friends found themselves totally out sync with the real world.

Don't use plagiarized sources. Get your custom essay on
“ Are Zoos Cruel or Educational ”
Get custom paper
NEW! smart matching with writer

Living in the zoo sheltered them from their ability to live in their natural habitat. Although zoos are educational, animals are held in captivity unable to live and thrive in their natural habitat. Zoo keepers, scientist and animal groups continue to debate the issue with zoos being either place of education and entertainment or unnecessary prisons. While some people argue that zoos play an important role in conservation and research, others counter that they do more harm than good.

Zoos have been entertaining people with exotic animal collections since 1250 BC with Egyptian records describing different species of animals in captivity behind bars (Nationalgeographic. com). The Imperial Menagerie in Vienna, Austria was the first modern zoo established in 1752. There are thousands of zoos around the world today. Overtime, zoos have improved the environment for zoo animals from steel bar enclosures and cold cement cages to illusions mimicking the animals’ natural habitat with moats and ditches that separate the animals from people who visit the zoo.

Zoos are going beyond keeping animals alive in captivity. They have become more involved in conserving wild animals, reintroducing endangered species, and restoring habitats (Nationalgeographic. com). So why do scientist and animal groups believe that zoos are far from entertaining and educational? While conditions have improved for zoos by creating a natural habitat for animals critics continue to argue that the spacing available is not enough. Animals like zebras, giraffes and gazelles were designed to run across miles of open terrain, not live out their lives in captivity.

Despite a zoo’s best efforts, its animals often are deprived of privacy, confined to inadequate spaces and unable to engage in natural hunting and mating activities. Forced to live in man-made constructs, many animals began to display obsessive, repetitive behaviors (Fact Sheet on Zoos). David Hancocks, a zoo consultant and former zoo director, describes the natural-looking zoo inhabit as mere illusions, arguing that they’re not much of an improvement in terms of space (www. time. com).

Many captive animals exhibit signs of severe distress: People have witnessed elephants bobbing their heads, bears pacing back and forth and wild cats obsessively grooming themselves (www. time. com). This display of behavior has caused some animals to act out either among themselves or humans. SeaWorld trainer Dawn Brancheau was killed on February 24, 2010 after being attacked by the killer whale “Tilikum” at Shamu Stadium in Orlando, Florida during a live performance. The whale dragged her underwater, toying with her until her death.

Brancheau was described as one of the best in her profession. So what went wrong? Until behavior records are closely examined as to what led the whale to kill the trainer the question remains (www. time. com). In December 2007, “Tatiana, a 4-year-old Siberian tiger, escaped from its enclosure at the San Francisco Zoo and killed one teen and injured two others on Christmas afternoon” (Chua-Eoan). There have been many articles about zoos keepers neglecting animals and displaying other acts of mistreatment. The most recent article comes from a zoo director being charged with animal cruelty.

Meghan Mogensen, 27 year old zoo director allegedly drowned a wounded wallaby in a bucket of water after suffering from an eye injury in his pen at the zoo (Daily News). In conclusion, although zoos have created natural-looking environments for animals, in my opinion, I believe it is cruel to house animals in captivity. The incidents mentioned above is proof to why animals need to be able to hunt and roam in the wild which cannot be created by a zoo. There is no reason why innocent lives are continually lost for the sake of research, education, or entrainment. So what is your opinion on zoos?

Are Zoos Cruel or Educational. (2016, Nov 21). Retrieved from https://studymoose.com/are-zoos-cruel-or-educational-essay 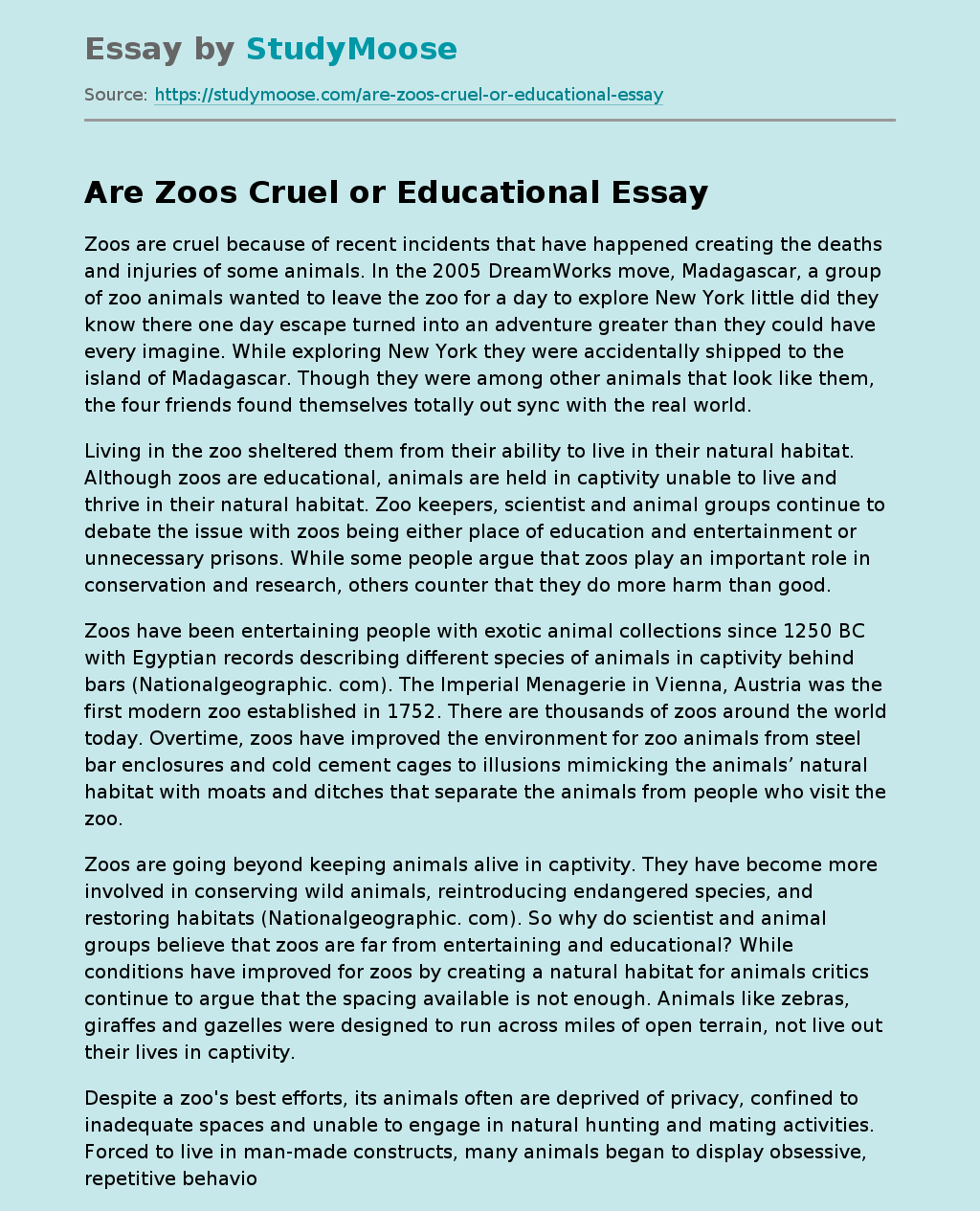