There are numerous theories that attempt to explain the motivation behind people acting in certain ways. This paper will address three of these theories, apply these theories to how people choose to behave honestly or dishonestly, and will attempt to determine whether or not people are inherently honest.

Before looking into the motivation behind people’s decision to be honest, it is important to define some key terms in order to fully understand and explore what it means to be inherently honest.

Don't use plagiarized sources. Get your custom essay on
“ Are People Inherently Honest? ”
Get custom paper
NEW! smart matching with writer

Merriam-Webster defines honest as “free from fraud or deception,” or simply put, truthful. It defines inherent as “belonging by nature or habit. ” The majority of people simply associate something being inherent as ‘natural’ or ‘innate’. Interestingly, this definition expands our view on what one may consider ‘inherent’ by noting how past habits can also play a vital role in how one behaves.

Now that we have defined what honesty and inherent behaviour entails, we can now look at the various theories that attempt to identify the motivation behind people behaving honestly.

One of these theories is the fact that humans choose to act honestly or not based on what we feel is ‘morally good’ or the ‘right thing to do’ according to a very personal set of rules and morals. An individual’s behaviours are heavily influenced in order to satisfy this individual set of rules.

Of course, there are a number of positions one can take on when defining this set of rules. Deontologists would argue that one should be honest one hundred percent of the time, regardless of the situation.

They believe that it is ones’ moral obligation to behave honestly and have a duty of adhering to this universal rule. On the other hand, utilitarianism claims that the decision to act honestly or dishonestly varies depending on the situation, considering all costs, benefits, and consequences that will result from the behaviour.

Regardless of the person’s moral standpoint, their choice to behave honestly or not is strongly influenced by their personal, or inherent, set of behaviours that they consider morally ‘right’. This supports the argument that people are in fact inherently honest. Another theory that attempts to explain the motivation behind behaving honestly is focused on the consequences that will result from behaving honestly or dishonestly. Uri Gneezy’s paper on the role of consequences in lying looks at how different benefits and costs influence one’s decision to behave honestly or dishonestly.

From his studies, he comes to a number of conclusions describing how people conduct a cost-benefit analysis when deciding to lie or not. First, he finds that people are particularly sensitive to their personal gain when deciding to lie, meaning that they place a high priority on personal gain in their cost-benefit analysis. He also finds that people also tend to lie less when the lie harms another party. However, this harm plays less of a role in choosing not to lie compared to the increased gains from lying.

This suggests that the marginal personal gain from a lie is greater than the marginal harm that is caused from the lie. Because people are constantly trying to maximize their personal utility, these findings display how one will behave dishonestly when doing so maximizes their utility. This suggests that people do not inherently behave honestly, but rather behave in a way that will create the most personal gain. A third theory that explains how people behave is based on the image that is associated with behaving honestly or dishonestly, as well as the use of excuses to justify dishonesty.

There tends to be a negative stigma attached with lying; therefore, people are inclined to be honest simply to maintain a positive image of themself. There are a number of ways to look at this. First, people have a natural desire to see themselves in a positive light and like to feel that they are doing what is right. Much of this plays into the previously discussed individual set of morals that people have and doing what they consider ‘morally right’.

However, there are cases when people create excuses to justify to themselves that acting dishonestly is the right thing to do. For example, if a man lies by telling his pregnant wife that she doesn’t look overweight, he will justify this lie to himself by claiming that he doesn’t want to hurt her feelings, maintaining a positive image of himself. In addition, people will tend to lie less to avoid making a bad impression to others. Similarly to above, people may use excuses to justify acting dishonestly, simply to maintain their positive impression on others.

This shows that in order to maintain a positive impression of oneself on oneself as well as on others, people are inclined to behave honestly and are willing to make excuses to justify acting dishonestly to maintain this impression. This suggests that due to the natural desire to create and maintain a positive impression, people are inherently honest. The above theories and discussion suggest both that people are and are not inherently honest. This is precisely why many social scientists have difficulty in this area.

On one hand, people behave honestly to satisfy their personal set of morals and to promote a positive image of themselves (in their own as well as others’ eyes), but are willing to be dishonest if it results in enough personal gain to justify the lie. From this, we conclude that one cannot make an overarching statement claiming that people are or are not inherently honest. Whether a person is inherently honest depends on how they weigh and balance the importance of their morals, personal gain, their self-image, and the image they want to portray to others. 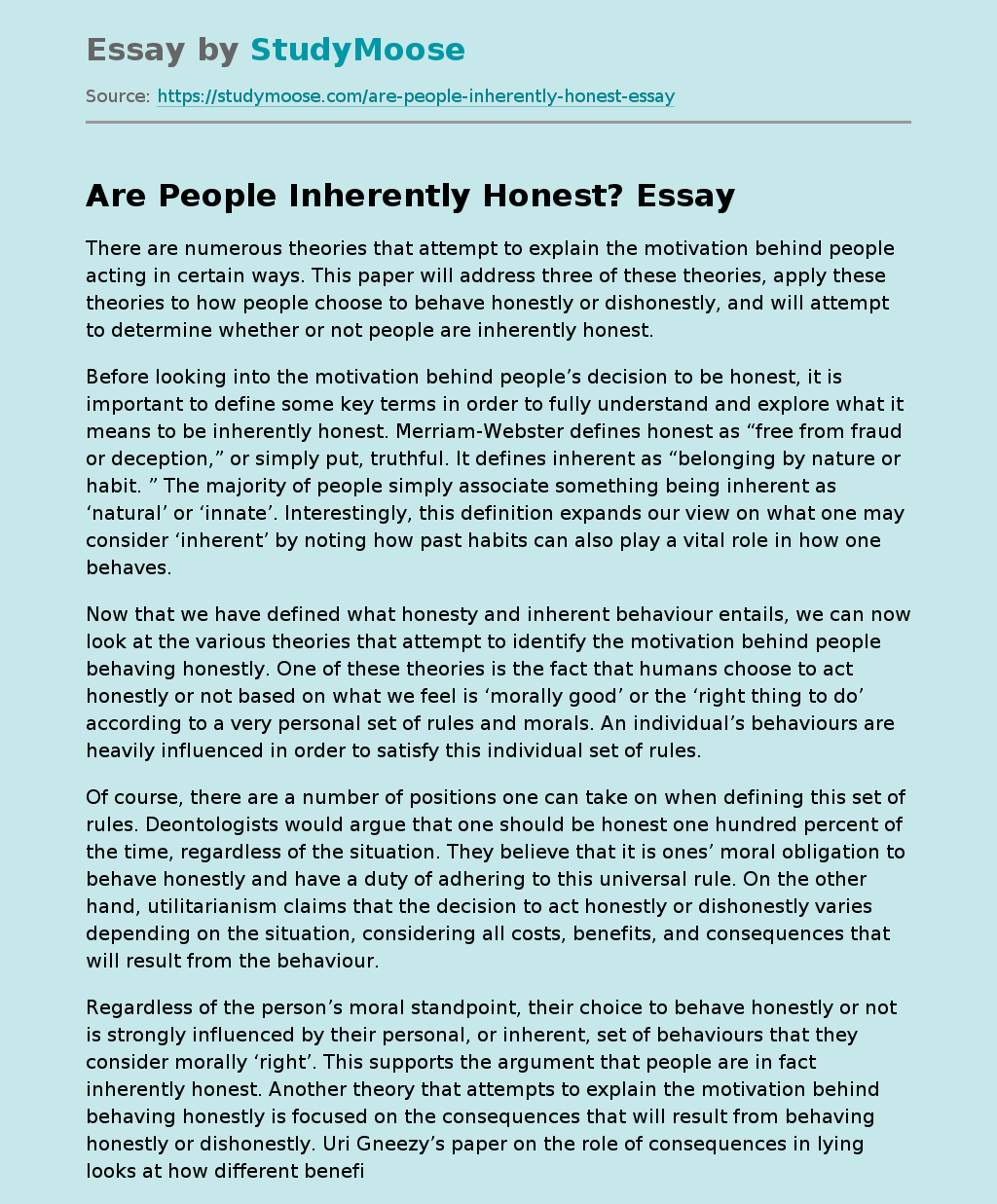