Are memories permanent and unalterable?

There has been a large debate over the recent years on whether information stored in long-term memory is permanent and unalterable. There are many people who agree with this assumption either because of personal experiences or scientific findings supporting it. An obvious example would be the sort of cued recall that occurs in contextual situations. Details of a place visited might not be remembered until a time of revisiting, or instances where experiences during school life might have been forgotten and a photograph of a classmate might trigger memories.

Don't use plagiarized sources. Get your custom essay on
“ Are memories permanent and unalterable? ”
Get custom paper
NEW! smart matching with writer

Also there are several occasions where certain smells evoke certain memories. Several studies over the years indicated that memories become less available as the interval increases between the time of the information’s initial acquisition and the time of its attempted retrieval. This phenomenon is named ‘forgetting’ (Loftus 1980). Despite the agreement on the existence of this phenomenon, the factors that underlie its functioning are shown to be indefinable.

The main differentiation on beliefs lies on whether forgetting results in a complete lost of stored information, or consists of a loss to access of that information which was once stored and will always be available.

Many theorists and psychologists have opposed on the complete loss of stored information referring to examples of retrieval techniques that are assumed to uncover previously forgotten information. In a survey of psychologists by Loftus and Loftus (1980), 84% favored the position that stored information is never lost from the memory system, although it may normally be inaccessible.

Some evidence in support of this favored position can be found in the studies of Wilder Penfiel and his associates.

While treating epileptic patients during 1940s, he was removing the damaged areas in their brains. In order to spot the damaged area he was stimulating the surface of the brain with a weak electrical current. During this electrical stimulation, Penfield discovered that by placing the stimulating electrode in certain parts of the brain and especially on the frontal lobe, caused some patients to have ‘flashbacks’ of past experiences.

According to his beliefs, “It is clear that the neuronal action that accompanies each succeeding state of consciousness leaves its permanent imprint on the brain. The imprint, or record, is a trail of facilitation of neural connections that can be followed again by an electrical current many years later with no loss of detail, as though a tape recorder had been receiving it all. ” (Penfield, 1969). Besides the small number actual ‘flashbacks’ among Penfield’s patients, Neisser (1967) argued that individuals under brain stimulation might be reconstructing these experiences rather than reliving them.

This reconstraction hypothesis was also supported by Mahl, Rothenberg, Delgado, and Hamlin (1964) who found that memories produced by electrical stimulation mainly consisted of thoughts existing prior and during the stimulation. (As cited in Loftus & Loftus, 1980) Freud clearly supported the permanence of memory, on which he based the psychoanalytic approach. One of the ways by which he introduced his skepticism was the mystic writing pad paradigm.

According to this paradigm memory consists of a wax layer, covered by a sheet of wax paper and a transparent celluloid sheet. When a memory is ‘written’ on the celluloid sheet, the words appear on the wax paper. When new experiences bring new memories, the paper is moved free of the wax layer, but the “trace” of the words has been preserved at the wax tablet beneath the sheets. According to his writings “memory has an unlimited receptive capacity for new perceptions and nevertheless lays down permanent, though not unalterable, memory traces of them” (Ibid, 176).

Having Freud as a reference, psychoanalysis uses techniques such as transference, dream interpretation and mainly free association in order for patients to re-experience repressed feelings and wishes which have been frustrated in childhood, such as memories referring to painful incidents which are not recalled in order to avoid anxiety. This suggests that memory’s retrieval mechanism may be responsible for repression phenomena.

Despite apparent success in using psychoanalysis to recover memories, the technique is subject to many criticisms. Skeptics and many clinicians support the argument that recovered memories are fabrications and they evaluate this opinion with scientific evidence. The phenomenon of infantile amnesia is one of them, and suggests that things learned from specific experiences during infancy are forgotten rapidly and it’s unlike to be remembered at all during adulthood. Another fact that supports their claim is the false memory syndrome.

By false memory we mean these memories which are distortions of actual experiences, or creations of imagined ones. Many false memories involve a mixture and confusion of facts that may have happened in different times, but are remembered as occurring together. Others are a confusion of dreams and reality, and many of them involve errors in source memory. Recovered memories can also find their origin in fantasy, illusion and hallucination, in borrowed ideas and at last in an implantation of a suggestion by the therapist.

Scientific research has given support to the fallibility of memory and it’s well known that it’s possible to implant people with experiences, feelings and even traumatic incidents that have never occurred in the past. “The phenomenon of memory repression, and the process of therapy used in these cases to recover the memories, have not gained acceptance in the field of psychology, and are not scientifically reliable” (Schacter 1996). The permanence of human memory is also supported by hypnotherapists who view hypnosis as a retrieval technique for completely forgotten memories.

According to several hypnotherapists regression under hypnosis successfully brings out completely forgotten memories while it is possible to bring them out simply by suggesting that they would be recalled. This technique has been vastly used by law agencies around the world as an aid in criminal investigations since the early 1960s. Despite the number of successes in recovering memories, hypnosis has been criticized on many grounds over the years. Studies on hypnotic age regression showed only a limited number of returning to a developmentally previous mode of psychological functioning.

Several studies have examined the EEG patterns of adults regressed to early months of their life in order to observe whether there is a return of the slow, arrhythmic brain waves found during infancy. While early studies did not find any changes from the normal adult EEG patterns (True & Stephenson, 1951), resent evidence provided by Raikov (1983) showed return during hypnotic regression but posed inherent methodological difficulties to the extent that the findings could not provide convincing support.

Even if hypnotism achieves it’s goal which is reviving a repressed inaccessible memory, it is more likely because of interpersonal relationship existing between hypnotist and patient and not because of the mysterious power that hypnosis is attributed with (Hilgard, 1977). Furthermore several other experiments not only failed to produce reviving of experiences but showed that patients under hypnosis provided descriptions even if they were asked to progress to an age of 70 or 80 years while being younger. Other hypnotised patients also showed a return to prenatal life or even past incarnations.

Are memories permanent and unalterable?. (2017, Sep 10). Retrieved from https://studymoose.com/are-memories-permanent-and-unalterable-essay 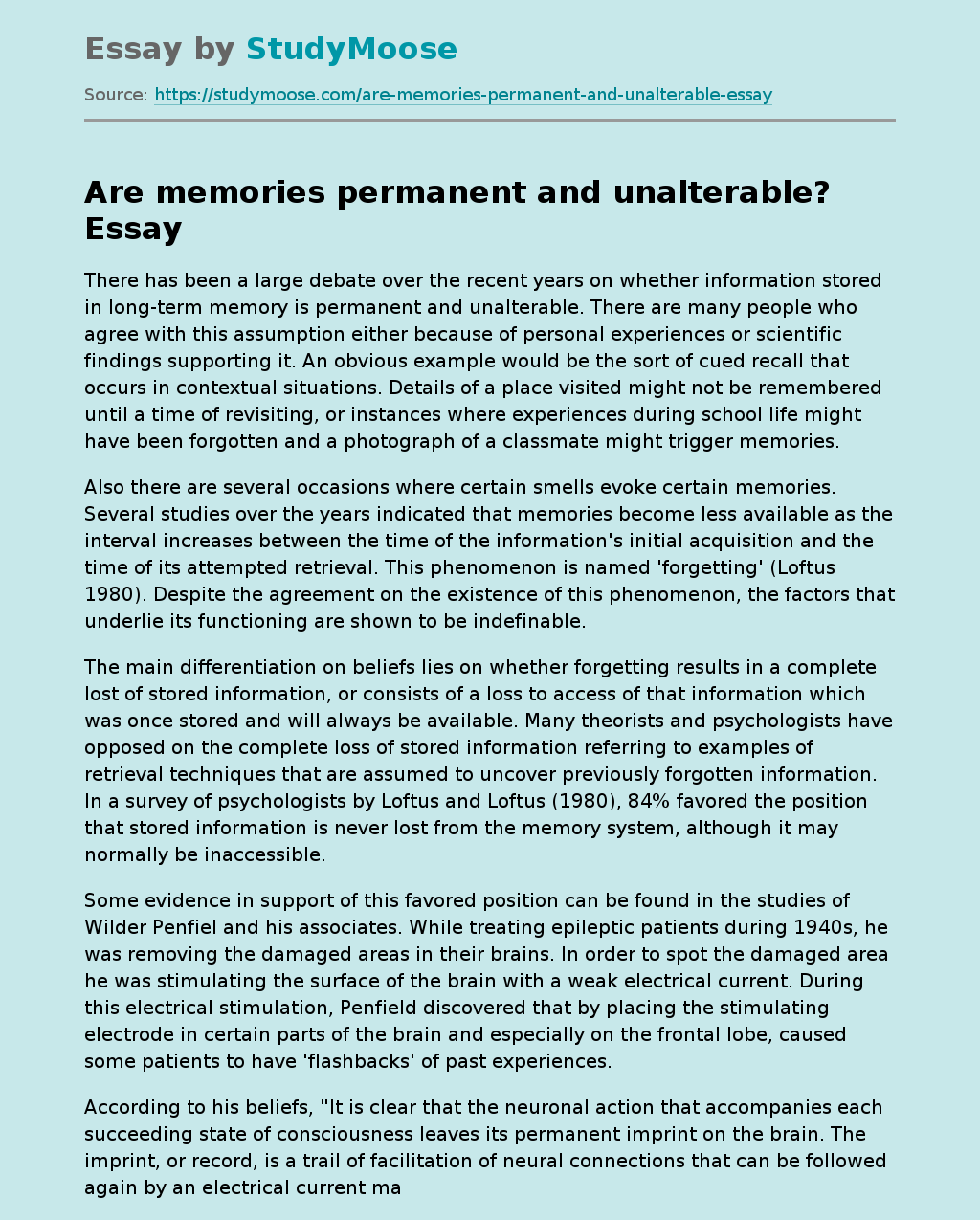