Are Grades and Effective Means of Motivation?

Grades are often seen to be one of, if not the most effective method of motivating a student to work to their fullest potential. For example, a student who receives an A-grade is going to be encouraged by the grade, as they see it to be an affirmation of their academic efforts. An A-student views their grade with pride, and will work very hard to maintain said grade, once achieved. An example of this is as follows.

John recently received an A on his Math test.

Don't use plagiarized sources. Get your custom essay on
“ Are Grades and Effective Means of Motivation? ”
Get custom paper
NEW! smart matching with writer

He then goes home with a sense of pride, bragging about it to all of his friends.

John now realizes that he must keep up the good work and continue to work hard for school, in order to continue to feel as good as he does today. Conversely, a failing student will regard his/her grades with shame, and will be more motivated to raise their grade from the gutter as a result. An example of this is as follows. John receives an F for failing to complete an assignment on time. As a reaction to this, John decides that he will turn his life around completely and alter his studying habits so that he turns in his assignments on time in the future. In conclusion, grades are by all means the most effective way of motivating a student to excel.

Grades are the least effective way of motivating a student. This can be said with such certainty due to the very nature of grades themselves.

They serve to rank students against each other. Personally, when I feel as though somebody is putting me up against a friend, I feel much less willing to work harder for the class than if they were to simply tell me what I needed to change in order to excel. The Whitehall Study, performed in England 1967, has shown us with certainty that humans placed in a competitive hierarchical situation over prolonged periods of time will increase their chances of gaining cardiovascular disease by 40%.

This shows us that students placed under similar conditions (as they are with the grade system) are not only less motivated to work, but are also at risk of dying. Another important factor to consider when discussing high-school students and their academic achievements is that many of us are apathetic. This means that when we see a grade, we simply just don’t care about it and it doesn’t serve to motivate us one way or the other. This leads me to conclude that grades, when seriously considered by the student, are not only the least effective way of motivating students to do their best work, but are also a serious health concern.

This writing activity was unlike anything I had seen before. It challenged me to write from two entirely different perspectives, which is something very new to me. The main difficulty I faced with this assignment was the assignment itself. While it may seem redundant to say so, the assignment asked us to write about something from two polarized perspectives, and that was what challenged me the most. I found it easy enough to write the doubting response, as it is what I can most easily associate with. When it came to writing the believing response, I felt as though I was stuck. I stared blankly at my page for several minutes until I finally decided to ask an A-student what their perspective on the matter was.

Doing so helped me greatly, as it broadened my mind and aided me in writing about something from an entirely foreign perspective. After completing this assignment I can honestly say that I am a more well-rounded person, as I find it easier to relate to what others are saying, even if it goes against every fiber of my existence. Believing and doubting helps me wallow in complexity by reminding me not to forget that there is a flip-side to what I am arguing at any given time, and I’ve caught myself thinking about a few of my foundational beliefs and how they can be contradicted by somebody with a different outlook on life. In conclusion, I believe that this assignment has helped me to understand that there are several other points of view to consider.

Are Grades and Effective Means of Motivation?. (2016, Dec 09). Retrieved from https://studymoose.com/are-grades-and-effective-means-of-motivation-essay 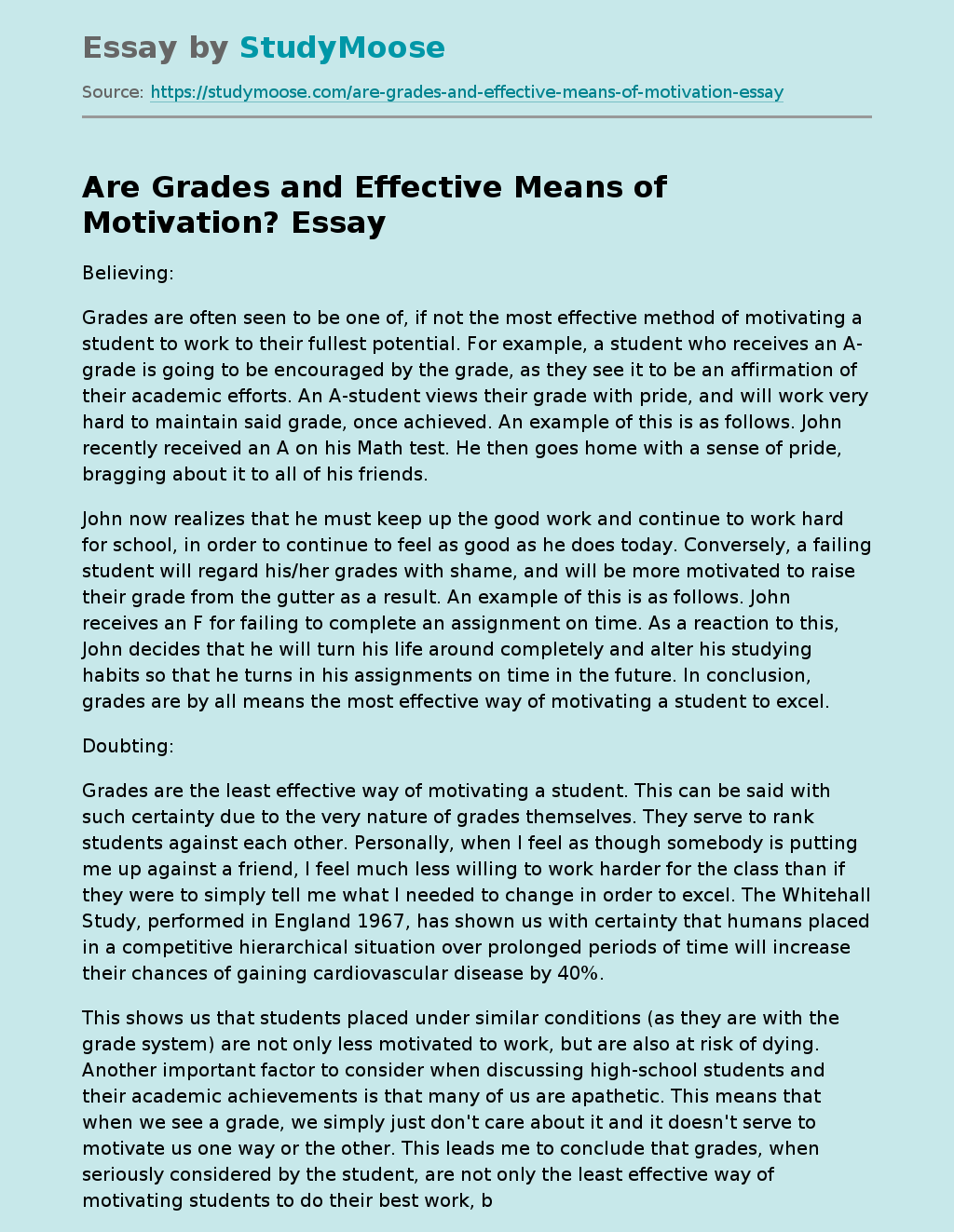