INTRODUCTION
So, there was a time in which beauty contests had just started, in the 1920s. It started getting out of control, and it ended up in a murder scene on Christmas Day of 1996. Who ever thought that a simple contest started up to boost tourism would end up in such a way ? After the murder of the six-year-old on December 25th contests were and still are held yearly. Ranging from 6 months to 6 years to even contests for elders. Today I will describe why most contests are horrible for children.

Don't use plagiarized sources. Get your custom essay on
“ Are Beauty Contests Harmful? ”
Get custom paper
NEW! smart matching with writer

BODY
A) History of Women in Pageants
In 1854 P.T. Barnum decided to organize the first beauty pageant, which would rate women on their physical appearance. This was taken down by protests. Therefore, he organized a photographic beauty contest, which later became very popular and it was the first time high class and low class values mixed into a totally new value, which is still kept today. The first Miss America contest was held in 1921 in Atlantic City.

It gave an image of sensuality, so it was obscured by a long week of celebrations : choir competitions, automobile races, orchestra , and sport events.The main sponsor is a swimming suit company. When, in 1951, Miss America (whom had one that year) refused to pose in a swimming suit, the sponsor company decided to side with Universal Pictures and invented Miss Universe. The first time this competition happened was in 1952.

B) Children’s Pageants and their History
In the spring of1881 one of the first festivals for young girls was organized by John Ruskin , a British art critic and historic in England.

He wanted to honor their innocence. These festivals were known as May Queen festivals, and little girls were crowned « likeablest and loveablest » These quickly spread to North America especially. At the beginning of the 20th century baby parades organized by the Asbury Park became one of the most popular baby beauty contests. In 1893 this parade had about 30,000 spectators. A movie was created about this competition as well. The pageants are now about 25,000 per year and attract about 3 million children per year. Nowadays, the fame of boy pageants is growing enormously as well. About 10% of participants in beauty contests are young boys all dressed in tuxedoes. They try to flirt with the judges on remarking their appearance “Oh you are so pretty” is an example. At the young age of even 2, the boys get manicures and put make-up. They try to rock in a girls’ world. Some mothers think they can turn their little boys into girls. They are the “girls” that they never had.

C) Pageants Ruin Children
I think most of these contests are negative for children, their personality, and families. Children are judged on the way they look, even if the first lesson in life you should learn is that beauty is not everything. Parents teach that, school, and even others teach this lesson. It is not normal to put your children through this. If a girl or boy loses they will be really sad, and think that they do not belong in this world. And have you ever thought of the many men who watch these pageants? There probably are so many pedophiles watching that it is scary! Most of the parents complain that the quality of the prizes received are not that great and that contests are not organized well and are full of falsity. Even if some contests award up to $10,000. One of the false things that happens during these competitions is lying. Many parents want to help their children, and therefore lie about their age, and some even create false residency documents to compete in multiple pageants. This would allow the children to gain more prizes and money.

D) Children and their Families
Another negative idea given by pageants is that most of the girls and boys are forced to do this by their own parents. A parent can not say that the child made this decision when he was a baby, as it is impossible. A boy was having “a knock-down, lying-on-the-floor, kicking-and-screaming tandrum” when his mom gave him directions on how to prepare for a Boy Beauty Pageant. It costs parents money (up to even $10,000 per pageant for everything). It teaches girls that their self-worth is measured by how pretty a child is. It may create narcisissm and when putting too much emphasis on physical attractiveness causes them to form relationships with others based on appearance. On glitz pageants, which are the most important and famous pageants girls and boys perform the”sassy walk” and “pretty feet”, and have “duckface” expressions.

Conclusion
In conclusion, there are many positive parts, but I think pageants should be kept to «Natural» or none at all. It is a waste of money for the family who enters their child at a pageant, and even if there are prizes, not everyone can win. A child will start to think that appearance is the main imporant idea in life, and his future will be based on this. 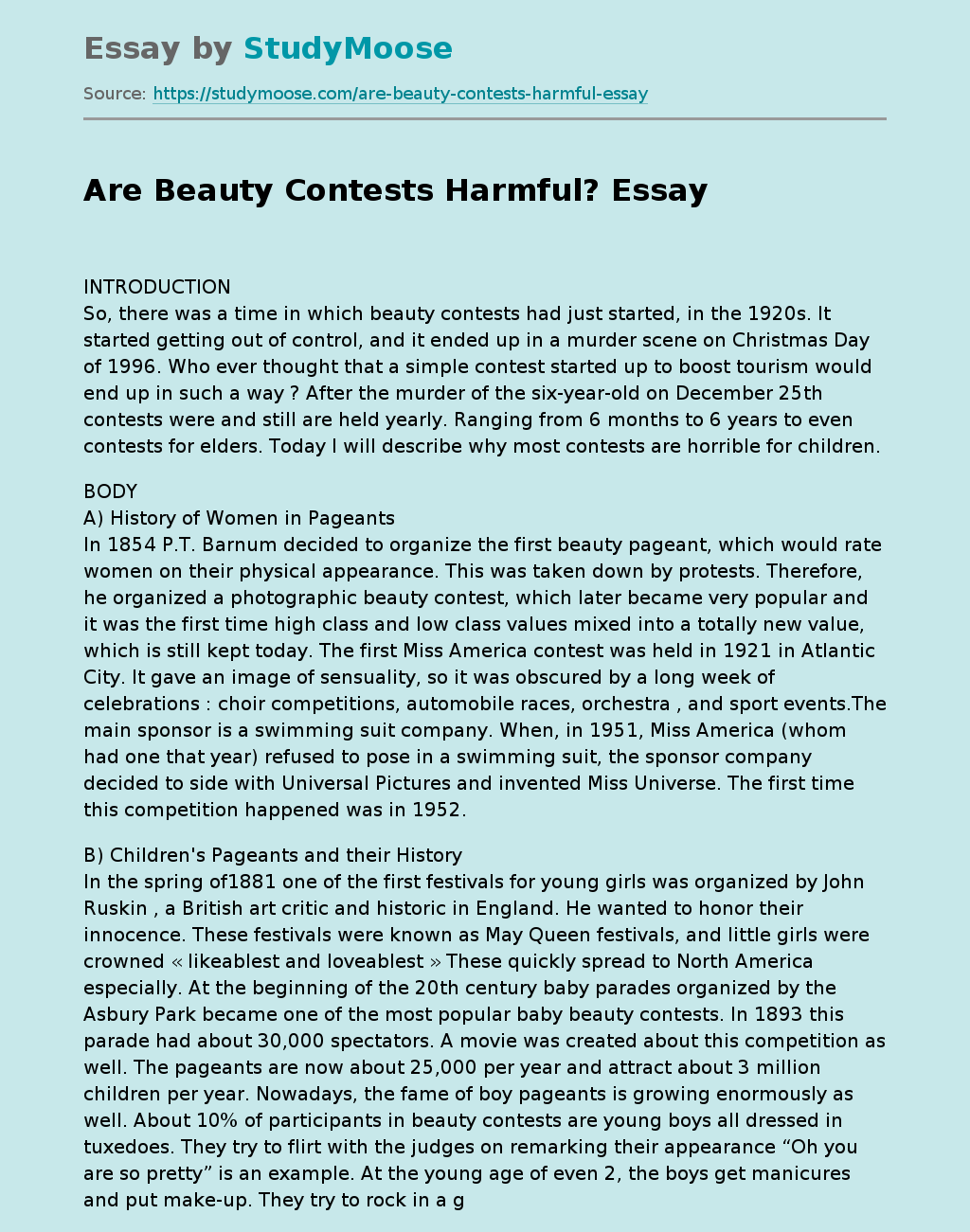