This paper will discuss the history and background of Arck Systems and its merger with Lux Software. I will then examine, discuss, and analyze the nuances of the merger and the resulting issues that arose with different compensation packages for each company’s sales team. In my analysis, I will address the intended and unintended consequences of incentive compensation plans. Finally, I will offer my recommendations to Arck Systems. Background Arck Systems Arck Systems was a medium-sized manufacturer of network computers used by many corporations to manage data.

Don't use plagiarized sources.
Get Your Custom Essay on Arck Systems Case Analysis Just from $13,9/Page

Customers used the serves to run software that helped them manage finances, compensation & benefits and customer accounts. This hardware was integral to ensuring the success of the corporation. In addition to the hardware it produced, Arck also developed and distributed an operating system with its servers; however, third party software companies provided the software applications. Arck Systems’ Merger with Lux Software, Inc.

Lux Software, Inc was a leading provider of middleware. Middleware is software that acts as an intermediary between different software applications. More companies need middleware as enterprise software applications become more complex making middleware a rapidly growing product and industry. Middleware Purchasing Lux was an ingenious move on Arck’s part because it provides a surefire way for them to develop the software side of their company in addition to enhancing the operating system they’ve developed for their hardware.

Arck was able to purchase Lux Software, Inc rather quickly in order not to disrupt the flow of business. The merger/acquisition contained provisions that provided incentives for engineers and software developers to stay with Arck after the acquisition. This ensured that the talent and skill stayed with the company for at least three years. However, no provisions were made to keep the Lux Software sales team on board for the long term. Immediately after the merger Lux’s executive vice president of sales announced that he would be leaving Lux Sales and taking the sales management team with him.

Fortunately, no key sales people left. Arck’s CEO Chatterji was not concerned. Similarities in Sales Management However, Arck’s Executive Vice President of Sales, Bryan Mynor, seemed concerned about having to manage Lux’s sales team. Although Mynor had successfully managed Arck’s sales team and doubled the company’s sales since becoming vice president, he was unsure about the most effective way for managing Lux’s sales team. Lux and Arck operate their sales force under different methods, targeting different decision makers within a company.

Arck salespeople tended to target the CIO or CTO, who would be concerned about the performance specifications of the servers. Lux focused selling to the finance or administrative divisions of company, or those who would be interested in the implementation of the software. Hence, Mynor is used to managing a sales team that is much more technically oriented sales force. So as to not disturb the flow of business as usual, Mynor decided to keep the two sales teams separate until he could figure out how to merge them.

After a conversation with Synder, former EVP of sales for Lux, Mynor was assured that both Arck and Lux utilized similar approaches to sales management, including: •Salespeople dedicated to territories based on geography and industry •Levels of organization were the same (district & regional managers, head of sales and EVP of sales) •Sales people could set discounts at their own discretion •Similar sales dynamics (avg. sale was approx. $350,000 for both) However, Snyder described Lux’s compensation plan as “aggressive” and “standard for the industry.

” Mynor was not worried about the compensation; his main goal was to build a close relationship with Sharon Esteves, the most senior sales executive to stay with the company after the merger. Differences in Sales Compensation It wasn’t until Mynor began to review the compensation plan for Lux salespeople that he realized that he may have more of challenge managing the Lux sales team. The Lux Sales compensation package was vastly different than the Arck’s. Lux’s compensation package included accelerators, which increased the percentage commission a salesperson could earn based upon quarterly sales.

A salesperson could potentially earn 24% commission. Arck’s compensation package included a standard 9% base commission paid after the quota was met. There was also a $50,000 bonus if the $6 million sales cap is reached. The Critical Issue The critical issue facing Arck Systems is attempting to figure out how to best manage the Lux sales team. While reviewing the plan, Mynor noticed that “top guns” at Lux make 30 times more than the average salesperson. Whereas the best sellers at Arck make only 4 or 5 times more than the average salesperson.

He understands that the sales approach differs from Arck because it requires a more personable approach, rather than a technical one. If he decides to change the compensation plan, he needs to be able to anticipate how the sales people react. And predicting or anticipating reactions is a near impossible task. Analysis The ultimate goal of incentive compensation packages is to attract and retain employees, specifically well or high-performing employees in dispensable roles.

The incentives should be designed in such a way that continuously motivates employees and recognizes both effort and achievement. Incentive compensation plans come with inherent tradeoffs; they are also excellent individual motivators for employees to succeed in the workplace and contribute significantly to the financial gain of the company. Incentive compensation packages also act as a tangible form of gratitude, ensuring that employees are properly rewarded for their diligence and dedication. Unfortunately, these incentive plans do not always work.

Incentive programs require effort beyond normal job responsibilities, instead of rewarding excellent performance an execution of normal job duties. Yes, incentive plans motivate employees to earn more revenue; however, it inevitably teaches how to manipulate the system in order to obtain the desired results. In Arck’s Systems situation, Mynor noticed a discrepancy in compensation vs. productivity with Lux’s compensation package. He noted that the productivity levels simply did not match the payment level.

The top sellers at Lux made 30 times more than the average salesperson, but were only 14 times as productive. The top sellers at Arck make for four or five times more than average and are four or five times as productive. Hence, Lux’s compensation plan seemed infeasible to Mynor. Mynor’s inability to full comprehend the Lux compensation plan stems from the fact that he is used to managing a sales team that focuses on selling technical hardware, which requires knowledge of the product and is pretty much straightforward.

The sales of enterprise servers depend largely on the design of the product itself rather than a charming sales team. Conversely, selling enterprise software requires a “soft sales touch. ” It requires the sales team to be able to convince prospective clients that their software is the best option currently available on the market. The irreconcilable differences between the products inescapably demand the need for different sales compensation packages. With Arck Systems and Lux Software, Inc. operating as two separate entities this poses no foreseeable conflicts.

However, with Arck and Lux sales teams operating under one executive manager, conflicts will arise in the long run. Keeping the sales teams separate for the foreseeable future is wise because it allows Mynor to brainstorm, develop, and implement changes to the compensation packages that are fair and equitable to both sales teams. He needs time to develop a system to merge both sales teams without losing talent from either team. More importantly he needs to be able to implement these changes without negative reactions. Tweaking the compensation packages isn’t a simple task. 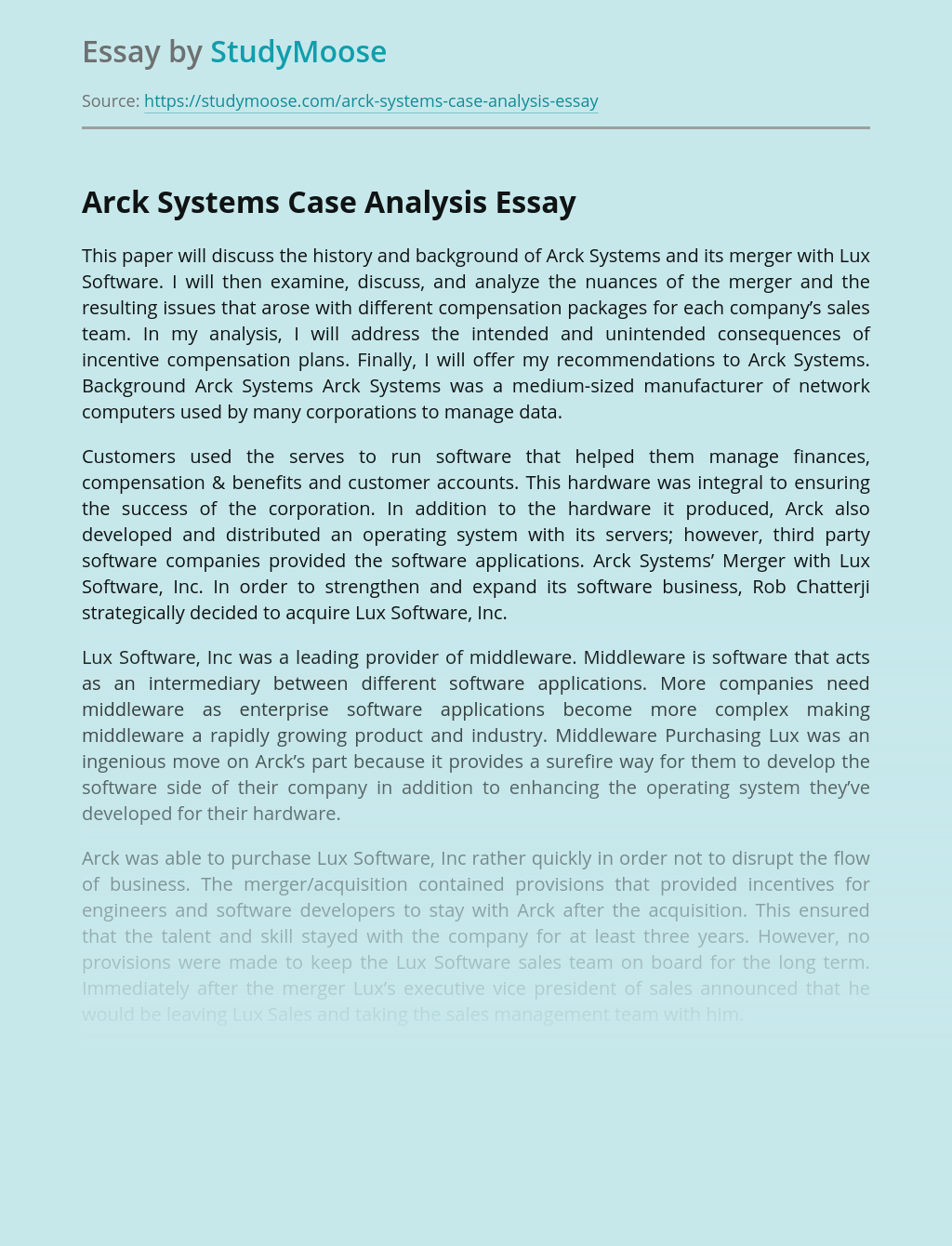 This paper will discuss the history and background of Arck Systems and its merger with Lux Software. I will then examine, discuss, and analyze the nuances of the merger and the resulting issues that arose with different compensation packages for each company’s sales team. In my analysis, I will address the intended and unintended consequences...

View sample
This is Java Projects on College Management System

The objective and scope of my Project College Management System is to record the details various activities of user. It will simplifies the task and reduse the paper work. During implementation every user will be given appropriate training to suit their specific needs. Specific support will also be provided at key points within the academic...

INTRODUCTION Today, we are living in a modern age engaged in highly computerized technology where computer devices manifest everywhere aiming to enhance individual lifestyle and most especially in the world of business. Manual operations are considered out of date and are left behind because of modern technology. Using computers and modern technology is a great...

Nowadays, rate of violence and aggression among teenagers are increased. This is one the most important problem faced by today’s parents. This has prompted feel uncomfortable by the parents when their children were less active in other areas. Based on statistics that showed by Entertainment Software Rating Board (ESRB) in 2011,that 25 % of teenagers...