Appreciation and comparison of modern and pre-twentieth century poetry

Appreciation and comparison of modern and pre-twentieth century poetry: “Cousin Kate” by Christina Rossetti and “Manwatching” by Georgia Garett ‘Cousin Kate’ is set in a feudal society. A feudal society is where there are two classes, the rulers (Lord) and the ruled (peasantry). The feudal Lord had complete power and expected absolute loyalty and obedience from the lower orders. In exchange they had his ‘protection’. In this poem there is a cottage maiden who had a happy life in medieval times.

Don't use plagiarized sources. Get your custom essay on
“ Appreciation and comparison of modern and pre-twentieth century poetry ”
Get custom paper
NEW! smart matching with writer

She was good looking but she did not realise this. The Lord singled her out and paid her attention telling her she was pretty. He took her to his palace and they had sex. The Lord started to stalk the cottage maidens cousin, her name was Kate. Cousin was chosen over the Cottage Maiden by the Lord as she was prettier. The cottage maiden fell in love with the lord. She was enticed to his palace and bore his son.

There are six stanzas in the poem “Cousin Kate”, each with eight lines, the second, fourth, sixth and eighth lines rhyming.

Christina Rossetti uses the word “lured” because it means to trap and that is what the lord did.

The Cottage Maiden on reflection regrets what happened to her. She was happy living with the peasants who were her friends and wishes that the Lord had not bother to single her out and pay her attention telling her she was pretty. There is an oxymoron in this stanza; it is “shameless shameful life”. She felt shameless because she thought it was true love, but afterwards she is made to feel shameful by other peasants because the peasants think that they are not good enough for her.

She was also made to feel shameful because to have children out of wedlock in medieval times was frowned upon, and she regarded by her neighbours as an outcast thing. She is also described as the Lords “plaything”; this means he used her. In the poem, the poet says “he wore her like a silken knot and changed her like a glove. ” This means he can use a woman for a while and then just take her off and throw her away. These two sentences are similes because they are being compared to other things. The two things that the poet is comparing with are a silken knot and a glove.

In this poem Christina Rosetti says, “she is thought of as an unclean thing, who might have been a dove. ” This is because she had sex with a man before they got married. This is a metaphor; it is also religious (purity). This is because many years ago Christian people believed that if you had sex before you got married, you were “unclean. ” The third stanza is directed at cousin Kate. She is married to the lord. We know this because the cottage maiden calls her “O Lady Kate” but she also reminds her that she is still her cousin by calling her “My cousin Kate”.

She says that her cousin grew more fair than herself so the lord change Kate over her because he only judges by looks and does not care about personality. He spied on you when you worked on the fields and watched your steps along the lane and then he lifted you from mean estate and took you to his palace to live away from your friends just like he did to me. In stanza four society looks down on cousin Kate because she now lives with the lord and she left them, so that she could be wealthier and of a higher class.

Cousin Kate would not sleep with the lord until they got married because in medieval times it was thought to be dirty and unclean if you had sex before marriage. So he bound her with a ring and they got married. The cottage maiden is classed as an outcast thing, which is saying that she had been reduced to something below a human. This is because she had sex with a man before they got married. Her friends do not want to know her anymore because she abandoned them for the lord, so why should they take her back.

She is compared to an animal not being happy by saying, “even though I sit and howl in dust”. The cottage maiden is not happy because she really did love the lord but cousin Kate did not love him. She just married him because she wanted the money. In stanza five the first two lines show that cousin Kate did not really love the lord. It says that her love was writ in sand, which means that it can easily blow away. He fooled me but did not fool you. The cottage maiden accuses cousin Kate of being bought by the lord because she wanted more money and to be of a higher class.

She says he would not have won her with his love or bought her with his land because she was her cousin, and she would have back into his face and she would not have married him. I would not have married him because I knew I would be upsetting you, but you went through with it even though you knew that I loved him and had feelings for him. In the last stanza the cottage maiden boasts about having a baby because cousin Kate does not have any children, and any gift that the lord gave her cannot be as good as the gift I have got.

This means it is not likely that cousin Kate is likely to have children. There is an oxymoron in this stanza, it is, “My shame, my pride”. This means that the baby is illegitimate, so it is shameful that she had the baby the way that she did, but it is her pride and she loves it. She hugs her baby for safety. There are two meanings for this. They are: – She could do it because it is an asset or because she is worried that the lord will come and steel it from her. The lord would give anything for an heir to his throne.

Appreciation and comparison of modern and pre-twentieth century poetry. (2020, Jun 01). Retrieved from https://studymoose.com/appreciation-comparison-modern-pre-twentieth-century-poetry-7849-new-essay 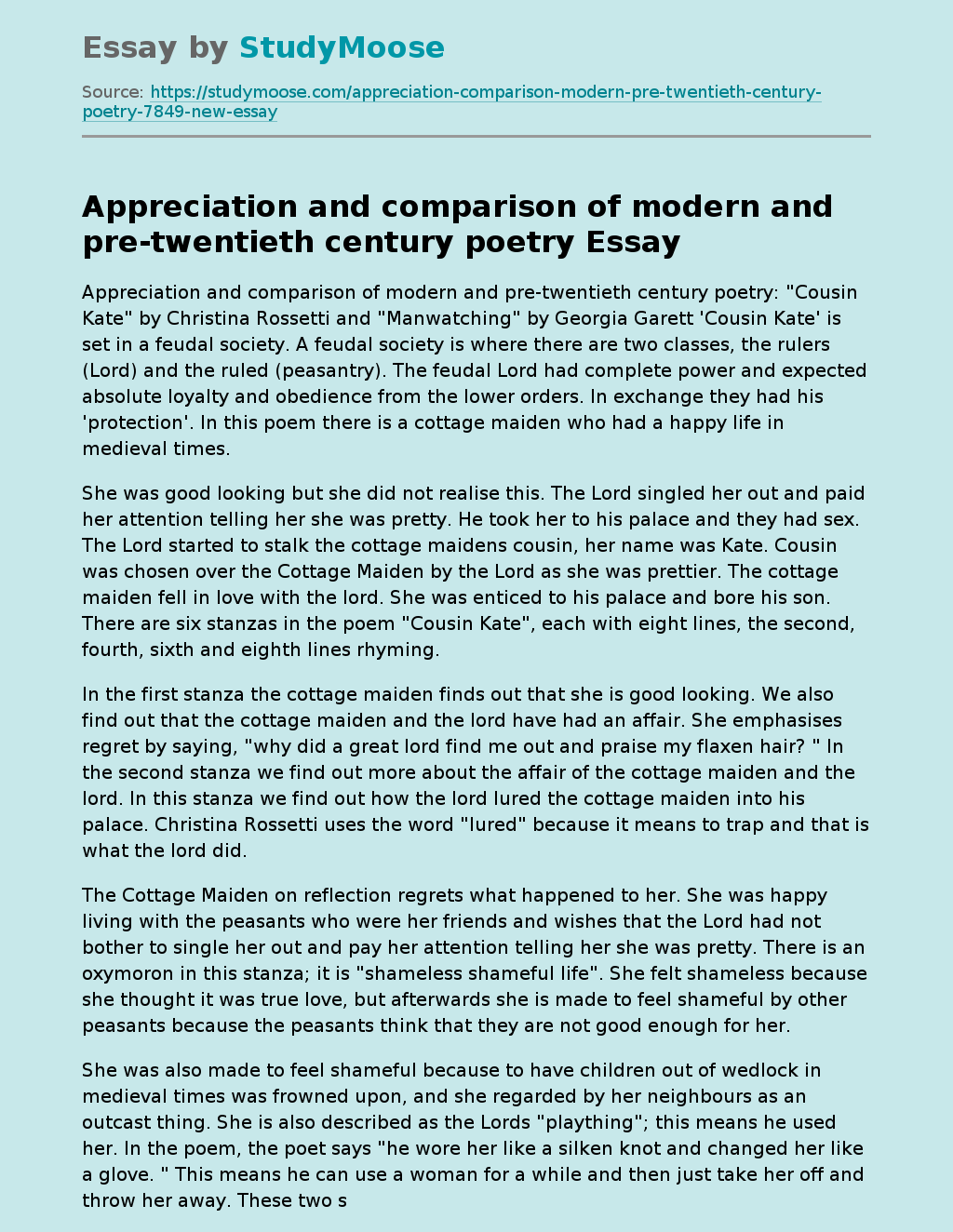