Life is a beautiful gift from God, death comes after life. Death is meant to come without notice, There’s a saying “you never know when it’s your time to go “. Should one make a decision to end his or her life, to terminate pain and suffering cause by a severe illness? Physician assisted death is an outgoing dispute throughout the world, many will never come to an agreement on. Philosophers explain many different theories that are used to determine logic and reasoning beliefs.

Don't use plagiarized sources. Get your custom essay on
“ Applying an Ethical Theory on Assisted Death ”
Get custom paper
NEW! smart matching with writer

Deontologist states that it’s a moral duty to support and sustain life and assisted suicide should not be allowed. I agree with Deontologist point of view I believe it is immoral for a Physician to assist a patient in death. Throughout this essay I will examine the deontological perspective on physician assisted suicide.

Deontologist argue to sustain a life is moral and is immoral to end a human life no matter what the situation may be.

“It is important to remember that deontologists do not deny that acts have consequences; their point is that those consequences should not play a role in evaluating the act’s morality. Rather, deontological ethics focuses on the will of the person acting, the person’s intention in carrying out the act, and particularly, the rule according to which the act is carried out. Deontology focuses on the duties and obligations one has in carrying out actions rather than on the consequences of those actions (Mosser, 2013). To make a decision to end your life can be caused by being pain and suffering .

Another cause can be family or friends persuading by saying ending your life is the best way to relieve pain. Deontological theory believes Physician assisted is committing suicide because a life is ending and not being preserved.

“Many argue that a compromise is to continue to develop drugs and other forms of palliative care—treatment that reduces suffering—to alleviate a terminally ill person’s anguish. Utilitarianism ethical theory “When given a choice between two acts, utilitarianism states that the act that should be chosen is the one that creates the greatest amount of happiness for the greatest number of people”(Mosser,2013). Assisted suicide will not create the greater number of happiness. Ending a life is never happiness loved ones are in pain to see a love one suffer and in even more pain to watch their life end. “Both utilitarianism and deontology have certain advantages. Utilitarian calculations are, at least at first glance, fairly easy to devise and provide a quick way to evaluate the moral worth of an act. Deontology, on the other hand, has the appeal of being easily explained and develops rules that seem to make sense and are also widely applied”(Mosser,2013).

I believe Deontology theory is most effective in assisted suicide, for example if a patient suffered for ten years with cancer and five doctors agree to stop treatments, but two doctors are willing to continue treatment ,Utilitarianism theory would stop treatment because the greater number rules. Deontology theory would evaluate what’s the best decision over all. Happiness comes from the heart, there are many different programs design to help the severe ill one is hospice,”The hospice movement emphasizes the reduction of end-of-life suffering and promotes death with dignity, and it has thus become an increasingly attractive option for those who resist endorsing PAS” (Mosser, 2013). It is important that all medical staff and professional properly analyzed a patient for making a decision end of life intervention.

Assisted suicide requires strict specific steps to follow, In Oregon PAS is legal. The patient must be a resident of Oregon and must have 6 or less months to live .Patient must also consent verbally and give written notice to end life. Although the patient is giving more than enough time to make the decision to end their life, ending your life is a bias choice, life is precious. Pain and suffering can be temporarily why make a choice that God has last say so to.

Physician-assisted suicide cause love was to lose faith it will also prevent doctors from taking extra steps to save a life. Miracles happen on a daily basis, a blind man can vision is now clear, the man who once was in a wheel chair can now run faster than he ever could .I am a firm believer that God has all power to around any situation. Making a choice to end a life is never a choice of a human . Although many may not agree with Deontological theory, to sustain a life vs ending a life is the moral way of life. 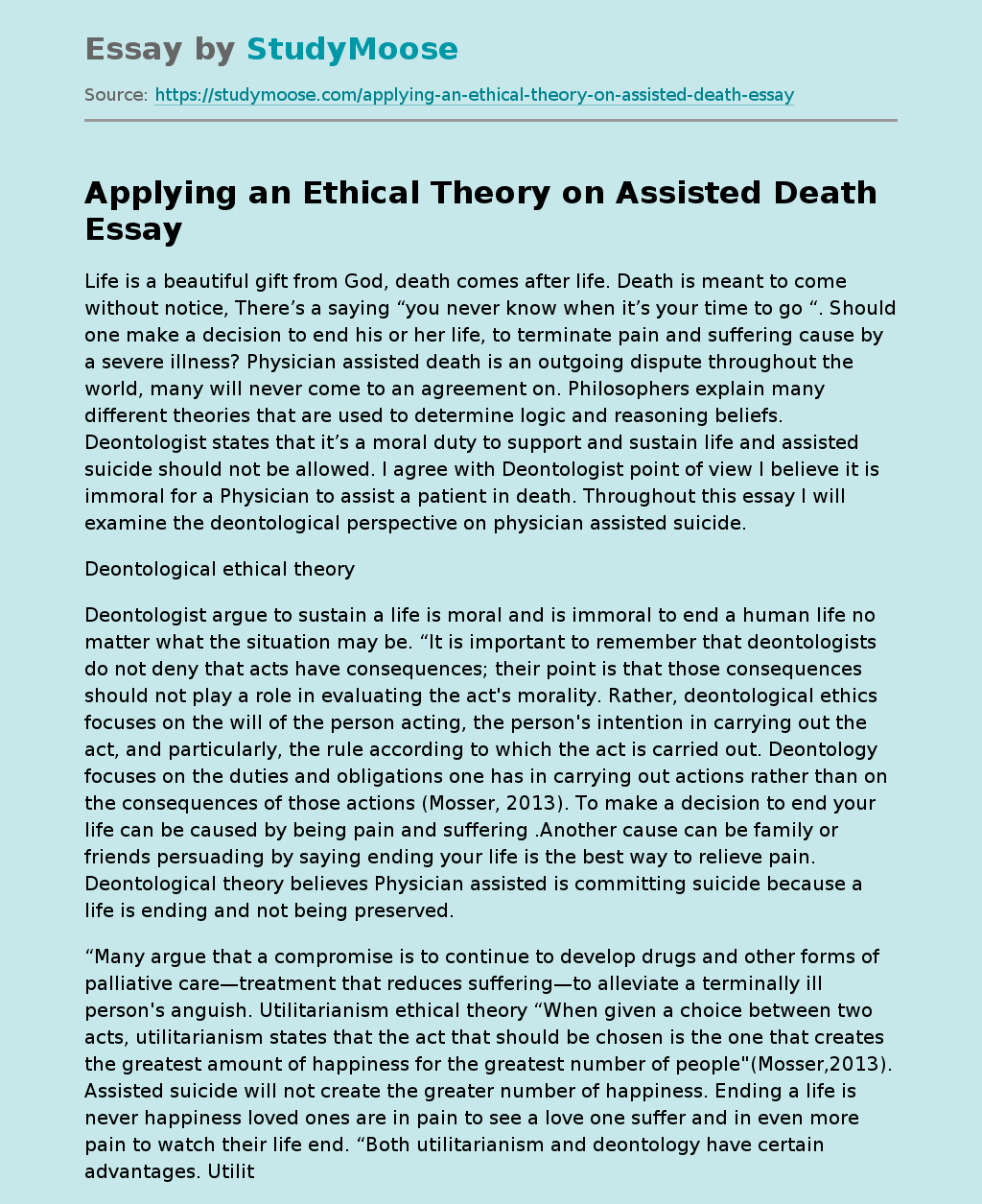