Bodiam Castle is situated beside the River Rother in East Sussex.

On my visit to the castle I took time looking at the flowing river which was not as I expected. The river seems to have got smaller over the years, irrigation. The river would of had to be wider in the past for boats to past. But as the years have past the river has been over grown and reduced in size.

A veteran of King Edward III’s wars built the castle in the late 14th century with France, originally as a coastal defence.

Don't use plagiarized sources. Get your custom essay on
“ The appearance of Bodiam Castle is exactly how most people imagine a medieval castle should look like ”
Get custom paper
NEW! smart matching with writer

In 1385, Sir Edward Dalyngrygge was given permission to fortify his house against invasion from France, but then decided to build a new stone castle a short distance away from the house. What can be seen today is a relatively small, picturesque building that symbolises the movement from traditional medieval castle to comfortable manor house.

The picture to the left enables you to see the water gate between the two towers. Arrow slits can be seen clearly positioned all over the castle especially on the towers for views all around the castle.

The picture to the left shows a gun loop. When I visited the site I was able to go and see through the gun loops and I noticed that the view from them was very restricted. It had a thick-rimmed edge that would have made shooting at an angle very difficult.

I don’t think they could have been used in battle and that they were there purely for show.

The drawbridge that would have been there but has rotted away would have been raised by beams above the gate. A good defence for a castle along with the entrance door itself. Heavily studded with iron bolts, came to be placed in a massive gatehouse.

In the picture to left the door can be seen.

With an almost square construction, Bodiam Castle has a notable symmetry and is surrounded by a wide moat. The moat was created from an artificial lake, which, in turn, originated from allowing the river to flow into a rectangular area of marshy land. The moat surrounding the castle adds to deco and elegance of the castle.

The picture below shows the moat at its best.

The fortifications were never tested to any degree, although during the Civil War the interior of the castle was virtually gutted. After surrendering, Bodiam Castle was then left to deteriorate until the early 20th century.

The construction of Bodiam Castle appears to have been a perfect combination of medieval defence strategies and remarkably comfortable accommodation, creating a magnificent fortified building in an idyllic rural location.

Bodiam castle was built as a courtyard castle.

The plan below illustrates the castle as it was originally.

The exterior walls are decorated with three family crests implying a home of such families.

Shown to the left are the crests.

Bodiam looks so perfect and picturesque; this may not be by accident for many people have debated whether the castle was really built as a defensive fortress or as an elaborate stately home.

Inside decorative windows, fireplaces and ledges show the castle was used as a home for people of the time.

The picture to the left is a chapel window; you can still see the artwork on the frame.

The inside of the castle contained three kitchens, a great hall and the well.

To the right you can see the well; the only source of clean water. On the next page cut away 1 on shows the classic medieval plan. The hall is shown furnished with stripped hangings and a tiled floor. These are both characteristics of rich interiors of the time. Cut away 2 shows a reconstruction of the inner apartments in the east range. It shows the rooms decorated with “varying richness” to reflect their importance.

The pictures are from the National trust Bodiam Castle book.

Source A tells me that Bodiam castle was built as a “dual purpose” castle. I would agree with this as I have seen evidence of this at the castle itself. I saw kitchens, stables and bedrooms. The source continues to say that both residences of the castle as well as the soldiers could have used these facilities. “Both the lord and his bailiff were knights… so could a solider be a steward and a castle a house”. This indicates that source A doesn’t take sides to whether it was a military built castle or domestic built castle. According to source A Bodiam castle was “dual purpose” castle assisting both the residences and soldiers.

Source A suggests “the hallmark of the late 14th Century planner”. From my previous research on castles the idea is supported by the idea of a courtyard castle being an integrated plan, which solves the domestic and military problem in a single architectural conception. If you look back to page 3 you will see the courtyard castle plan. The evidence from the site that supports this is the layout of the castle, all shown in the pictures on page 5. They include the kitchens, stables, chapel and bedrooms.

According to source B the castle only looked defensive from the outside. The interior was more domestic. Proving the castle was almost a fake, misleading. A good cover up for outsiders. Source B also suggests that it was purely “tongue-in-cheek-bluff”, but if this were true why would there be murder holes and other defensive features in the castle. The only answer to this is that they were built to be used as a precaution if needed.

Source A says it was built for a “military role” then goes on to say “nevertheless” it was a “house fortified”. This backs up the “dual purpose” phrase used towards the end of the source. Source B says “inadequacy of the defences”. Both showing different opinions.

I feel that having visited the castle source B is talking about the south side, which clearly isn’t defended as well as the north. Unlike the north side the south side of the castle doesn’t have the same amount of defence e.g. there is no drawbridge or any defensive features to prevent attacks from abroad.

The sources are different and the opinions appear apparent as source A was written a long time ago, 1964 by a reliable, specialised person part of the Royal Archaeological Institute. Source B was written much later in 1995, by a reputable magazine for “History today”. The writer could have exaggerated his biast opinion to get the readers more interested in visiting the castle today.

Evidence from the National Trust booklet and from what I saw at the site I would say that there are roughly the same amount of features for both military and domestic features in the castle. Of which some are linked in some way for example, the family crests (shown on page 4) are both domestic as they show the family name of who is staying in the castle and also military as it could be the soldiers crest symbol that represents them. Another example of the features being linked is the kitchens. The military role would be that there were 3 in total as it could be they were to small to cater for all the soldiers but the domestic role would be that there were three separates kitchens for the royalty in the castle i.e. the lords then one kitchen for the soldiers and the other for the servants to cook in.

The picture to the left shows the (murder) drop holes.

Below is shown the high ceilings of which are decorated beautifully.

The appearance of Bodiam Castle is exactly how most people imagine a medieval castle should look like. (2020, Jun 01). Retrieved from https://studymoose.com/appearance-bodiam-castle-exactly-people-imagine-medieval-castle-look-like-new-essay 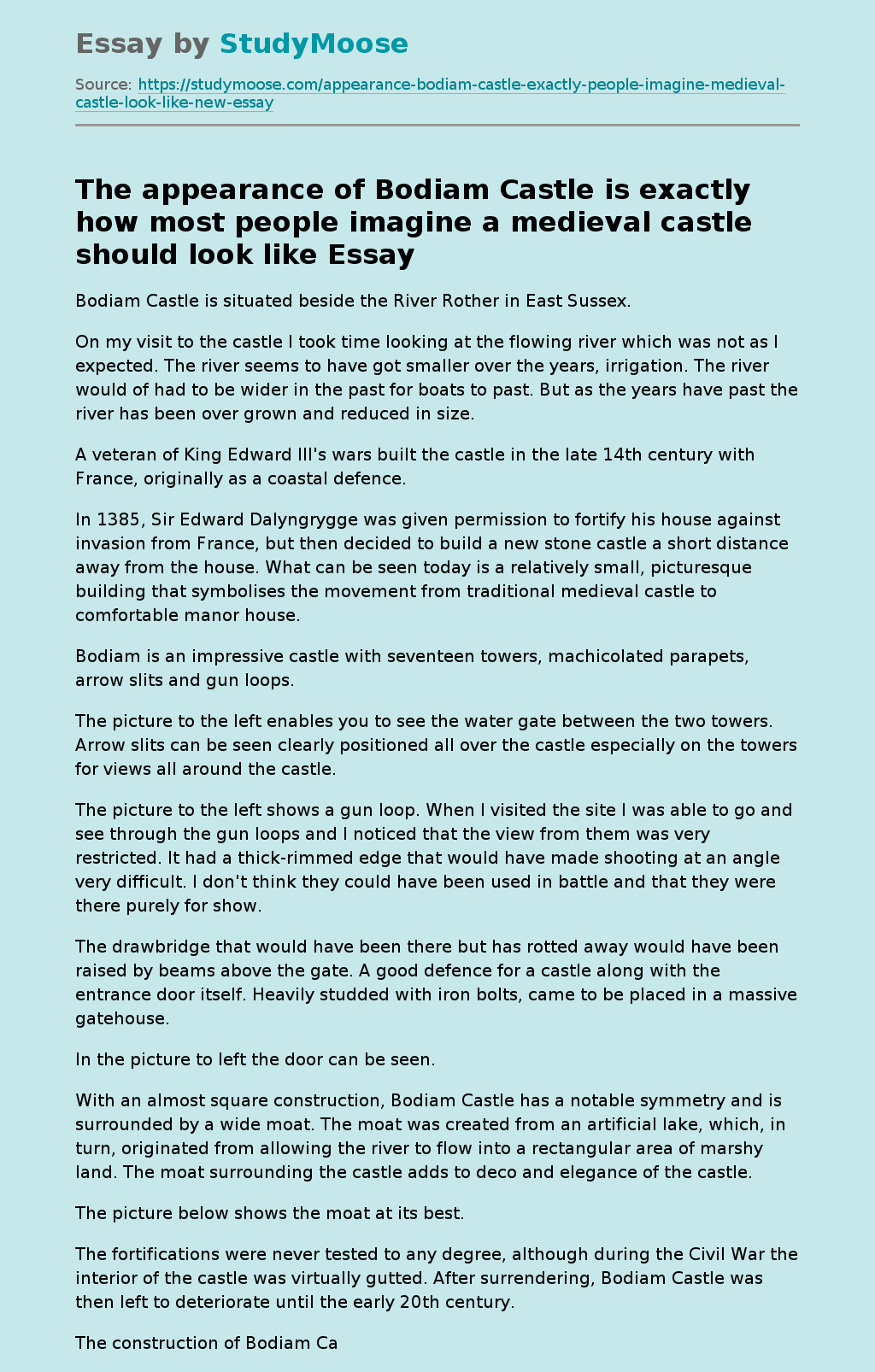