Appearance and Reality in the School for Scandal

The School for Scandal is a dramatic play written by Richard Sheridan. In this essay i’m going to discussed Appearance and Reality . There’s a characters who represent the false appearances and the really appearances. The School for Scandal’s member are the trust appearance and they distant reality. There’s a dramatic element like the disguise of Sir Oliver in his trial test on Joseph and Charles. We have the two brothers, Joseph Surface and Charles Surface. The dramatic tool used to know the good brother.

Turn in your highest-quality paper
Get a qualified writer to help you with
“ Appearance and Reality in the School for Scandal ”
Get high-quality paper
NEW! AI matching with writer

And also the dramatic irony in the scene screen (the culmination of the play).

The School for Scandal is formed by hypocritical characters. On the one hand Lady Sneerwell (young widow. She is attracted to Charles Surface and plots with Joseph Surface to break up Charles and Maria) , Lady Teazle (Young wife of Sir Peter. She and her husband have their little spats), Joseph Surface (Who pretends to be an honorable gentlemen but It is the bad brother.

) and Mrs Candour (A professedly kindhearted woman who speaks well of everyone in such a way as to ruin their reputations in the process. ). They are the appearance. On another hand we have the real characters.

Sir Peter (Husband of Lady Teazle)and Sir Oliver Surface (Charles and Joseph’s uncle) and Charles Surface (really the good brother). Mrs. Candour and her love of gossip make her one of the most scandalous pupils of all; her true sentiment is seen only through the false accounts of others which she delivers to any listening ear, often using metaphors of money.

If a scandal were to take place, she could risk losing it all, whether reputation or wealth. This can be seen as foreshadowing the fate of Joseph; he took such care to secure his financial success, and one scandal ruined it all.

The object of Joseph’s financial success, Maria, who possesses neither a “screen” nor an interest in spreading lies, is greatly affected by the change in Lady Teazle, as it consequently means that her unwilling role in the scheme is over. Charles Surface has a reputation as a scoundrel. But beneath his flawed veneer, he is a decent fellow. Joseph Surface has a reputation as an upright man. But beneath his flawless veneer, he is a villain. Joseph Surface is appearance and Charles Surface is reality. Joseph is the bad brother and Charles is the good brother.

Joseph lies because he wants the fortune of Maria and he wants to marry Maria for economical interest. Sir Peter and Sir Oliver want to discover the truth about the two brother, Charles and Joseph. (the reality). There’s a dramatic tool here. The disguise. Sir Oliver disguises and he makes a trial to Charles (for he known as Mr. Premium) and Joseph (for he known as Mr. Stanley) to know who is the good brother. In the scene screen, Joseph seizes upon Lady Teazle’s discontent with Sir Peter to mount a subtle argument that seeks to rationalize and justify adultery.

Once the deception of hiding Lady Teazle behind the screen is in place, Sheridan fully exploits its potential for ironic double meanings and double dealings. The School For Scandal draws a humorous picture of an unfortunate reality; that many people will do anything to further elevate their characters, even if it means hurting friends and family. The characters of the play are willing to construct elaborate “screens” of sentiment in order to deceive those around them and increase their own wealth.

Appearance and Reality in the School for Scandal. (2016, Nov 20). Retrieved from https://studymoose.com/appearance-and-reality-in-the-school-for-scandal-essay 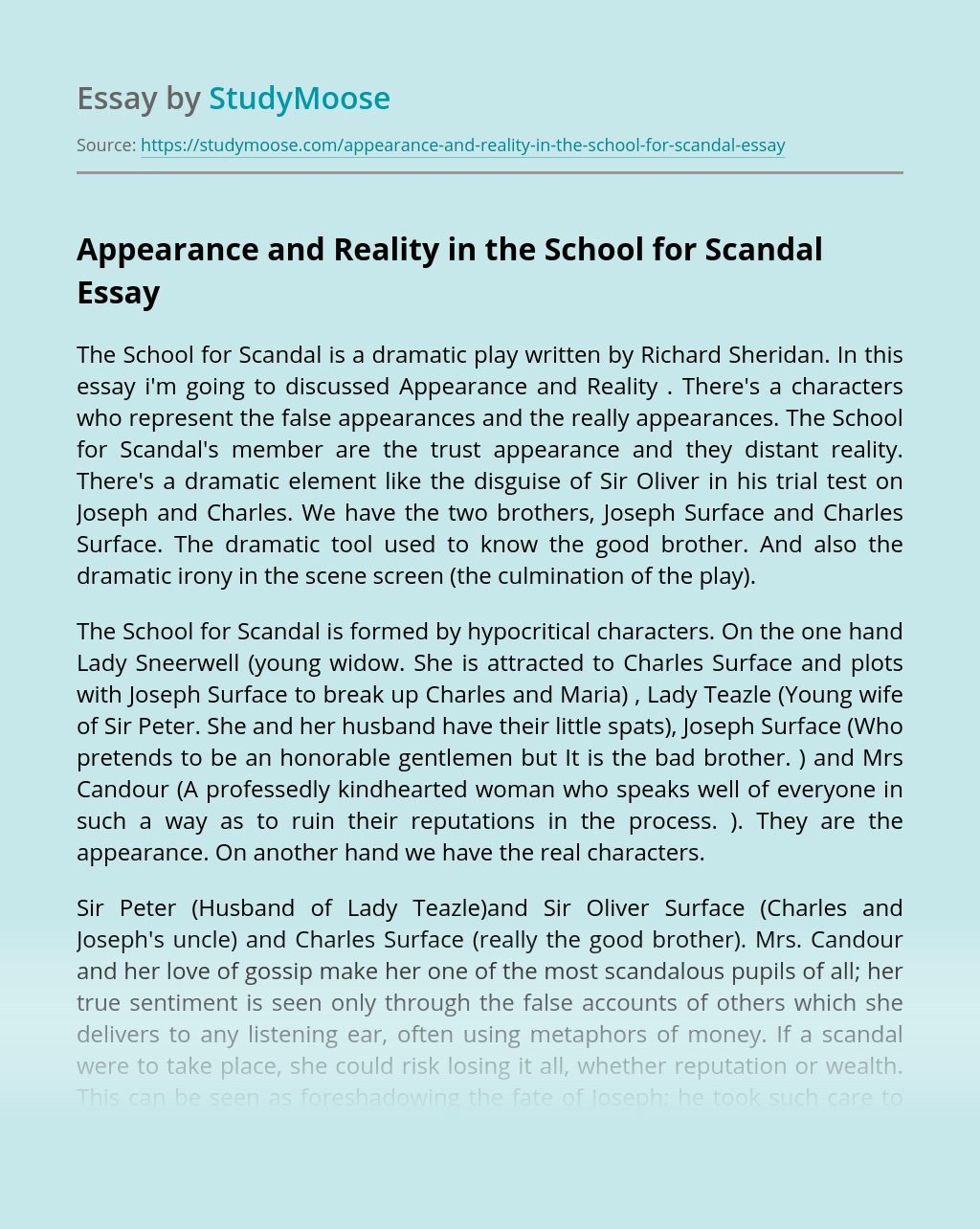 Turn in your highest-quality paper
Get a qualified writer to help you with
“ Appearance and Reality in the School for Scandal ”
Get high-quality paper
Helping students since 2015
Stay Safe, Stay Original