Throughout life we are constantly seeing new perceptions of things and in turn constantly changing our perception of reality. The Key concepts of Appearances and Reality were explored through the use of Paradox, Point of View and Verisimilitude, within the texts The Truman show (Peter Weir) and Relativity (Escher). These concepts were used to effectively portray the key differences, and deeper meanings of Appearance and Reality. The way in which we view an object, situation or concept, greatly affects how we interpret its reality.

Get a verified writer to help you with Appearance and Reality

This concept is explored by using Point of view to change the viewer’s ideas about the True reality of within the Truman show. The whole idea and notion of our reality is based upon what we see, what we grow up with. We learn from a young age what we see isn’t always the truth, and therefore we adapt our reality to what we already know. This is the same for Truman Burbank, a 33 year old average man.

He is the unknowingly star of a television show all of his life. Everything he does and says is recorded and televised uninterrupted 24 hours a day, 7 days a week.

Like us Truman has never questioned his life as his point of view has never been given the opportunity to change. That was until a series of incidents occurred that changed his Point of view. A key change in Truman’s point of view is when a series of onset glitches lead him to see a different reality that clashes with what he knows.

These events lead him to become erratic and quite demented (Evident by the erratic car trip with Meryl), eventually leading to a point where Truman has Meryl by the throat with a set of dicers and Meryl screams’’ Somebody do something’’.

This quote leads Truman to the core belief that there is something wrong with his reality and that he will not stop until he finds out what is real and what is not. This eventually leads him to the point in which he leaves the T. V set and has discovered the through a new point of view his true reality. This is Through the use of Point of view; the audience is able to observe how changing views can lead to a new reality. Reality or the Truth can be very hard to identify from an Appearance.

The concept of Verisimilitude is very evident in Escher’s Relativity through the use of conflicting images and vectors to reveal the hidden truth. Escher’s relativity is an image that at first is very perplexing. A series of staircases intertwined in what appear at first to be impossible. The image can actually be viewed in different points of view, each of which changes the intention of what is real, and what is not within the image. E. g. persons are waking up/down a staircase and when the image is rotated, they are now walking upside down and defying gravity.

The way, in which we observe it at any angle, an object within the image is wrong. The almost impossible picture, riddled with false appearances has still got reality within it. Using verisimilitude we are able to see that although the image has several false appearances, one of them must be the true reality, otherwise the image could not exist. The problem for the viewer though , is how can we judge one false truth as more real than the other, this means that no matter what our first appearances are always not going to reflect the true nature of the reality around us.

The Truman show explores the Paradox of appearance and reality, and how that changes our final point of view towards a situation. In the Truman show we start off with the interviews of the cast, this is our first insight into how the show operates. A key quote which sets a paradox within the film is when Truman’s best friend Marlon says ‘’Nothing you see on this show is fake. It’s merely controlled’’. This is contradictory to the very nature of the show, it’s a show which is meant to have the Truth in it, e. g. (TRUE MAN), he is the reality of the show and yet his reality is a false appearance.

How we never question the nature of reality is also explored when Christof the director says ‘’ we accept the reality with which we are presented’’. This is another paradox as we explored before a false reality is also representative of the truth. Truman himself is accepting of the reality he is presented because he initially never had a reason to change his point of view. But through the film the paradoxes of the false reality and the Truth clash, revealing a deeper truth, which is revealed at the end of the film to Truman.

The use of a Paradox to reveal a hidden truth between Appearance and reality is effective within the Truman show as it allows the Audience to change their point of view and observe how it is changed in others. The composer Peter Weir (The Truman show) and Escher (Relativity) both used Point of view to change the perceived reality of the persona and the viewer. Paradox and Verisimilitude are both mechanisms for the changes towards a true reality and are used by each composer to explore effectively the differences and similarities of Appearance and Reality.

Get a verified writer to help you with Appearance and Reality 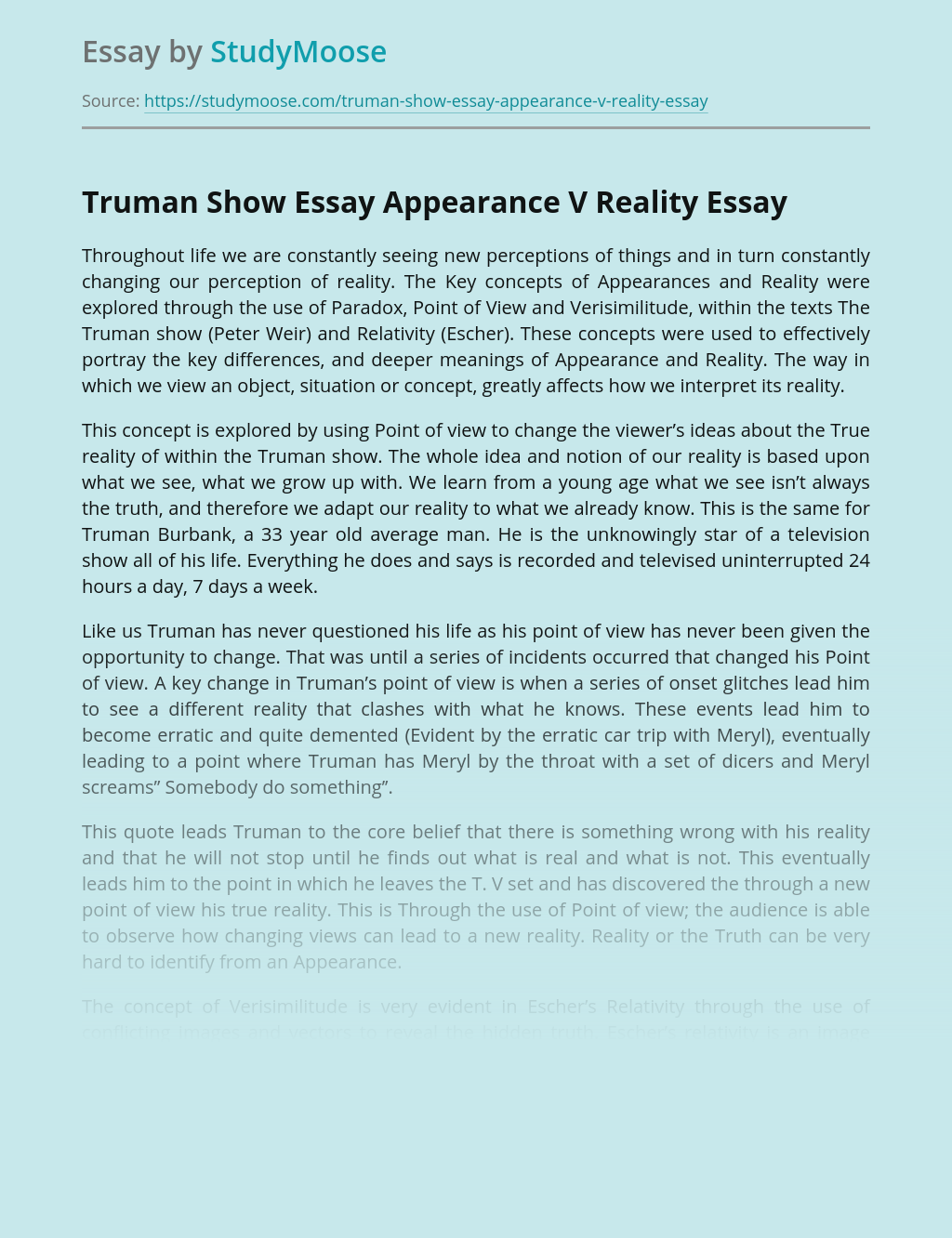 The End Depends Upon The Beggining

“The end depends upon the beggining.” St. Benedict Shool for Boys’ headmaster reiterate these words in the beginning of the film The Emperor’s Club, reminding the freshman boys of the school’s philosophy. This they are supposed to put to heart as they go through their journey in school. The statement empasizes the importance of the...

Journey As The Transformation Experience

It is the journey, not the arrival, that ultimately transforms the traveller – particularly for imaginative journeys, which often occur spontaneously and is undecided in its destination. The experiences one encounter during their travel/travail is what evolves them to better understanding of themselves and the world, inspires them to spiritual reform, which constitutes the educative...

Get Essay
Appearance Vs Reality in Truman Show

Throughout life we are constantly seeing new perceptions of things and in turn constantly changing our perception of reality. The Key concepts of Appearances and Reality were explored through the use of Paradox, Point of View and Verisimilitude, within the texts The Truman show (Peter Weir) and Relativity (Escher). These concepts were used to effectively...

The Film Theories of Eisenstein & Bazin

Principles like those Parmenides assumed are said in contemporary jargon to be a priori principles, or principles of reason, which just means that they are known prior to experience. It is not that we learn these principles first chronologically but rather that our knowledge of them does not depend on our senses. For example, consider...

Existentialism provides a moving account of the agony of being in the world. The spirit of existen- tialism has a long history in philosophy. But it be- came a major movement in the second half of the 20th century. Existentialism is not a systematic body of thought like Marxism or psychoanalysis. Instead, it is more...

Every so often, a film comes along that shocks people and forces them to acknowledge issues and realities that are normally taboo in open society and are fodder for conversations with therapists. The film “Fight Club” (1999) directed by David Fincher is just one of these films. How do people react when challenged to question...

The Rise of a Superstar Proficient

The Rise of a Superstar Proficient in stealing almost every scene he appears in, through his screen intensity and polished delivery he regularly displays while performing, Samuel Leroy Jackson really has all the reason to place himself softly in the group of lauded leading men in Hollywood. His work on a number of projects, either...