Planet of Life: Apes to Man is narrated by Stacy Keach, presented by Discovery Channel. A must see documentary regarding the Theory of Evolution. Originally produced for Discovery Channel, each episode covers a separate chapter in the biography of the world. This episode examines the evolution with the use of computer animation. The film talks about how apes like Lucy, who is known to be a three million year old ape that walked upright or with two legs and revolutionized or grew and changed into one of the modern men and women who populate the world in every continent, nation and city today.

The first stage in evolution is walking upright or with two legs just like Lucy did. The second is having the ability to speak or make different kinds of sounds. This is the cause of the straightening of the spine which allows the neck to follow for them to be able to speak.

One hundred million years ago, dinosaurs walked the earth.

They no longer exist today because of the asteroids that hit their home and eventually killed all of them. The earth, after some time, regained its life forces because some small creatures that got through the great tragedy that put an end to the era of the dinosaurs. One of those creatures that survived were the purgatorious, one of earth’s oldest primates that may have evolved throughout the ages

A new era of animals rose to the occasion to a new beginning and to starting a new kind of living amongst the changed world around them.

One particular creature happened to explore and discover new things in its surroundings more advanced than others. In the late 18th century, Charles Darwin wrote a book called “Origin of Species”. The book was intriguing. People thought he was losing his mind because most men and women during his time were very religious and really close to God. They didn’t believe him until a team of French-American researchers in the year 1974 found evidences of early apes.

But by that time I think Darwin’s unlikely friends and haters won’t be able to say it in front of him. The people who found Darwin’s inspirational evidence called it “Lucy”. Lucy is a 3 million year old ape and is the very first one to walk upright or with 2 legs because according to the researchers she had wide hips like humans do. Archeologists say Lucy walked like a modern pig mea chimpanzee and bonobo.

After a few decades, Lucy got to the second stage of evolution. And that is having the ability to speak or make different kinds of sounds. This is the cause of the straightening of the spine which allows the neck to follow for them to be able to speak and the rest is history. What Lucy became is what all of us are now.

Evolution has really helped and changed every individual for the better. It made us realize and understand how the real world worked in the early ages and how it affected all of us today. We are now where we belong and that gives everyone the chance and the blessings they deserve.

Personally, I do not believe in this theory as per the teachings in the Bible. There is no contest to what the Bible says about us being formed in the image of God. But, for arguments sake, and if I were to believe it, let me just say that Darwin may have misconstrued the facts or the things he has observed based on the physical and genetic similarities of man and apes. He based his findings on the fact that because apes were able to walk upright, we are their descendants and from other scientists’ findings on the similarities of man and apes from different eras.

Other important human characteristics – such as a large and complex brain, the ability to make and use tools, and the capacity for language added to the basis for his theory. Early human fossils and archeological remains offer the most important clues about this ancient past. These remains include bones, tools and any other evidence left by earlier people. Usually, the remains were buried and preserved naturally.

A tornado flew around my room before you came
Excuse the mess it made, usually doesn’t rain
In Southern California, much like Arizona
My eyes don’t shed tears, they pour

Or do you not think so far ahead?
‘Cause I been thinkin’ ‘bout forever (Oooh)

Or do you not think so far ahead?
‘Cause I been thinkin’ ‘bout forever

And I remember, how could I forget
How you feel
And though you were my first time
A new feel
And it won’t ever get old,not in my soul,
Not in my spirit, keep it alive

Or do you not think so far ahead?
‘Cause I been thinkin’ ‘bout forever(Oooh) (2x)

Apes to Man (Reaction Paper). (2016, May 28). Retrieved from http://studymoose.com/apes-to-man-reaction-paper-essay 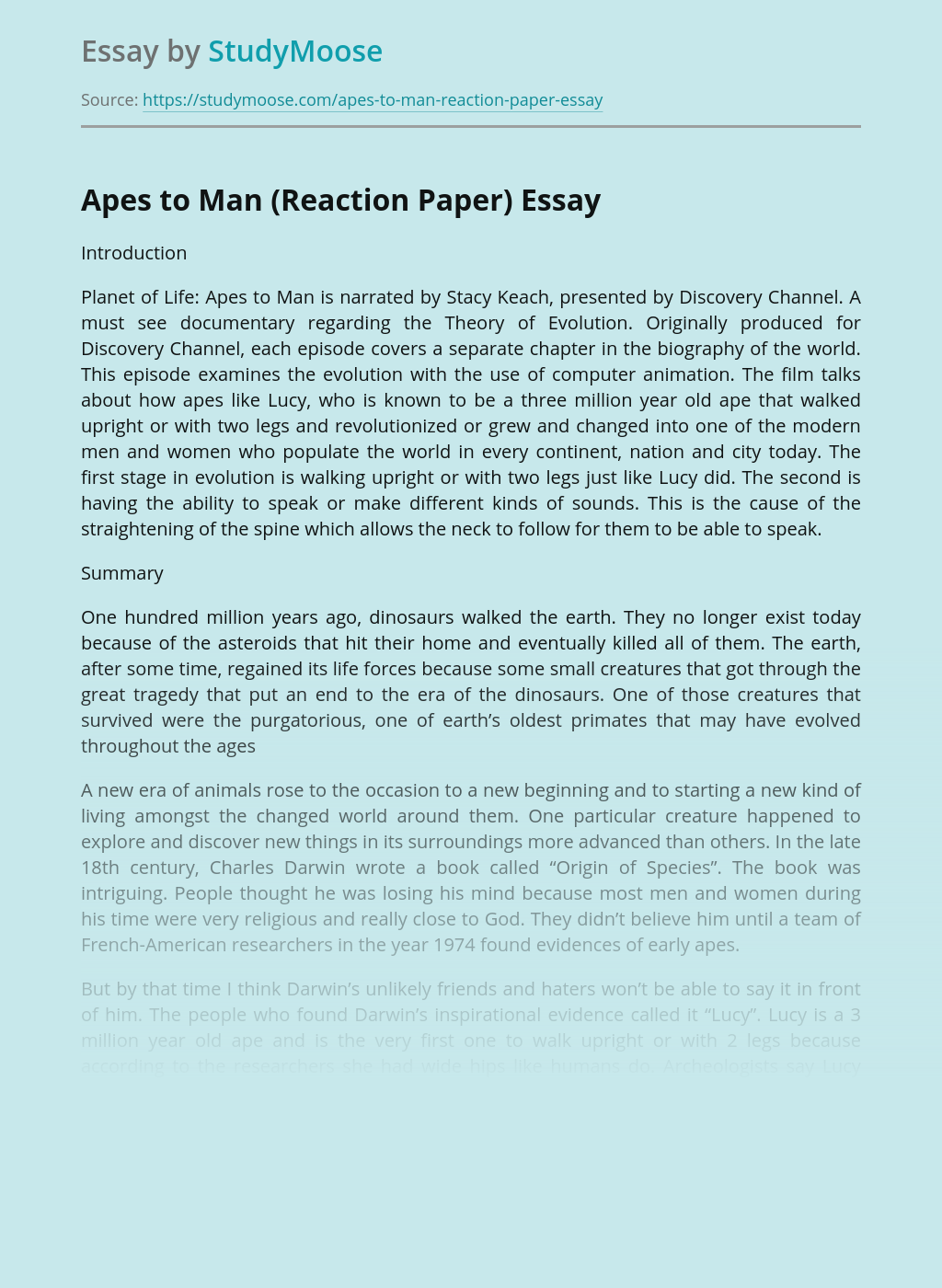