Anxiety Disorder is a condition that is diagnosed as the disability to cope with any form of stress. Since it is one of the most common disorders in the U. S. , there are a large amount of people that have and will need to control this illness. As one of the many people in the world, Victor, the main character in Frankenstein by Mary Shelly, had such a severe case of anxiety that he was almost driven to insanity. During the story, you follow his battle with this disorder.

Don't use plagiarized sources. Get your custom essay on
“ Anxiety and Victor Frankenstein ”
Get custom paper
NEW! smart matching with writer

He had a constant obsession with trying to get away from the creature, and was overly stressed about this monster that he had created that ultimately he couldn’t deal with his actual problem at hand. Anxiety disorder is extremely difficult to deal with, but if the proper steps are taken, it is treatable. This illness was first recognized by Sigmund Freud in the early 1900’s but was only diagnosed as a diagnostic entity in 1980 (Overview of Generalized Anxiety Disorder, Snow).

Freud found the illness while he was working with a companion, Wilhelm Fliess, at the very start of his psychoanalytic work, which is discovering repressed conflict inside the head (enotes. com). This discovery the two made has explained the feelings that many people feel on a daily basis. There are an abundance of symptoms associated with Anxiety Disorder. Though the most common effects are insomnia, appetite changes, depression, and a feeling of being unsettled or disconnected. Insomnia is a disorder that makes it difficult to fall asleep or to stay asleep after falling asleep (Medical-Dictionary.

One appetite change issue can include overeating, also known as bingeing. Since those diagnosed with this disorder can get easily stressed, many just eat to hide their pain or nervousness. This also applies when people under-eat. Their fears can get in their way of their appetite. Depression and Anxiety often go hand in hand (ADAA. org). Many people who suffer from anxiety disorder tend to regularly feel overwhelmed (anxietycentre. com). This means that the slightest problem can become a huge deal for them. They often become stressed and can lead to other feelings of unsettledness or being disconnected.

It is possible for these victims to visit a doctor more often and also feel uncomfortable in many social situations (anxietycentre. com). Anxiety Disorder is listed as the most common disorder in the United States (ADAA. org). It affects over 40 million adults in the U. S. (18% present of the population), but only 1/3 of those people are actually being treated (ADAA. org). Out of those even being treated, only 400,000 will be treated properly (ADAA. org). 22. 8% of those diagnosed are said to have a “severe” case (NIMH. NIH. gov).

People who are diagnosed with Anxiety Disorder have a higher chance of drug abuse or using alcohol as coping method (anxietycentre. com). It was tested and results showed that women are 60% more likely to be diagnosed with Anxiety over men (NIMH. NIH. gov). Those who are diagnosed have a number of possible treatments. They range from different prescription drugs, antidepressants, anti-anxiety medication and beta-blockers are the most common listed (NIMH. NIH. gov). Antidepressants have some side effects, for example, blurred vision, headaches or nausea.

Psychotherapy is also used to help treat Anxiety Disorder. A lot of people diagnosed could be hospitalized or go to regular counseling for help with coping with the stress. But the success of treatment may vary; some people might take weeks while others take months or years. For this reason, treatment must be tailored to the specific patient. There are a couple of risk factors that also come with Anxiety Disorder. The affected person might develop extremely low self-esteem which later could lead to depression. As humans, we rely on the thoughts of other people to determine how we feel about ourselves.

Since it is not necessarily “social acceptable” to have an Anxiety disorder, many people feel left out or alone in the case that they do have the disorder. Those who are higher accepted with people generally have a higher self-esteem (gad. about. com). Extremely low self image problems can often lead to depression (psycologytoday. com). Also, since many people use alcohol to cope, alcoholism is also a common result of anxiety. A study was formed in South Carolina with people who suffer from severe anxiety. They were all tested to see when they mostly drank alcohol.

The study found that a significant amount of people used the alcohol to cope in larger social situations. Also, they found out that drinking lowers the rate of anxiety and relieved many of those tested from their discomfort (nih. gov). As stated by the National Library of Medicine, panic attacks are when you have common attacks with the fear that something bad will happen. These are commonly found in those who suffer from Anxiety Disorder. All of these factors could be treated and controlled with the proper care. In the book Frankenstein, by Mary Shelley, Victor Frankenstein created a creature that he himself was too terrified of.

This creature had caused Victor to show symptoms of Anxiety Disorder. He experiences fevers and severe illness because is stressing out about the creature and the things it has been doing. “With an anxiety that almost amounted to agony, I collected the instruments of life around me, that I might infuse a spark of being into the lifeless thing that lay at my feet. It was already one in the morning; the rain pattered dismally against the panes, and my candle was nearly out, when, by the glimmer of the half-extinguished light, I saw the dull yellow eye of the creature open; it breathed hard, and a convulsive motion agitated its limbs. (Frankenstein, chapter 5) Victor is clearly in a great amount of pain from the stress and fear that he is feeling at that moment. He also states that it is one in the morning, showing that he could possibly have one of the symptoms of Anxiety Disorder, insomnia. The story also says, “I trembled excessively; I could not endure to think of, and far less to allude to, the occurrences of the preceding night. I walked with a quick pace, and we soon arrived at my college.

I then reflected, and the thought made me shiver, that the creature whom I had left in my apartment might still be there, alive, and walking about. I dreaded to behold this monster; but I feared still more that Henry should see him. Entreating him, therefore, to remain a few minutes at the bottom of the stairs, I darted up towards my own room. My hand was already on the lock of the door before I recollected myself I then paused; and a cold shivering came over me. I threw the door forcibly open, as children are accustomed to do when they expect a spectre o stand in waiting for them on the other side; but nothing appeared. ” (Frankenstein, chapter five) It is showing that Victor become so nervous that the creature would be in his room that he began to shiver and make Henry Clerval wait downstairs, just incase. He shows a great fear in seeing the monster in his home, where he had even left it. This disorder is easily recognized by his constant obsession and worry about the creature. He had run away from the monster, ignored it when it had killed most of his family and then ended up hunting it down until his death.

Thus, Anxiety is a very common illness around the United Stated and it might be difficult to deal with at the time, but it can be treated easily with the correct forms of therapy or medications. Anxiety often causes many other disorders if not properly treated and can affect your daily life. This disorder was even expressed in Frankenstein with Victor’s constant fear of his self-created creature. If you or anyone you know could be suffering from this terrible disorder, I suggest you find help relatively soon before it begins to spiral into other harder to treat disorders. 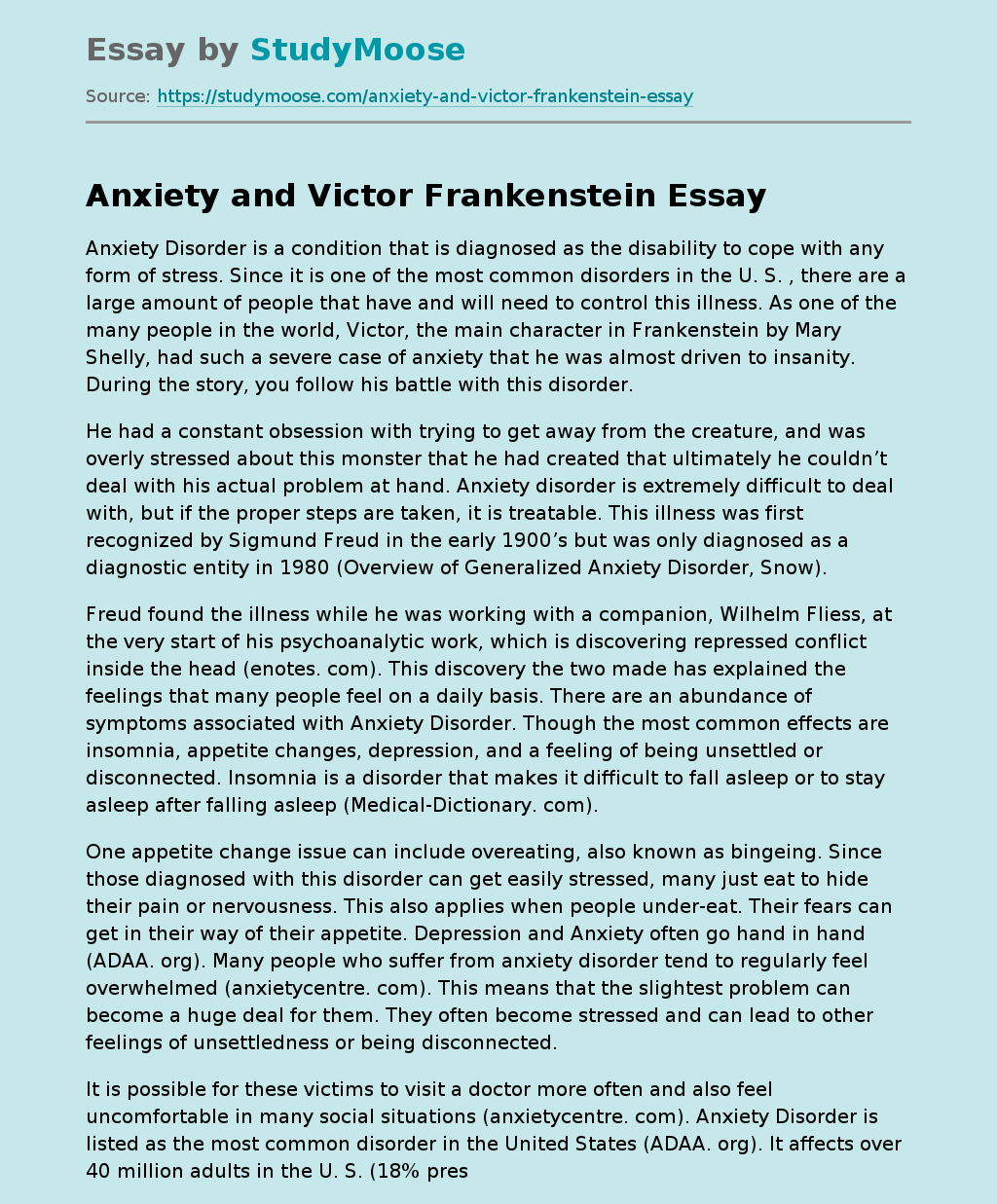