Anti-discrimination occurs when a person is treated less preferred than others because of their age, gender, ethnicity, disability or religion. Anti-discrimination also refers to the law on the right of people to be treated equally.

The Anti-Discrimination Act 1977 is an Act relating to discrimination in employment, the public education system, delivery of goods and services, and other services such as banking, health care, property and night clubs. The Act helps unlawful racial, sexual and other types of discrimination in certain circumstances and promotes equality of opportunity for all people.

Don't use plagiarized sources. Get your custom essay on
“ Anti Discrimination ”
Get custom paper
NEW! smart matching with writer

The Act was granted Royal Assent on 28 April 1977 and came into effect on 1 June 1977. It was the 48th Act of 1977. Since then the Act has been amended and reformed about 90 times Racial Discrimination happens when someone is treated less fairly than someone else in a similar situation because of their race, colour, descent or national or ethnic origin.

Racial discrimination can also happen when a policy or rule appears to treat everyone in the same way but actually has an unfair effect on more people of a particular race, colour, descent or national or ethnic origin than others.

Since the Act was passed in 1975, over 10,500 complaints have been received. The power of the national Parliament to pass this over-riding law arises under the “external affairs” power contained in the Australian Constitution. The power arose from the International Convention on the Elimination of all Forms of Racial Discrimination to which Australia is a treaty.

This use of the power in this manner was confirmed in the landmark High Court decision in 1982.

Disability Discrimination is when people with disabilities face huge social barriers at jobs, education and access to government. Disabilities also increase the chance of violence and other extreme forms of discrimination, as well as banished from family and institutionalization. In the 1960s and 1970s, young activists and scholars organized a disability rights movement to improve the quality of life for people with disabilities, modeled after other civil rights movements. In general, the legal rights and responsibilities of employees in relation with anti-discrimination may include that you have the same right to training, promotion and work benefits as other employees e.g. if you have a disability, employers must provide you with any special facilities or services you need to access training, promotion or work benefits, as long as this won’t cause them unjustifiable hardship. You generally have the right to stay on in your job if you have a disability, or you acquire a disability after you begin the job.

An employer can only dismiss you, medically retire you or make you redundant because of your disability. As when you apply for a job, your employer must provide any special facilities or services you need to continue to do your job, as long as this won’t cause them unjustifiable hardship. If there are non-essential parts of your job that you can’t do, your employer must make arrangements to cover these in some other way. As for Race Discrimination you have the right to report any incidents if a person has harassed/bullied you this might include: your race, color, nationality, descent, ethnic or ethno-religious background of any of your relatives, friends, associates or work colleagues. If this does occur these penalties can be brought up to court for a trial. Problems faced by people affected by Anti-Discrimination might include African Americans who are called names who are harshly abused and harassed because of their race and their skin colour.

All over the world, as a society we have been unable to accept being classified under one label. Our place as a racial state has changed throughout history, but still remains a mix of two ideas, racial dictatorship and racial hegemony, working to becoming a racial democracy. In the beginning, and for most of its history, from 1607 to 1865, most non-whites were firmly eliminated from politics. The racial dictatorship organized the “color line” rendering it the fundamental division in society. These “color lines” seem to be most prevalent in institutions where the color of your skin determined where you lived, what school you attended, and where you sat in restaurants and public transportation. It took real people from different cultures and grouped them into one generalized category.

Instead of being labeled as your country of origin or where you lived, like (Americans) or (Africans), they were simply labeled black, therefore making them seem inferior to the dominant race. By grouping them into one category of little meaning, it takes away from their individuality and culture. The dominant group, in this case the United States, survives by a mixture of forcing and giving permission. For instance, blacks were given the right to education, however the level of education received by blacks compared to whites is different. Far more white people attend higher education institutions as opposed to blacks. Of all the students enrolled in higher education institutions, 70 percent of them were white while the remaining 30 percent of students. There is a large disparity in these numbers, however compared to a couple of decades ago, minorities, especially blacks, weren’t even allowed to attend school. Minorities’ attendance is even on the increase while white attendance in higher education is decreasing. Between 1991 and 1995, while the white enrollment was decreasing the black enrollment was increased by 9 percent.

In the past the minority population made significantly less than the dominant race, and unfortunately it is still that way. While the gap is closing in disparity, there is still a huge jump in the earning of whites compared to those of blacks. Between 1980 and 1984, white men aged 18-64 made and hourly wage of $2.10 while there black counterparts only made an hourly wage of $1.86. (These men were performing similar jobs and yet the white male still made more earning than the black male. What also helped to close the gap was the black race was becoming educated and therefore more skilled. They were able to attend school now and become knowledgably in their skills and therefore make more money. These statistics should help to show that while racial disparity still exists, our dictatorship still exists but not as openly as in the past.

For instance, real estate agents are more likely to point a white couple in the direction of white neighborhoods and a black couple in the direction of a black neighborhood. While helping them both equally, they are dictating where the couple’s should end up. Until politics serves the people and not the politician’s motives, we will never reach a racial democracy. As long as people are still saying discrimination, we will never reach a racial democracy. These problems were resolved since the Act was passed in 1975; over 10,500 complaints have been received. The power of the national Parliament to pass this over-riding law arises under the “external affairs” power contained in the Australian Constitution. The power arose from the International Convention on the Elimination of all Forms of Racial Discrimination to which Australia is a treaty. This use of the power in this manner was confirmed in the landmark High Court decision in 1982.

The Civil rights act 1964 was enacted to ensure that people in protected classes were not treated differently when it came to employment decisions, such as hiring, promotions and termination. Companies had policies that openly discriminated against employees for reasons, such as color or sex that were not related to the quality of job performance. In order to make the workplace equitable in its treatment of all employees, the government made it illegal to consider the protected classes in work-related decisions. The Equal Employment Opportunity Commission (EEOC) received more than 93,000 complaints of discrimination in fiscal year 2009.

An employer may not intend to treat employees differently, but an employee behavior may have the impact of discrimination. For example, someone telling a sexually laced joke may not intend to harass an employee, but the impact of the conversation may have led to a hostile work environment. Employees who experience discrimination in the workplace may suffer from low morale, which directly impacts work performance. If employees do not feel valued for the work that they do, then they will not be motivated to continue to perform at a satisfactory or above satisfactory level. These employees may be more likely to seek jobs in other companies or to file discrimination complaints with the Equal Employment Opportunity Commission.

Although the EEOC filled just over 300 lawsuits out of the 93,000 complaints it received in 2009, the time and money used to respond to complaints may impact the company’s profits. Also, a complainant may receive a “right to sue” letter from the EEOC. This gives the employee the ability to sue in court for discrimination, whether the charges are true or false. Again, the expense to a company may be greater than if it had implemented policies and workplace behavior expectations that would give everyone a clear mind on what to do and what not to do.

Having a policy that forbids harassing behaviors by employees shows that the company is proactive in protecting the rights of all employees. Disciplining or firing employees or members of management who have been proven to act in a discriminatory manner is a good defense against a claim of disparate treatment. This could help the company avoiding the expense and bad publicity which could be a great help at the end.

Anti-Discrimination helps a lot of people around the people not only from work; it helps people from schools, shows and movies. It gives everyone a equal fairness on how they should get treated, and this why I think anti-discrimination is a great solution to make a world a better place. 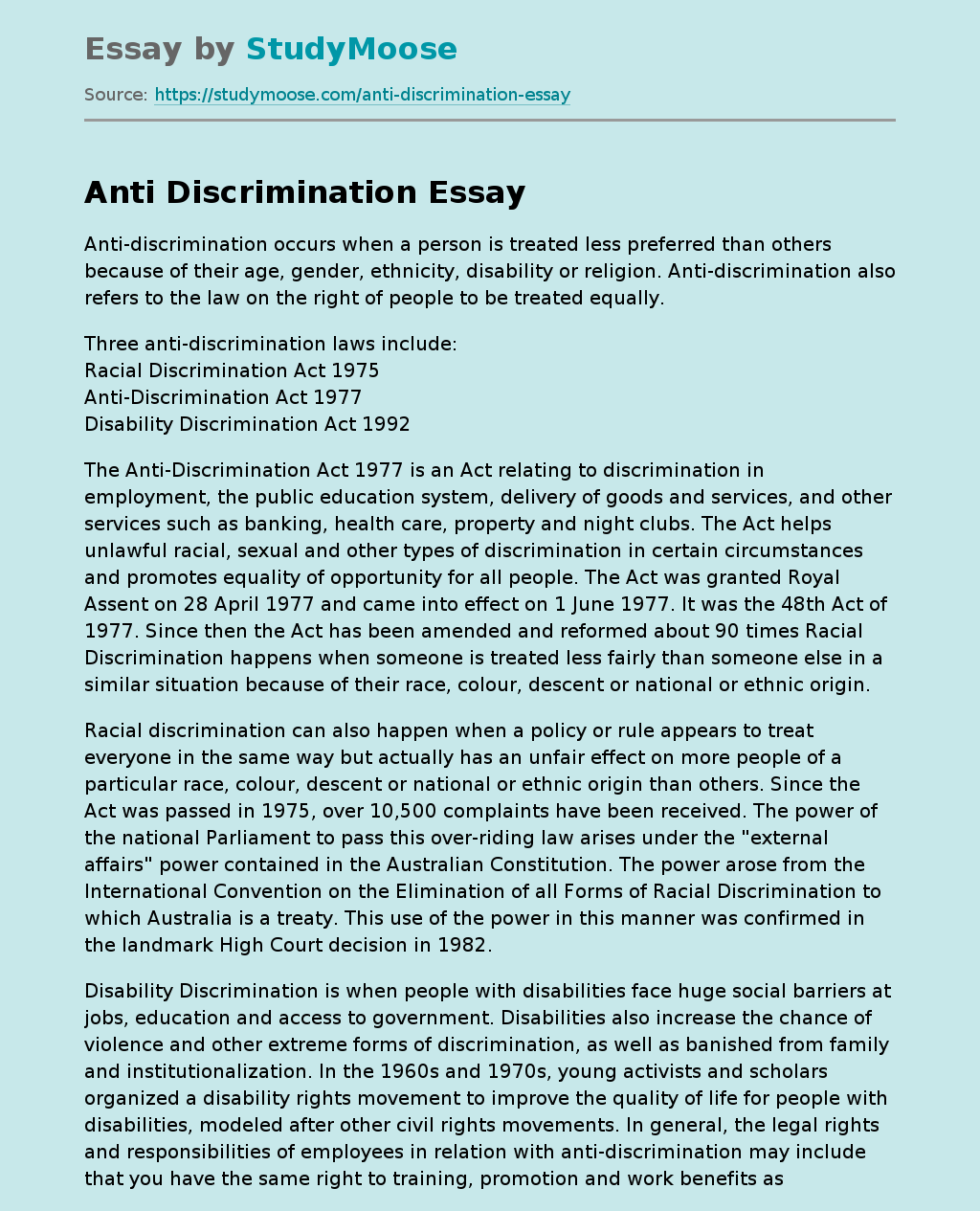