Corruption is found in the government when instead of thinking about the interests of the citizens as a whole, the members of the government are chiefly interested in promoting their own selfish interests. Corruption is found in both public and private organizations and everyone starting from the clerk to the Managing Director of a company is corrupt in a way or the other. The clerk takes small bribes from the people who visit the office so that their work is finished early than the others who are waiting in a queue.

Don't use plagiarized sources. Get your custom essay on
“ Anti Corruption ”
Get custom paper
NEW! smart matching with writer

In India, bribes are also accepted in a few temples where devotees offering bribes are given priority over others to visit the temple. Parents offer bribes in schools and colleges to get their child admitted. There is no institution, no organization which is not corrupt in a way or the other.

Thomas Hobbes, the great political philosopher, once said, “A man’s conscience and his judgment is the same thing; and as the judgment, so also the conscience, may be erroneous.

” This idea that individuals cannot always rely on a working inner moral compass alone to guide them to virtue is at the heart of the next motivating factor for participating in corrupt behavior. But the question that arises is that can an anti-corruption movement be started and if yes, shall it be successful. The answer depends largely on the adaptation of anti-corruption measures by both the government and the citizens.

People should be allowed to re-elect the candidate they voted for if he fails to fulfill the promises that he made while contesting the elections.

People are of the opinion that corruption is a way of life and nothing can be done to eradicate it. It is essential to understand that unless we as the citizens are not determined to do away with corruption from the roots, how we can expect the government to be corruption- free. Corruption is not a new phenomenon in India. It has been prevalent in society since ancient times. History reveals that it was present even in the Mauryan period. Great scholar Kautilya mentions the pressure of forty types of corruption in his contemporary society. It was practised even in Mughal and Sultanate period.

Nobody can be considered free from corruption from a high ranking officer. To root out the evil of corruption from society, we need to make a comprehensive code of conduct for politicians, legislatures, bureaucrats, and such code should be strictly enforced. Judiciary should be given more independence and initiatives on issues related to corruption. Special courts should be set-up to take up such issues and speedy trial is to be promoted. Law and order machinery should be allowed to work without political interference. NGOs and  media should come forward to create awareness against corruption in society and educate people to combat this evil. Only then we would be able to save
our system from being collapsed. Development of the country is hindered by immoral acts of political leaders and their indulgence to the corrupt party members. They are plundering the national assets. We all have our contribution to the creation of this prevailing situation which is now making us suffer. Dishonest persons came to power through our support and our vote. We failed to support and vote honest persons in the political process.

Now-a-days corruption can be seen everywhere. It is like cancer in public life, which has not become so rampant and perpetuated overnight, but in course of time. A country where leaders like Mahatma Gandhi, Sardar Patel, Lai Bahadur Shastri and Kamraj have taken birth and led a value-based is now facing the problem of corruption. When we talk of corruption in public life, it covers corruption in politics, state governments, central governments, “business, industry and so on. Public dealing counters in most all government offices are the places where corruption most evident. If anybody does not pay for the work it is sure work won’t be done. People have grown insatiable appetite for money in them and they can go to any extent to get money.

Undoubtedly they talk of morality and the importance of value-based life but that is for outer show. Their inner voice is something else. It is always crying for money. It has been seen the officers who are deputed to look into the matters of corruption turn out to be corrupt. Our leaders too are not less corrupt. Thus the network of corruption goes on as usual and remains undeterred. Corruption is seen even in the recruitment department where appointments are ensured through reliable middle agencies. Nexus between politicians and bureaucrats works in a very sophisticated manner. Nexus does also exist between criminals and police. Everybody knows that criminals have no morals, hence nothing good can we expect from them. But police are supposed to be the symbol of law and order and discipline. Even they are indulged in corruption.

This is more so because they enjoy unlimited powers and there is no action against them even on complaints and sufficient proof of abuse of office atrocities and high handedness. Corruption can be need-based or greed-based. Better governance can at least help to check need-based corruption. Better governance can check greed based corruption also because punishment for the corrupt will be very effective and prompt in a better-governed country. The steps should be taken to correct the situation overall. Declarations of property and assets of the government employees are made compulsory and routine and surprise inspections and raids be conducted at certain intervals. Though it seerris very difficult to control corruption but it is not impossible. It is not only the responsibility of the government but ours too. We can eliminate corruption if there will be joint effort. We must have some high principles to follow so that we may be models for the coming generation. Let us take a view to create an atmosphere free from corruption. That will be our highest achievement as human beings.

Problems in governance occur when a government is not only corrupt, but also when it is inefficient, unresponsive, or secretive. Essentially, when a government is ineffectual, it is considered to be corrupt. As this unit explained, corruption is fundamentally caused by low wages, poor incentive structures and inefficient systems. In addition, it is also caused by the desire for an unfair advantage, and the knowledge that one will not be caught or punished for corrupt behavior. Corruption is not just about ethics. It is also about how the government is set up and managed. Parliament and parliamentarians improve the way government works so that corrupt behavior is punishable and opportunities for corruption are limited through the laws. In order to fully rectify corruption in a society, it must first be thoroughly diagnosed. Unit three shows methods for diagnosing, measuring, and interpreting data on corruption. As the units thereafter will explain, this step will help to make focused and measurable changes and improvements to corruption when those mechanisms are enacted. 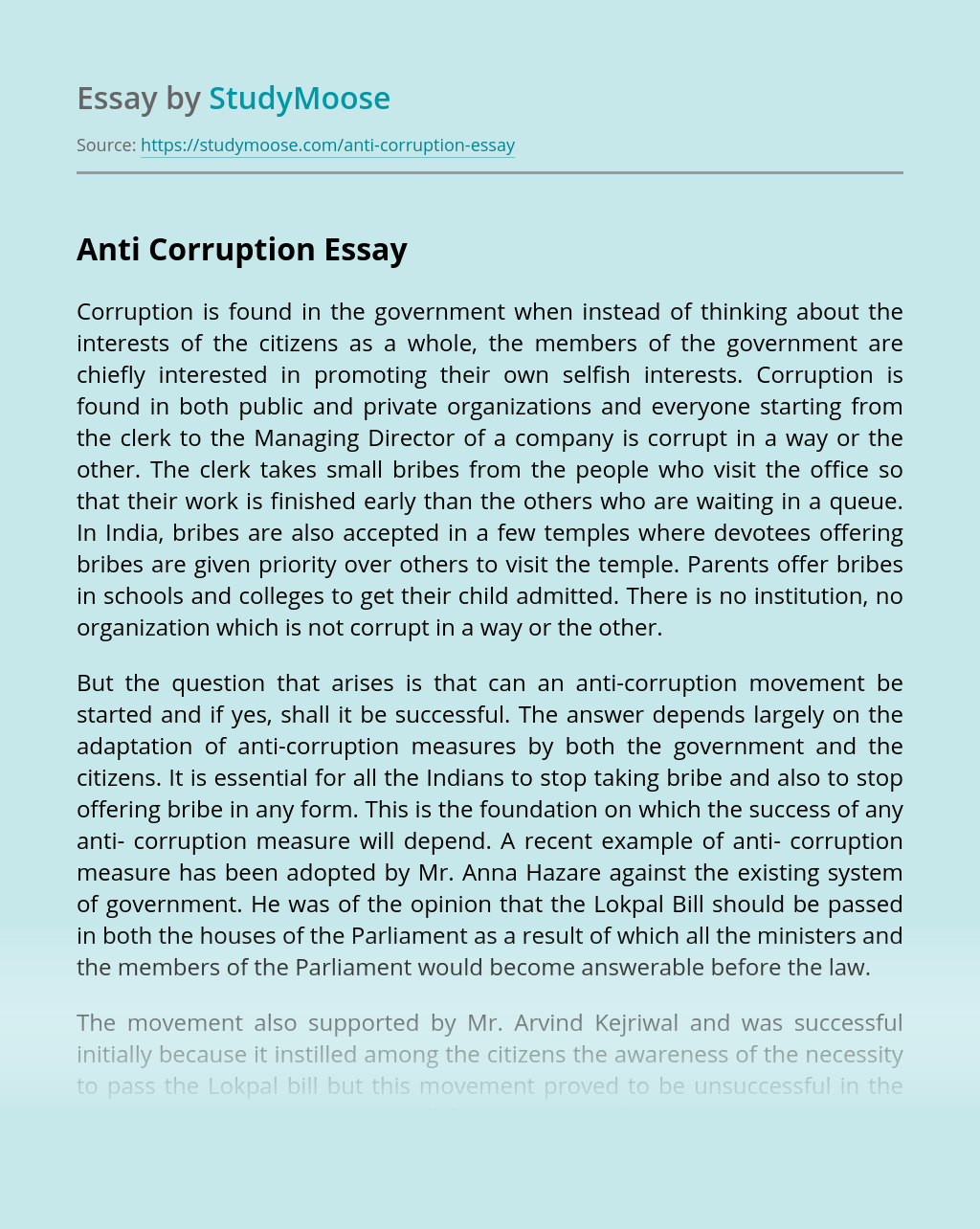